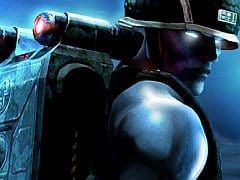 Rogue Trooper surprised quite a lot of people on its release in 2006 for the PS2, Xbox and PC. Games based on comic books are rarely good, and studio Rebellion had something of a mixed history when it came to developing quality games, so no one expected much from a third-person cover-based shooter starring a blue action hero. Given the Wii’s success and its lack of quality third-person shooters Ubisoft’s bid to bring the game to Nintendo’s console seems like a shrewd move, but how has the gameplay translated to the Wii’s unique control set -up?

Rogue Trooper is set on Nu Earth, a land torn apart by war as the Norts and Southers battle for control. You play as one of the Southers’ Genetic Infantrymen (G.I.s). These laboratory-created, blue super soldiers give the Southers an upper hand in the war, but a G.I. General betrays the squad during a mission in the Quartz Zone, and the entire G.I. battalion is wiped out – all except one. As the ‘Rogue Trooper’ you set off to bring the traitor to justice.

If you’re worried about not being able to follow the story because it’s based on a comic, you needn’t be. The story is told without any prior knowledge being necessary, and while the narrative is strong, it’s not the focus of the game. Rogue Trooper is the star, along with his buddies. You see, while the bodies of his comrades were killed, their minds lived on inside bio-chips. Rather bizarrely these chips can be placed inside equipment, so Gunnar is placed on the gun, Helm on your helmet and Bagman on your rucksack. This effectively gives you a four-man team in one soldier, and lets you do a little more than your lone-soldier status would suggest.

Each of your bio-chip buddies can be used in various ways, with Gunnar coming in handy as a deployable gun-turret and a stabilised sniper rifle, Helm is a dab hand at hacking computer terminals (despite simply being a helmet), and Bagman uses scrap (gathered from fallen enemies) to make new ammo, weapons and upgrades. This isn’t all of it though, as you’ll also get a handy holograph ability, some really cool mines and plenty of weapons. The opening levels introduce various new abilities, but by the time you’re half way through the campaign, battle tactics are literally bursting from Bagman’s rucksack.

It’s a shame that this Wii version doesn’t add any new story content, but there is a completely new Wii-oriented control scheme. Shooters have been hit and miss on the motion controlled wonder, so it’s a relief to say that everything works well here. Pointing and shooting with the aid of a target lock-on rarely causes any problems and the increased level of control helps when aiming your sniper rifle. The only real issues arise when trying to use the Nunchuck to throw grenades and twisting the Wii Remote to alter the zoom level of your sniper. Both take a little getting used to.

Each level and set-piece can be tackled in a number of ways, and it probably won’t be until you’ve finished the game for the first time that you realise how you could have done things differently. With all the tools you have at your disposal it’s worth taking a moment to assess the situation at hand. While you could charge in, guns blazing and grenades flying all over the place, you could also send the holographic you out to the side to catch the enemy’s eye, while you sneak round the left and stealth kill a number of them from behind. Or you could use another combination of tools to play the section in an entirely different way.

The game begs you to play through it again. Although the final confrontation goes overboard slightly in terms of you being outnumbered, it makes you think about what you’re doing. It’s pretty easy to focus on a couple of tactics for most of the game (at least on the standard difficulty setting), but to bring down the traitor in the big finale you absolutely must play like there’s more than one of you on the team. Whether it’s the handy mine drop as you’re running or the deployable gun turret, by the end of the game you’ll want to go back through on a harder difficulty level to show the Norts who’s boss.

While praising a game for good AI is getting more and more common, it really is worth commending here. Enemies don’t fall for the same stupid traps that they do in most shooters and they’ll actively take cover and work as a team to take you down from your concealed position. Even on the lowest difficulty setting they put up a decent fight, and there’s a nice variety of troop types that each have their own attacks.

Having expected very little from the game, it’s amazing how many small touches Rebellion has included that raise the quality that bit higher: the animations each time you change your weapon or add a silencer to your gun are brilliant; the nicely explosive gas cylinders that enemies carry on their backs are perfect sniping targets; and throwing grenades while remaining in cover comes in handy on many occasions. The list could go on and on. If appearances are ever likely to deceive you, it’ll be with Rogue Trooper. It’s a far more intelligent and well designed game than many people will give it credit for.

Rogue Trooper originally arrived on PS2, Xbox and PC in 2006 and for the most part this Wii port looks the same, but a few enhancements have been made. Environments are large and levels are diverse, while retaining the feeling of being part of the same Nu Earth location. The addition of improved water and smoke effects give the game a more modern look and for the most part the frame rate manages to stay solid. There’s little like this on the Wii and, for once, a multiformat title doesn’t seem like it’s been haphazardly shovelled over to Nintendo’s console. Your experience is bolstered by a strong musical score throughout, and some solid voice work. Some lines come off as a little cheesy, but the frequent comments from your buddies are excellent, and weapon effects fit nicely with the strong arsenal that doesn’t feature a weak link.

Split-screen multiplayer for up to four is also an option, with players taking part in single-player-esque scenarios against bots. The action takes place over a number of large maps and the tactical gameplay translates well to the multiplayer arena, but without online support you’re either going to have to fend off the enemies alone or with mates gathered around a single TV.

The team at Rebellion (and Reef, who handled the Wii version) have crafted a tactical combat game that hits the target so often that slight wavering every now and again can easily be overlooked. It would be easy to dismiss Rogue Trooper as the game where you play as a blue man with a talking gun, helmet and rucksack, but that blue man deserves a place in your Wii collection.

t would be easy to dismiss Rogue Trooper as the game where you play as a blue man with a talking gun, helmet and rucksack, but that blue man deserves a place in your Wii collection.
8 A squad in one man Some graphical flourishes Solid third-person gunplay Grenades are awkward

A Genetic Infantryman (G.I.), Rogue is one of an elite regiment of…

A Genetic Infantryman (G.I.), Rogue is one of an elite regiment of…