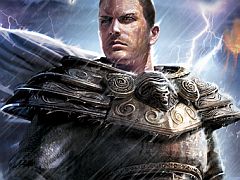 The thing is, some people actually like their role-playing games like this. They love the slow burn. They love spending 10 hours walking aimlessly around Harbour Town, talking to awfully-modelled and generically-voice-acted NPCs, with absolutely no idea what they need to do to get quests finished. Well, there’s no accounting for taste.

Risen had potential. It’s got a lot of cool ideas bubbling under the surface. The story itself is an interesting tale that sees you, a stowaway on a ship sunk by a storm, washed up on the shore of Mediterranean-styled Faranga Island, which is suffering from mysterious earthquakes and the scramble to control treasure-filled ruins that have suddenly sprouted (hence Risen) from the ground. And the moral dilemmas the game poses are, in many ways, better executed than anything seen in BioWare’s or Bethesda’s best. After only 20 minutes you’re asked to make a decision that’ll drastically alter the rest of the game: should I align myself with the raggedy Outlaws or the brutal Inquisition? At first, the game’s NPCs make you feel that the Outlaws are the “right” choice, fulfilling the classic Rebel Alliance role, but the more you play the more you get a sense that there’s more to both factions than meets the eye.

For example, one quest sees you trying your hand at Hercule Poirot-style crime solving. A burglar is on the loose and it’s clear he has a spy scoping out storehouses. But who is it? You need to spend time interviewing the main players, asking them who was hanging about at the time of the theft. Not only do you have to identify a suspect, but find some evidence, too.

Another nice touch is the complete lack of a morality system. There’s no positive or negative karma, no paragon or renegade alignment. You never make a decision that affects how good or bad you are. There are just quests that need to be resolved, factions that can be joined and played off of each other, and NPCs that pay for your services. Risen doesn’t judge your decisions, which is something of a rarity in this genre.

So, everything’s set up for an epic, engaging single-player RPG experience. The problem is that all the good in Risen is unceremoniously snuffed out of existence from the very moment you wake up on the island’s shore. Risen’s ridiculous refusal to help you, even a teensy weensy bit, is its undoing. Everything, and I mean everything, seems designed to piss you off.

First off, the Xbox 360 version of the game (the version tested) is a technical mess. The framerate is abominable. You can see it chug even when you’re just walking about in the day time. The game’s horribly dark, but when night time comes it’s nigh on impossible to see anything. So, you use a torch to light your way. “Hold on there buddy”, Risen says. “If you’re going to use a torch, then give me a sec. I need to prepare myself for a heart attack.”

If the framerate doesn’t shock you, then the graphics surely will. From a distance Risen looks impressive in parts. Settlements are well populated – indeed perhaps Risen’s greatest achievement is its success in nailing that coveted living-and-breathing feel. There are loads of NPCs simply living their lives – blacksmithing, farming, guarding, whoring themselves (that’s right, there are prostitutes in Risen). Everything and everyone looks worn. Faranga Island is a lush place, with some nice vistas, although it’s such a death trap that you’ll be too busy running away from beasties to enjoy it.

When viewed up close, however, Risen reveals itself to be one of the ugliest games of 2009. NPC faces are laughable. The lighting, especially from torches, is terrible. In one room we explored, our torch cast a light on the walls, as you’d expect it to. But moving a fraction to the left caused the lighting to completely disappear, despite our character still holding the burning torch. It was like turning a light switch on and off.

There are hundreds of noticeable graphical glitches. The running and jumping animations of the main character seem to be lifted straight out of a PSone game. And in some cases, especially on rock formations, there are what looks like missing textures – the game development equivalent of an own goal. Risen on 360 looks like an outsourced hack-job.

Then there’s the menu system. Again, it’s worth stressing that this is in reference to the Xbox 360 version of the game. The menus are so poorly designed that every time you use them if feels like the game is tying your hands behind your back and punching you in the gut. Up on the d-pad brings up your inventory, left brings up your quests, down brings up your maps and right displays your character stats. It’s terribly clunky to navigate. Simply scrolling to the quest you want to deal with seems to take an age, because the game doesn’t remember what quest you looked at last.

Navigation in general is incredibly frustrating. The various maps just confuse the issue. Blue and red dots show you relevant NPCs, but there’s nothing displayed to tell you where you need to go next to get on with a quest. A simple mini-map would have helped enormously. It might not have been a particularly realistic addition, but that’s not the point. Risen’s a video game, and video games should be fun, not feel like pulling teeth.

When Risen decides to break out into a walk, it’s usually because there’s some fighting to be done. Don’t hold your breath though – it’s hard to describe just how bad Risen’s combat is. The A button hacks. The B button blocks. There’s a ridiculous dodge move and a near impossible to nail parry/counter. That’s your lot for the first 15 hours of play, during which you’ll dread having to unsheathe your sword because you’re weaker than an amoeba. Faranga’s giant wolves and other fantasy beasts tear you a new hole without so much as breaking a sweat. The only way to win a fight is to turtle behind your shield and to take occasional swipes. You’ll be knocked out a hell of a lot in combat and when it happens you’ll curse the developers – since NPCs nick your cash, swords and shields. It’s soul destroying – a game design relic of a bygone era – and it’ll make you want to rage quit the game every time.

Key to any good role-playing experience is the ability to level up your character, tailoring them to your play style and micro-managing every last detail. It’s surprising, then, to find that for such an unforgiving, hardcore game, character development feels automatic. Bar a decision about whether you fancy specialising in magic or traditional weapons, Risen keeps most of the good stuff to itself. For a start, you level up so slowly (after 10 hours I was only level four, not for want of trying) that you never feel motivated to complete “just one more quest”, since there’s nothing good to come of it. In fact the only thing you feel like you have any influence over is improving your skills, like sword fighting, magic and thievery. But to do so, not only do you have to spend Learning Points (gained when you level up) with trainers, but give them gold, too. And gold, in Risen, is as scarce as water in the desert.

All these issues conspire to enclose Risen in an impenetrable brick wall with a tiny door that only a select number of people who own the special key of doom can open. I hit the wall after about 15 hours of play, as I simply couldn’t work out what I had to do next to progress the story. You may well end up as an absolute bad ass by the end game, but why should I suffer to get there?

I know what you’re going to say. “So what? The game’s supposed to be like that? It’s a hardcore RPG! You just don’t get it. Go back to playing WoW, noob!” Well in this post Oblivion, post Fallout 3, post Fable II world, Risen’s got no excuse, especially on the Xbox 360. As an Xbox 360 RPG, even as an Xbox 360 fantasy RPG, it’s so unpolished, so devoid of the oomph demanded of current gen games, so inaccessible and needlessly punishing, that it’s offensive. The issue is not time: Great role-playing games are always huge time sinks, and Risen is no different – it’ll easily last you 60 hours. The issue is enjoyment. If Piranha Bytes hadn’t designed Risen while giving accessibility the finger, then it would have had a chance of being a slow burning but absorbing RPG. As it is though, it’s impossible to recommend. You’re better off playing through Bethesda’s Oblivion, even if it’s for the 50th time.

As an Xbox 360 RPG, Risen is so unpolished, so devoid of the oomph demanded of current gen games, so inaccessible and needlessly punishing, that it's offensive.
5 Believable plot and quests Woefully unpolished Awful combat Unnecessarily inaccessible