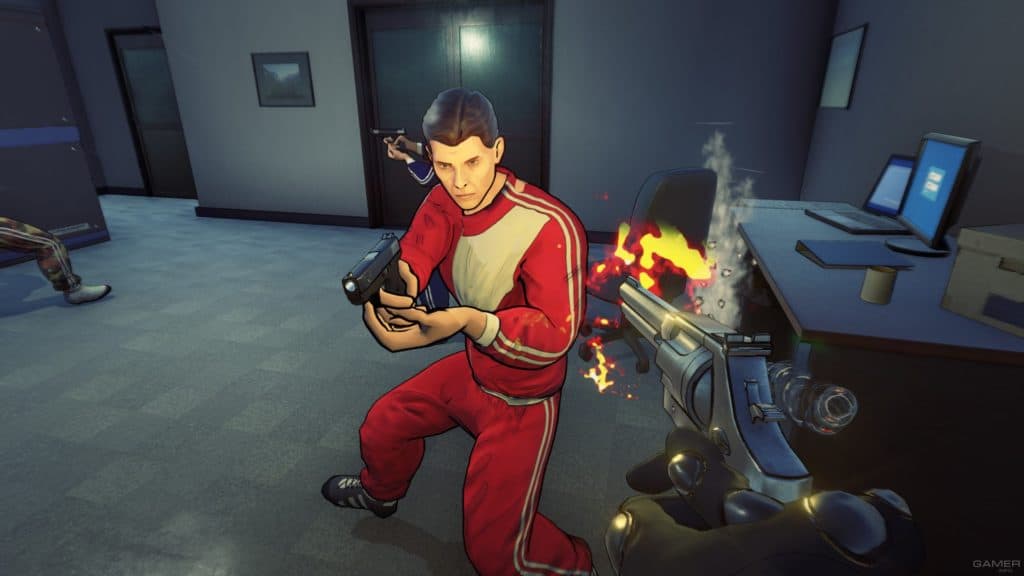 If you favour the simple and the expedient, you’ll find the premise of RICO appealing. The setting is San Amaro, which is described as ‘a city where any street criminal can become a kingpin and every meth head is an entrepreneur.’ The person doing the describing is Commander Karen Redfern, a woman whose hair – and whose heart – seem made of iron. She has chosen you (a ‘one-of-a-kind rapid response unit’) to stem the tide of a crime wave by ‘any means necessary’ – but mainly the following two, suggested by an early loading screen: ‘Kick doors… shoot men.’ The game can be described, summarised, pitched, praised, and condemned with those four words.

Your mission takes you through a web of sparse interiors, each scrambled together with procedural generation and stapled with smudged textures. Each room is to be breached and cleared of criminals. When you smash a door inwards, time slows, allowing you to ratchet up as many kills as you can before normal speed resumes. It’s a good hook: somewhere between Rainbow Six Siege, with its charges that give you the explosive element of surprise, and Max Payne, with its cloudbursts of bullet time.

RICO’s art style, too, works quickly to grab at your attention. It’s cel shaded, with black lines trapping the colours and tilting toward a comic book aesthetic. Given that the game makes its bed in the murk of B-movies, the look lends it a certain pulpy kitsch. It’s reminiscent of conspiracy thriller XIII, which wore its colours – all the hues of tobacco and toffee – to transport you to the ‘70s, the golden era of paranoia. But there’s no such purpose in RICO, and any impression it has on you initially dissolves after a couple of missions. It uses its empty style like wallpaper to cover the cracks in its design. 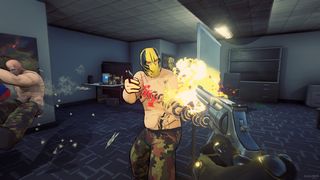 The first, and the deepest, of which is the framerate. It moves at a constant jitter, as if the game is running on espresso. This compounds the already fitful aiming, which responds to your movements with an elastic lag, causing you to lurch off target by a foot or so and halting what should be a rush. Moreover, it means the best tactic turns from a siege to a standoff; given that your aim is jerky, it’s safer to filter your foes through doorways and blast them one by one. (I played on a base PS4 and a PS4 Pro; neither ran smoothly.)

The other problem is the basic structure. Each case contains a number of levels, which appear as nodes on a map, like push pins strung together on a corkboard; they lead you to the local kingpin, and get progressively tougher. As you complete each stage, you’re rewarded with merits, and you use these to buy health packs, weapons, and upgrades. If you die without any revives, in the middle of a mission, then that case, and all your progress, is blown – meaning, you have to start a fresh case, complete with a dull training mission  crammed with wooden target dummies. Every. Bloody. Time.

More enticing are the daily challenges, which give you better weapons from the off and get you straight into the action. On top of that, there are quick matches, which do precisely what you think they might. The cases seem bloated next to these modes, especially considering that everything the game has to offer is best served in speedy fashion, and with as little loitering as possible. Of what use is a sense of progression when a game’s thrills are best served still, wrapped up in the rooms of a corridor? 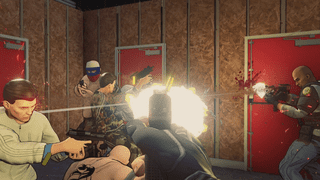 The same goes for the RICO’s narrative, which, thankfully, has the good sense not to exist. Redfern’s opening tutorial video provides the first and last words as far as plot is concerned, and each of your enemies is covered with tattoos and tracksuits so as to show off their shadiness. All you need worry about is the aforementioned kicking and shooting, and if this starts to thin then there’s co-op play to think about.

The developer is Ground Shatter Games, who made SkyScrappers – an intriguing jumble of platforming, fighting, and vertical scrolling as you leapt up the debris of falling buildings. It, too, was hampered by imprecise combat and clunky movement, so Ground Shatter leant on co-op to add more fun to the crumbling chaos. It just about worked. But RICO’s shortfalls aren’t the sort to be helped by heaping another player in to the mix; the action is shaky enough without halving your view with local split-screen, but even when playing online, it isn’t as if the game calls for tight teamwork. Having someone else crashing along with you only shaves the time it takes to finish a level.

I say all this with a mounting sense of sounding churlish, and the irritations of RICO are that much more potent for the intriguing kernel at its core. It seems the sort of game that could do with more time – to see its rougher edges varnished, to see its ideas developed. Not that ‘Kick doors… shoot men’ needs any development; it’s the stuff around it. The more I played the game the more those words rose above the clamour. How frustrating that such brilliant simplicity be scuppered by strained mission design and a fragile frame rate. If you like the idea of RICO, my advice would be thus: ‘Kick doors… shoot men… wait for patch.’

Available on: PlayStation 4 [reviewed on], Xbox One, Switch, PC 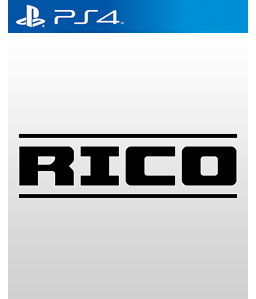