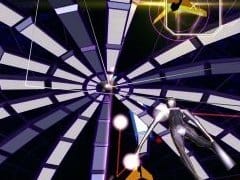 “Games are art!” Just over five years ago, that was the collective catchphrase of the video game industry. Developers, journalists and academics practically shouted it out, fists in the air, proud and defiant.

After decades on the receiving end of snooty looks down upturned noses from the worlds of cinema and literature, finally video games were filling galleries and national newspapers. Suddenly hip London thirty-somethings could mention the PlayStation over their mocha without fear of aloof glares from liberal friends.

And the champion of this sudden lunge by the industry for the culture jugular of the Guardian reader? A traditional on-rails shooter from Sega by the name of Rez that took the epitome of soulless, ‘time wasting’ arcade gaming and turned it into a dazzling overload for the senses.

At the time though, futuristic screenshots and consistently high review scores weren’t enough. In essence, Rez takes almost all control from the player. As your avatar drifts through a tangled web of wire-frame buildings and heavily outlined enemies, all you do is scroll a targeting reticule over your foes and unleash bullets.

But those who didn’t actually play the game couldn’t begin to imagine just how exciting and involving legendary game maker Tetsuya Mizuguchi could make such a basic experience. So it’s with great anticipation that Rez HD arrives on Xbox Live. Though there’s little new in the package, widescreen and HD visuals have exponentially improved what Rez offers, and at less than seven pounds sterling cautious gamers have little reason not to pick up this benchmark of interactive perfection.

If you’ve missed the fact somehow, Rez is the embodiment of ‘synaesthesia’ games. In other words it fuses visuals and sound inexplicably with the player’s input. You don’t directly create the graphics or soundtrack, but you sure as hell feel like you do, and it certainly feels like they lead you.

Unleash a volley of missiles for example, and as they hit their targets with perfect rhythm a flurry of notes rasps from your speakers in time with each explosion. As the action increases, the thump of the trance soundtrack’s bass pounds and the throbbing controller leaps from your hand, and as a whole the experience ropes you in like nothing before it.

Aside from additional achievement points and the ability to cover yourself in simultaneously vibrating controllers the game is essentially the same, but it is hard to overemphasise just how much the HD experience adds to proceedings. Describing the visuals without being pompous is near impossible. The original game’s retro-futuristic lines have now become gleaming slashes of neon on a pitch-black canvas, and enemies glittering electronic fireworks.

Rez might have lost its revolutionary edge, as nearly six years is a long time in gaming, and to hardcore shooter fans it is perhaps slightly undemanding, whereas the mainstream may find it rather short. Yet this refinement of a modern classic that perfected the conception of a new genre is still staggering to behold.

Games aren’t art. Games like Rez laugh in the face of art. Mizuguchi’s creation looks up at art from the gutter and sneers. Even the most modern, pretentious, sensationalist piece of art can’t hope to rival Rez’s bold blend of craftsmanship, fun, interaction and sensory tantalisation. While art hangs on the walls in plain white rooms, Rez is out in the playground and at the front of the rave, and you’re obliged to join it.

Games aren't art. Games like Rez laugh in the face of art. Mizuguchi's creation looks up at art from the gutter and sneers.
9 A damn fine on-rails shooter A sensory feast that is amazingly satisfying to play A vast visual improvement Some of its revolutionary edge is lost