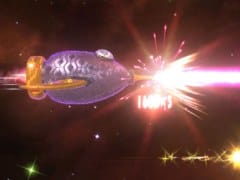 Retro/Grade’s concept is novel, but about as easy to describe as the plot of Back to the Future to someone who has absolutely no ability to comprehend time travel. Indie developer 24 Caret Game’s début effort is a side-scrolling shooter that has already been completed, and it’s the player’s job to accomplish everything backwards with Guitar Hero style rhythm action.

In order to maintain the integrity of the space-time continuum (don’t ask), hero Rick Rocket must re-absorb every shot fired, un-dodge every attack, and reverse-o-kill every enemy. By using either the Sixaxis’ D-pad or a guitar controller’s fret buttons, you must guide Rocket between up to five lanes to reverse all of his previous heroics.

Guiding Rick Rocket’s ship into the path of oncoming lasers will absorb the shots from ever being fired in the past, while moving the shuttle out of the way of enemy projectiles will cause enemies to un-fire their own bullets. While the concept might be tough to explain, it allows 24 Caret to integrate a sly twist on typical rhythm games by having you simultaneously dodge and hit varying on-screen markers.

Retro/Grade is all about being in the right lane at the right time, then, similar to classic racing games like Le Mans and Speedway, and it’s a task that I found a lot easier to accomplish when using a guitar controller.

As you might expect given Retro/Grade’s reversed gameplay, the aim of each level is to get the lowest score possible – you start at the end of the level and must then do the best you can to reset your score to zero. Players can use score boosters to increase multipliers in order to bottom out their points faster. So far, so Guitar Hero.

You can also make use of a fast-forward (rewind) function to undo (redo?) your mistakes. Although it sounds like it adds another layer of complexity to an already mind-bending game, it’s essentially another version of the rewind mechanic we’ve seen in plenty of games over the years.

But Retro/Grade’s main campaign is extremely short, offering just 10 levels that can be played through on normal difficulty in around an hour. With the fast-forward function and generous health bar it’s pretty hard to die, so the game instead penalises your score for missing lasers and being hit by enemies. Using a guitar as a controller is even more useful on higher difficulties, as you can zip between multiple lanes far quicker than with a controller, but the rhythm of the game never reaches the kinds of speeds necessary to really get your heart pumping.

But the crucial issue is the music. A rhythm-action game lives and dies by its soundtrack, and sadly Retro/Grade’s gets old very quickly. I found myself bobbing along to the beat as I played through each level, but with just a handful of tracks on offer there isn’t nearly enough to keep you interested for long.

Challenge Mode adds a little more depth to the experience, with Rick’s ship starting at the beginning of a 130-challenges long map. By achieving near-perfect scores on certain levels, secret paths open up, allowing you to skip sections you find too easy. Mirror modes, no lane colours and other factors are added to levels.

While Challenge Mode adds a little more variety to Retro/Grade, it still doesn’t make up for the repetitive gameplay. The levels in challenge mode are rehashes of the campaign with caveats. Combined with the repetitious songs, there isn’t enough to make me want to play through the 130 challenges on offer. Despite numerous unlocks littered throughout the map, it’s the lack of variety in the gameplay itself that holds the game back. The increase in difficulty simply adds more lanes, and doesn’t really change the sequence of a level.

Retro/Grade is built on a unique idea that simply isn’t explored in an exciting enough way or to a sufficient depth to keep you interested for long. It’s a shame, then, but there just isn’t enough of a reason to spend much time with Retro/Grade.

Retro/Grade is built on a unique idea that simply isn't explored in an exciting enough way or to a sufficient depth to keep you interested for long.
6 Good idea Great art style Very short campaign Limited soundtrack