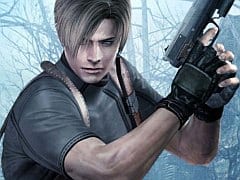 Having finished Resident Evil 4 twice before (once on GameCube, and again on PS2 for the Separate Ways campaign) I thought I’d be able to storm through the rereleased version on Xbox 360 and PS3. How wrong I was. The initial assault by the villagers proved too much to handle, as I suffered death at the hands of the first chainsaw guy. It seems the last six years haven’t been kind to me. Thankfully, this isn’t something which can be said about Resident Evil 4.

It’s the controls that takes the most getting used to, with the camera operating independently of Leon, aiming and moving both mapped to the left analogue stick and shooting mapped to a face button. My brain simply struggled to accept a control scheme so alien in 2011. Chances are you’ll have a similar problem, but it’ll be fleeting. Once you’re in tune with the laser sight, quick-turn and the inability to strafe, Resident Evil 4 still stands as one of the greatest action titles you’ll ever play.

The setup is pretty straightforward. As Leon S. Kennedy you must find the President’s daughter, Ashley, and return her safely. You’re dumped outside a rural village somewhere in Europe and left to fend for yourself, armed only with a knife, handgun and basic herbal remedy crafting skills. Something isn’t right with the villagers, and their attack in the opening few minutes is just the tip of the iceberg; some truly unpleasant creatures lie ahead.

Back in 2005 Resident Evil 4 felt like a huge departure for the series, with its switch from full-on survival horror to a heavier emphasis on action, but these days it merely falls somewhere between the original titles and Resident Evil 5. For those of you who were displeased with Capcom’s choices with Resi 5, the good news is that 4 still manages to feel like a horror title, and doesn’t require cooperative play to be enjoyed at its fullest.

The game’s limited ammo, rooted-to-the-spot gunplay, and ensemble of hideous creatures make this feel like an old-school Resident Evil game, despite its radically different appearance. Puzzles still play a key role, although not to the extent of the previous games in the series. Meanwhile Quick Time Events, a mechanic that seems to be on holiday from the industry at the moment, crop up frequently in some excellent interactive cutscenes.

What isn’t so great if you’re coming to the game with a 2011 mindset is the clumsy inventory system. Years ago it never seemed problematic that you must manually enter the inventory screen to switch weapons, but these days it feels laboured and unnecessarily complicated. While you can learn to adapt to the controls, the inability to quickly switch between guns remains a slight chore.

Inventory issues aside, Resident Evil 4 stands up as a truly epic adventure, packed with memorable moments. If you last played the game a long time ago you might be surprised by a few things you’ve forgotten, and even if you remember every moment like it was yesterday, chances are you’ll still have a great time seeing it all again. The game’s numerous locations take you from the infamous village to caves, prison cells, lakes, laboratories and more, with each setting just as memorable as the last.

Key to the whole experience is the sheer sense of terror that can be conjured up by even the most low-key encounters. Due to the controls and limited ammo a fight against a few enemies can be extremely tense: you’ll desperately try for headshots, hoping to preserve ammo to save yourself from the dangers of knife combat at close quarters. The amazing night-time cabin siege, villagers storming towards you with torches and pitchforks in hand, is quite rightly considered a classic sequence in horror gaming, perfectly showing off Resi 4’s strengths. As the infected horde start to bash through windows and run up the stairs, your heart will be in your mouth.

While the game can feel terrifying at points, another awesome action sequence may lie just around the corner, with Leon using his levelled-up Riot Gun to take down a load of infected monks as if he were Rambo. Very few games have been able to blend these two gameplay styles together so well, meaning you’re never comfortable, forever worried about what might lie ahead. You’ve also got Ashley to consider once you find her. While she’s mostly useless at defending herself, that’s her role – and she therefore works well where Sheva did not.

There’s some backtracking at points, but it’s never a chore as you work through the generous 12-15 hour campaign, and then you’ve got a few more hours of content thanks to Assignment: Ada and the Separate Ways bonus campaigns. On top of that you’ll probably want to play through the main campaign again using the New Game+ mode, and go for high scores in Mercenaries – the unlockable score attack mode which spawned the recent 3DS game. To say there’s a lot of content here for the money doesn’t do the package justice – it’s a veritable bargain.

What was lacking in Resident Evil 5 – and what bursts out of Resi 4 – is atmosphere, and a real sense of place. While the game’s visuals are looking a little dated (but by no means ugly), the world is exquisitely designed. The graveyard scene at night, in the rain, villagers with flaming torches, still looks brilliant, and the many boss encounters still deliver a real spectacle. The cast here is also superb, while the game manages to veer away from too much cheesy dialogue – something Capcom overindulged itself with for Resident Evil 5.

What isn’t so great is the frame rate, which isn’t silky smooth all the time – something of a disappointment given that this is simply an HD version of a last generation game. Other than this lone blemish, Resi 4 fares extremely well in 2011, and looks considerably better than the majority of other remade and revamped titles that have surfaced in recent months.

When I began replaying Resident Evil 4 HD for this review I thought I’d enjoy it again, but I’d clearly forgotten a lot of the really cool bits. While the opening chapter proved to be a lesson in re-learning how to play, once it all clicked again it became apparent just how much I love Capcom’s highly-celebrated game. For me it’s easily the best Resident Evil title, and an absolute must-buy for anyone interested in action or horror. Resident Evil 4 remains one of the greats.

Resi 4 is easily the best Resident Evil title, and an absolute must-buy for anyone interested in action or horror. Resident Evil 4 remains one of the greats.
9 Action packed Gorgeous despite its age Scary Inventory can cause problems