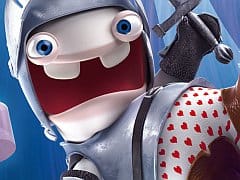 Time travel is always an interesting point of discussion. Special relativity, wormholes, parallel universes, Hawking’s chronology protection conjecture, flux capacitors – it’s the kind of thing that fuels heated debates late at night, usually after watching something like Lost or Donnie Darko. It’s accepted that the laws of physics permit time travel to the future – theoretically speaking, of course – but travel to the past is both technically and theoretically impossible (discounting the theory of travelling to the past of a parallel universe). The Raving Rabbids aren’t concerned with such limitations, however – they have a time travelling washing machine and aren’t bothered in the slightest about changing the course of history. They frequently do, in fact.

This is the basic set up for Ubisoft’s latest Rabbids game, which sees the strange little creatures flitting through time and disrupting key moments from Earth’s history along the way. Travel in Time is a return to the party game formula that defined earlier games in the series, an excuse to rally some chums together and merrily flail your limbs about in front of the TV. Yes, it’s a mini-game collection, but it compiles its activities with such a refined mixture of absurdity and charm that even core players are likely to have a good time. Once gimmicky and annoying, the Rabbids have now come into their own as established video game characters -a symbol for silliness in otherwise serious times.

A museum in 2012 acts as the game’s anchor in time, or to use more gamer-friendly lingo, its hub world. At the start you’ll choose a profile by walking into one of four toilets, of all things. After entering your name and preferences, your Rabid will emerge in the main hall of the museum, a roll of loo paper trailing behind him as he waddles about. As well as being quite humorous, this serves as a rather ingenious game mechanic: When playing multiplayer (which is of course how the game was designed to be played), each player will find themselves entangled with the roll of toilet paper. It ensures that everybody is kept on the same screen at the same time; you can only wander off as far as the bog roll will allow. It might be very silly, but it’s also rather clever.

Within the museum there are five doors, with each leading to a different style of mini-game. Within each room there are four or five different time zones to choose from, each offering a different twist on the theme. So across the five gameplay themes – Shootarium, Bouncearium, Runarium, Flyarium and Hookarium – there are actually a total of 23 mini-games. The Shootarium, for example, is all about satisfying the player’s itchy trigger finger. The Wild West take on the mechanic sees players shooting boulders from an out of control mine-cart. In Ancient Egypt, you’re grabbing slabs of stone off the back of enslaved Rabbids, and then flinging them at a pyramid construction site looming in the background. The first person to complete their pyramid, wins.

Other rooms offer completely different experiences. The Bouncearium is the area of choice for platform fans, putting the Rabbids in various situations where they have to run, jump and (of course) bounce through different periods of history. The Flyarium furnishes the little chaps with makeshift wings, where players must tilt the Wii remote and Nunchuck to navigate the poor creatures through a series of treacherous skies. The Hookarium is perhaps the weakest of the game modes, presenting what is essentially a fishing game. Here, Rabbids are attached to rods and must be flung out into different environments to collect certain objects. The Wii remote is used to cast and determine direction, and the Nunchuck to reel the lagomorph in. It’s a constant struggle to actually get the Rabbid to go where you want him to, however, despite the game’s Motion Plus support; a similar issue blights the Flyarium games. These activities aren’t broken, but they’re certainly not as much fun as everything else.

The hub itself is brimming with activities too. There’s a juggling game, golden pocket watches to collect, and even a fully-functioning Just Dance clone. Even if you’re killing time in the museum waiting for a friend, you’re never at a loss of things to do. Still, if all you want to do is jump into some multiplayer shenanigans with a chum, holding the up button will take you to a more traditional menu screen, where each of the activities in the game can be loaded without having to find it first in the museum.

Each activity is preceded by a comical cutscene which follows the Rabbids as their time-travelling washing machine appears in key moments throughout history. One sees the extraordinary appliance distracting the captain of the Titanic, who proceeds to crash the steamship into the fateful iceberg. Another sees the alien bunnies off-setting the course of Apollo 11, a virtual Neil Armstrong uttering the immortal words “One small step for man…”, before discovering that the door of his spacecraft is blocked by a large rock, trapping him inside. There’s rarely much dialogue, but each of the short scenes does a great job of contextualising the mini-games, conveying much of the title’s humour in the process.

Perhaps the most entertaining thing about the game is the hilarious “Bwaaaaaaaaaaaah” that accompanies each press of the down button on the Wii remote. Watching a Rabbid belt out his catchphrase is just as funny as hearing it; his whole body shaking and gaping mouth revealing two solitary teeth. Each player has a different pitched ‘bwaaah’, and this quickly turns four-player games into a cacophony of nonsensical noise. There’s even a mini-game in the museum that allows up everyone to sing in a Guitar Hero-esque mini-game, where you have to ‘bwaaaah’ in time to notes that scroll across a stave. It’s as hilarious as it sounds, and equally as fun as any of the ‘proper’ activities in the game.

Raving Rabbids: Travel in Time is far more than a hastily cobbled-together ensemble of mini-games. It’s a cohesive party experience with a plethora of activities tied together in a fantastic hub world. While there’s not a whole lot of depth to it, it does what it does very well. The game has provided immeasurable entertainment in the office during the review process, which is a good sign indeed. If a room full of hard-nosed journalists can find enjoyment from Rabbids, toilets and stupid noises, it bodes incredibly well for everybody else. If you asked me right now to recommend one party game to play with friends and family over Christmas, I wouldn’t hesitate in saying this.

Travel in Time is far more than a hastily cobbled-together ensemble of mini-games. It's a cohesive party experience with a plethora of activities tied together in a fantastic hub world.
8 Lots to see and do Decent variation to game modes Great sense of humour Hookarium isn't particularly fun