In Tom Clancy’s Rainbow Six Extraction, the new first-person shooter from developer Ubisoft Montreal, aliens arrive on Earth. And I wonder what the writer of such brooding, brick-thick volumes as Patriot Games and Clear and Present Danger would make of them. They are slimy, impolite, and encrusted with black sludge that likes to creep outwards, spreading across floors and walls like writhing, high-speed rust. They are called the Archæans, and let us note the rather nifty ligature, fusing the “a” and the “e,” in their name. Thus, our glistening destruction arrives with a Latin twist, and our planet will presumably be split open like an infinitive.

Quite how Clancy, who died in 2013, would feel about his name being assigned to Rainbow Six Extraction, I don’t know. Certainly he, of all people, understood the sales-spiking power of a name; it was Ronald Reagan, after all, who described Clancy’s first novel, The Hunt for Red October, as “the perfect yarn,” and in so doing barged it to the top of the New York Times best-seller list. (Of Reagan’s endorsement, Clancy remarked, “I was thunderstruck, dumbfounded, bowled over, amazed. But I wasn’t surprised.”) Even so, isn’t an alien invasion going slightly too far?

The games to which the writer’s name has been appended have always taken liberties (no laughing matter, in Clancyland), but their worlds are often steeped in the Clancy Look. The terrain through which Sam Fisher skulks, in Splinter Cell, is bathed in shadow and harks to the beep of high-tech gadgetry. As for the new game’s immediate predecessor, Rainbow Six Siege, in which players must tactically breach and clear rooms of terrorists, much of its frenetic action was prefigured in the novel, Rainbow Six, published in 1998. “What’s the plan if the opposition just starts shooting out of hand?” one soldier, Eddie Price, asks. To which his comrade, Ding Chavez, replies, “Two flashbangs at the front door, four more inside, and we blow in like a tornado.” Such was the brief followed by Ubisoft Montreal, much to the satisfaction of the game’s bustling fanbase. I can’t imagine what Ding would make of this extra-terrestrial menace, which is surely way beyond the sum of all fears.

Still, more than any other studio, Ubisoft is willing to mutate its existing IPs until they scarcely resemble what they once were. First glimpsing the Archæans—back in 2019, when the game, then dubbed “Rainbow Six Quarantine,” was revealed at E3—I may well have been thunderstruck, dumbfounded, bowled over, and amazed. But I wasn’t surprised. The problem with Rainbow Six Extraction, however, is not that we are without a brief—that there is nothing in the novels, no matter how alien the prose, from which to draw—but that, as Eddie Price anticipated, the opposition often just starts shooting out of hand. For a tactical shooter, there isn’t exactly a richesse of tactics on offer.

You begin each map with three objectives, the likes of which we have seen many times over—plant a bomb, defend a hotspot, and so forth. (Special note should be made of the scientists in need of rescue, who sit on the floor like children, weeping into their hazmat suits, and must be led away by the hand and tucked lovingly into an escape pod; the elite operators of Team Rainbow are doubtless trained in the art of delivering bedtime stories in high-stress situations, but Extraction doesn’t go there.) You are free to evacuate at any time, which means that staying, in an attempt to complete further objectives—and to net more XP, accordingly—is an enticing risk. If you die, the operator you were using is engulfed in emergency protective foam, which froths and thickens over their person, as though the boffins in R. & D. were inspired by staring down into their cappuccinos. They can then be rescued in subsequent excursions, to salvage the XP cocooned with them.

Often, you start stealthily, knife drawn, eyes fixed on the back-and-forth plodding of your foe; but performing silent takedowns on your enemies, with their blockish animations and bloodless lack of texture, is hardly a thrilling evening in—even with friends. The A.I. that governs the Archæans isn’t up to much; their approach entails bounding toward you, emitting a whoop, like a collapsing airbag, and beating you with their club-like forearms. You wonder how so brutish a race of lumberers managed to leap across the interstellar void. (If you are willing to do a little archæology—taking samples, scanning evidence—you will find that they originated from a parasite, likely thumbing a ride on a passing meteor.) There are also scuttling variants, bearing egg sacs filled with gooey grenades, and another biped which hurls bolts of blue energy from its hands. 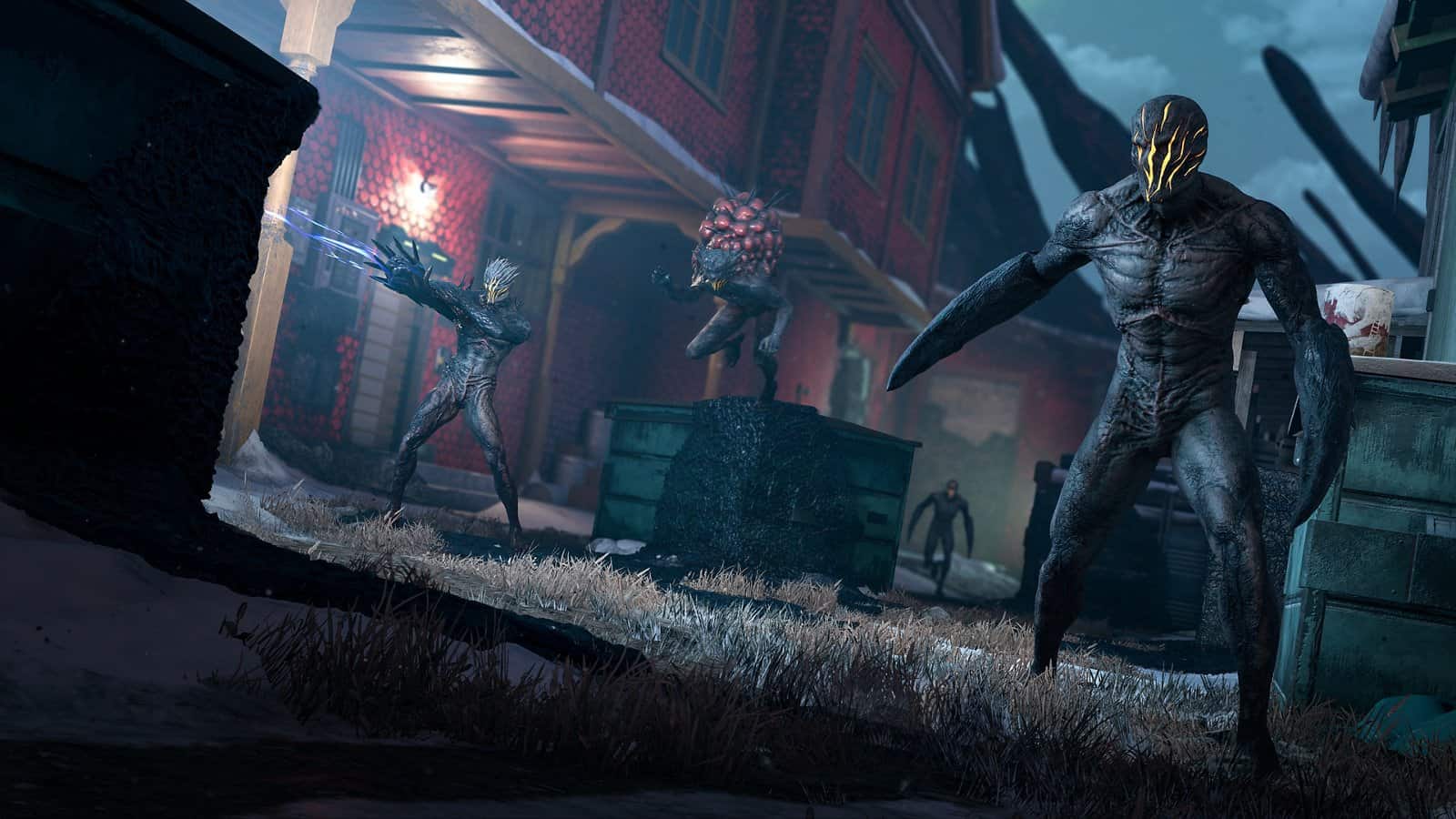 One thing that would help Rainbow Six Extraction is a concentrated dose of fright. If we are going to pit NATO’s top guys against monsters from beyond the stars, is there not an inherent opportunity for horror in such a clash? None of the creature designs are remotely scary; they don’t lodge in the memory in the way that, say, those of H.R. Giger did—namely, because so many of his designs were infused with ideas of violent lodging. They aren’t even on a par with the pestilent Locust, from Gears of War, who resembled scaly boulders crossed with vampire bats. Nor, to be honest, am I quite sure how the Archæans fit together: Are they copies of us? Do the two-footed blunderers keep the four-legged fellows as pets? What do they want? What are their voting intentions? There is plenty of present danger, but none of it is clear.

The best way to play is with a couple of friends and, ideally, a crate of icy beer. I powered through most of Rainbow Six Extraction with a shotgun, relishing the crunch and spray of the wooden surfaces. (The game runs in the Ubisoft Anvil engine, and uses the same impressive damage effects from Siege.) You venture between abandoned bases in New York, San Francisco, Alaska, and a small town in New Mexico; each comprises three levels, which are draped in yellow tarpaulin and drained of human trace. They bring to mind the opening mission of Hitman, in which Agent 47 undergoes training in a disused missile solo, replete with plywood sets—as good a way as any, I guess, to launch a career in murder. Given that Extraction opens with shots of the Statue of Liberty, as it is bound in dark tendrils and beheaded, I was sure we were in for a rousing American spectacle—a Patriot Game!—but what we get is a thin-skinned map pack, and no sense of what we are battling to save. That, in a way, is true to Clancy: to the feeling that his heroes, for all their brightness, elite training, and clean-cut brilliance, are fighting for a place that doesn’t truly deserve them. It deserves the Archæans.

More than any other studio, Ubisoft is willing to mutate its existing IPs until they scarcely resemble what they once were.
5 Damage modelling Archæans