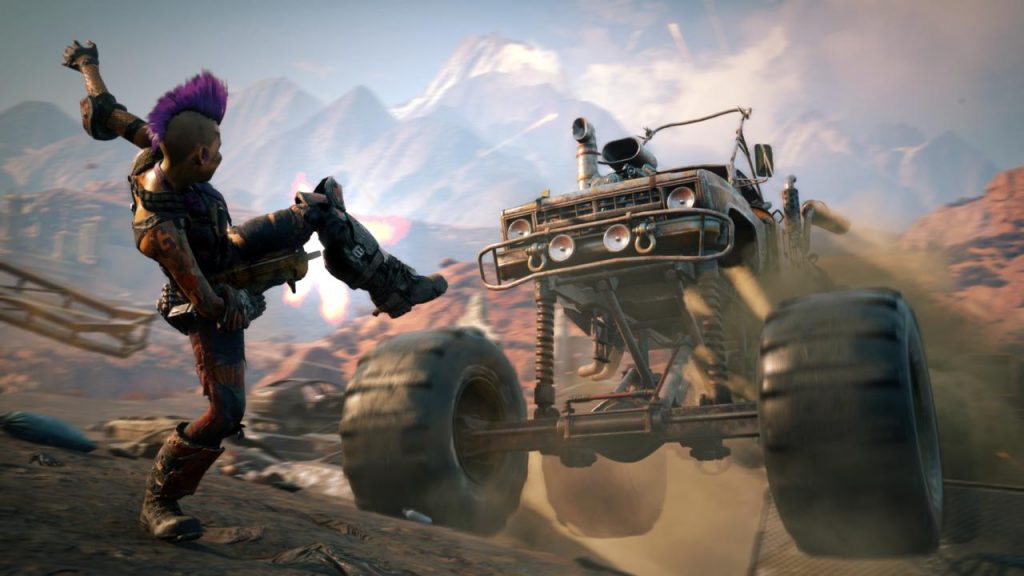 Rage 2 is set in the future. The Earth looks like it’s been licked by a solar flare. Here and there, scraps of old civilisation jut from its parched planes. Clans of survivors tussle over resources, and new settlements spring up – hardly civilised – from the dust. Into this landscape strolls Ranger Walker, one of a faction of fighters that defend the wastes from the military grip of the Authority – a gloomy sector lead by General Cross, who resembles a grown-up version of the Spider Baby, from Toy Story. After a siege lays waste to Walker’s allies, he (or she, you can choose) dons a suit of souped-up armour and goes out scavenging for revenge.

The game has been jointly made by two developers, and you can see the joins. The open world turf has been laid by Avalanche Studios, who made the Just Cause games and Mad Max, and it stands somewhere between the two: the rocks and wreckage of Max’s world, tinged with the summery greens of Rico’s. The weapons, meanwhile have been provided by id, and, as such, they feel like cars – all crunch and throttle, with barrels like fiery exhaust pipes. Is there any other company that does shooting as satisfying as id does? Staying true to its name, the studio has the knack of tapping into our lizard-brained desire for death, giving its guns the weight and power of our darkest impulses.

Thus, every wire of the game’s circuitry is routed back into the combat. On top of traditional guns, you have superpowers – called Nanotrites – which inject some creative cruelty into things. You can dash around at the speed of a blink; slam the ground like a meteor, sending your foes skywards; toss a vortex at them, wrenching them inwards and hurling them out; and deploy a pop-up energy shield, ideal for withstanding an onslaught in style. The menus, of which there is a muddled multitude, are initially confusing; if you find yourself squinting at them as you would an overgrown design document, it’s because that’s what they are. I soon learned to pop in, beef myself up at random, and dive back into battle. 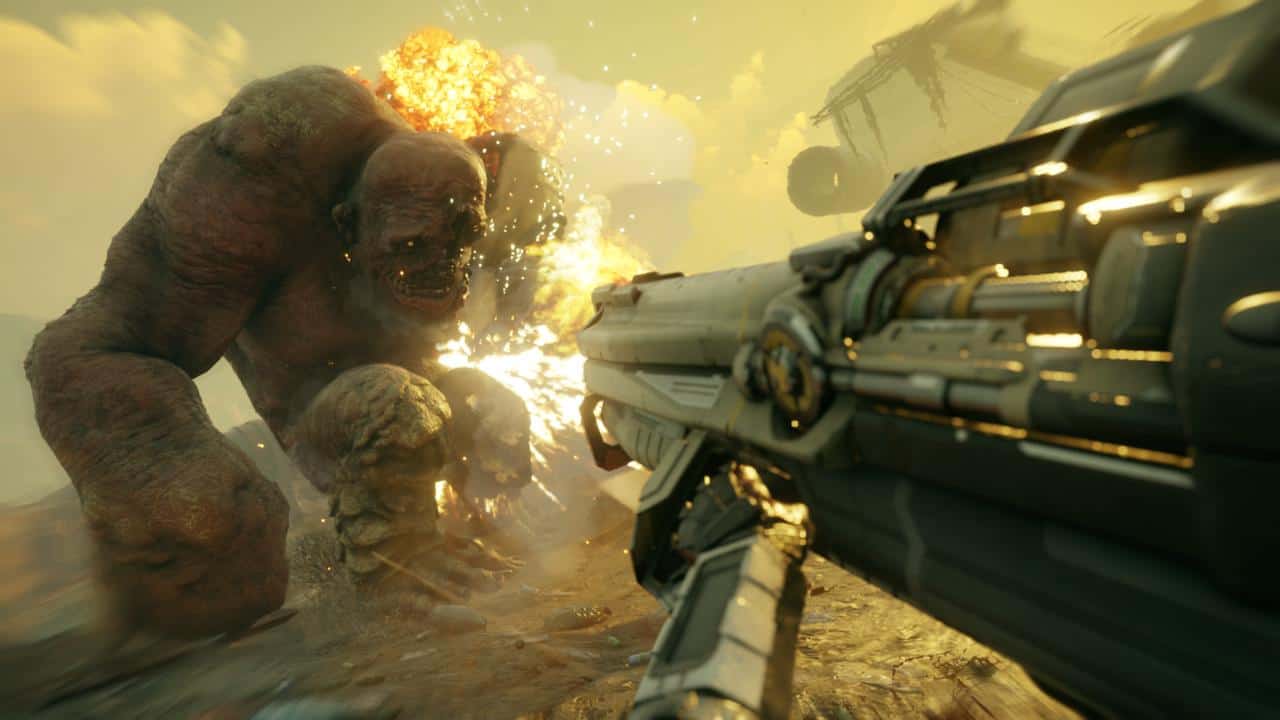 Indeed, the game itself is best treated in similar fashion. Its every moment is a vertical slice, to be bitten off and chewed before gorging onwards. The gunfights aren’t as challenging as those in Doom, id Software’s last shooter. That game checked you with tactics, and your strategy morphed on the fly as enemies poured forth, turning each chamber into an enflamed puzzle. Here, most things you do will kill most things you see, but you’re nudged toward variety by the cooldowns – each of your powers needs to recharge after use, so you summon up the next one in order to stay hot. When you’ve exhausted your nanotrites, you have your Wingstick (a decapitating boomerang), an auto turret (floating machine gun), and a clutch of cookable grenades.

Avalanche steps in to offer up some checklist diversions – more variations on a theme, really. There are roadblocks and enemy bases to clear. Fallen meteorites filled with crystalline goodies, guarded by goons. Arks, which bestow your Nanotrite powers, patrolled by more heavies. Convoys to explode with your gun-mounted car. Enormous mutants to fell. A race track derby. And then there’s the Icarus, a handy hoverbike with which to explore the map at a breezy height. Most of my time between sprees of bloodshed was spent buzzing up above the fracas, a welcome breather. Such fine, fierce action calls for a cooldown of its own. But it’s never long before you’re lured back down, and I was often hungry for it. There must be something in the air.

If there is, it’s conjured by Avalanche’s artists. The game’s colours are fermented in a sour smog of orange and yellow, streaked with sickly pink – it’s acidic, as if tempers here don’t flare up so much as keep a constant burn. And yet, the last thing you’ll find in Rage 2 is anger – or any other emotion, for that matter. The entire thing is coated in a rainfast lacquer, locking in any human feeling, lest it run like paint. At one point, when Walker’s mentor is killed, he receives a holographic communiqué from her and says, to her daughter, ‘Yeah, your mother is no-nonsense even from the afterlife.’ ‘Too soon, Walker,’ she says, before he replies, ‘Sorry Lily… But hey, I’m ready to trek out into the Wasteland.’ Oh, well thank goodness for that. Consider her consoled. 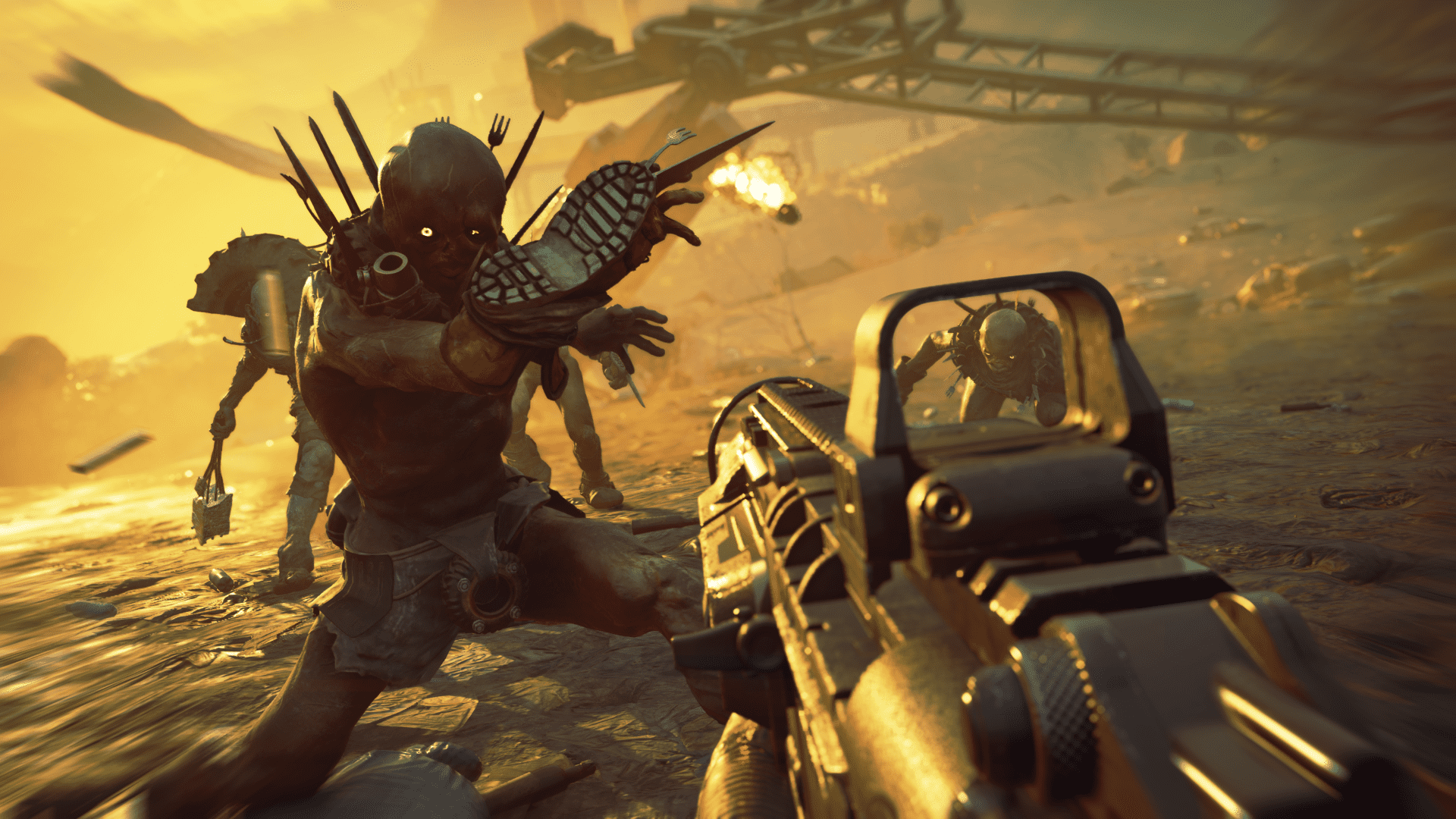 Elsewhere, there’s a strange tone to the game; it doesn’t seem a story of revenge so much as a lark. The problem is that Walker is a talker. ‘Let me guess, I can find that in a heavily fortified base, chock full of crazed murderers – oh, and only I can pull it off,’ he says, mocking the game he’s in before concluding, ‘I’m just seeing a pattern.’ Those self-referential gags worked a lot better in Doom. Think of the nameless, silent marine at its heart, whose gestures spoke volumes; impatiently attuned to the conceit of his mission, he would punch through computer monitors that delivered exposition, eager to accelerate into the fray. The humour was desert-dry and fleeting; here, it’s all talked out, the irony ironed flat into glibness.

Still, I can’t imagine anyone coming to Rage 2 in need of life-affirming wit or hilarity; it’s a game – and one I would heartily recommend – about blood and bullets and pillars of fire. It’s fun; it’s supposed to be fun. Even though you can gaze through its twisted mayhem to its formulaic open world design and think to yourself, ‘I’m just seeing a pattern,’ I’d suggest not thinking about it too hard and, instead, try shooting something in the head. With a brief narrative, the game doesn’t outstay its welcome, and it goes out with sufficient bang. The final mission has you breaching a heavily fortified base, chock full of crazed murderers. Only you can pull it off. It’s great.

Available on: PlayStation 4 [reviewed on] Xbox One, PC