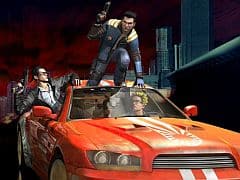 Is it me or is the PSP getting a whole lot more interesting now, some two years after it was originally released by Sony? I have to admit to not being a massive fan of the handheld in its early days. I felt the quality of its games, which for me is the most important thing, was substandard. Bar a few exceptions most of its titles felt like simple ports of PS2 games that didn’t suit the portable gaming format nor did justice to their original source. But, just as it seems the PSP’s big brother the PS3 is finally finding its feet with some quality titles like Ratchet and Clank: Tools of Destruction and Uncharted: Drake’s Fortune, the PSP is becoming a much more attractive proposition with games like Final Fantasy Tactics: The War of the Lions and Syphon Filter: Logan’s Shadow. And Pursuit Force: Extreme Justice, the follow up to the 2006 original, is further evidence of this trend.

PF: EJ revives memories of classic arcade racer Chase H.Q. You’ll see high-speed highway pursuits with bad boy vehicles as you attempt to bring those crooks to book with well aimed rams and handgun fire. But there’s so much more to it than that. As you put your foot down and edge closer to the bad guys you’ll be able to fling yourself from your car onto the target vehicle, landing on the bonnet, the roof or clinging on to the back like Marty McFly on steroids. From there you can pump lead into the driver and his cronies, and press Square to get behind cover when it’s needed. It’s a thrilling experience, it never gets boring no matter how many times you do it and it’s wonderfully realized on the PSP’s cinematic high-quality widescreen. Even better, if you’ve maxed out your Justice bar, built up by killing gang members and ramming vehicles, you’ll slow time down Matrix style, allowing you to blast your enemies as you twist and curl mid air from car to car. Just… savage.

Then you have the rail gun/sniping sections, which are solid, sound fun. Whether it’s a sniping mission that sees you trying to protect your team mates as they infiltrate a heavily fortified base, or it’s decimating enemy vehicles with a rail gun from within a helicopter, the frequent change up in game styles, often mid-mission, really helps to keep you interested, and in some parts of the game can feel spectacular.

If I’m going to criticise one thing it’s the on-foot sections, which, while an extremely decent effort, don’t feel as good or as fun as the rest of the game. Here you have a third-person perspective, with movement and the camera all controlled by the PSP’s analogue nub. As with many PSP games that feature this type of gameplay it feels clumsy, awkward and at worst frustrating. Moving the targeting reticule accurately can be extremely difficult, and without a proper cover system (you can use the d-pad to strafe left and right while aiming), there’s little more to it than simply blasting your way in and hoping for the best. But I can forgive this failing because, while it sticks out like a sore thumb compared to the other gameplay types in the game, it’s about on par for most third-person shooting efforts on the PSP.

This is the great thing about PF:EJ. One second you’ll be speeding after an enemy convoy, jumping from vehicle to vehicle as you desperately try and take the boss down before he reaches his base, the next you’ll be picked up by a mate in a chopper and asked to provide covering fire with a sniper rifle. Us game hacks say things like “thrill a minute” and “adrenaline pumping” probably too much, but in this case it’s absolutely justified.

What am I most impressed by? How solid the driving is. The way cars feel to drive, the sense of speed and urgency, the sound they make, the great graphics. Whether it’s the sirens wailing on your Pursuit Force car or a Mad Max-style drag complete with dead goon flopping about a turret fixed to the back – it all feels just right. Add to this the lens flare, no pop-up, the impressively varied scenery and wonderfully detailed and varied vehicles and you’ve got something that feels like one of the best racers around. If I can liken it to anything, it’s like giving the cars from Burnout a lick of action paint.

PF: EJ is also a better Fantastic Four game than any of the dire movie-licensed games pumped out since the films release. The story, while overrun with cliché, hammy dialogue and predictable plot, is a perfect fit for the game. The main single-player campaign, which will take you at least five hours of solid play to work your way through, features some eye-catching characters. From the ridiculously throaty Pursuit Force chief, complete with classic “I don’t pay you to die” quotes when you, erm, die, to the tough-talking token rude boy who specializes in close-quarters combat, everything in the game makes sense. It’s silly, yes, but it’s silly fun.

And when you’re done with the single-player campaign you can turn your headlights towards the four-player wireless multiplayer mode or try to unlock the added content by replaying story mode cases in the Bounty Mode and earning stars. You can then spend these stars in the shop, buying movies, cheats and tonnes of other cars and bad guys from the game’s five gangs.

Pursuit Force: Extreme Justice is one of the best PSP games I’ve played. It’s not trying to be an epic action shooter, nor is it a simple arcade racer. It’s a mish-mash of all of these things, and more. Get into gear, and get this game.

Pursuit Force: Extreme Justice is one of the best PSP games I've played. Get into gear, and get this game.
9 Great graphics Great driving Thrills and spills gameplay Boring on-foot sections