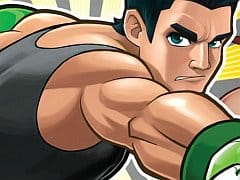 Modern games let us do pretty much everything we can imagine, with complex control schemes often requiring an encyclopaedic knowledge of the manual before you can even get started; extended tutorials designed to ease you in to the action are forced on you before you’re allowed to play the game you just spent a good wad of cash on. If you’re not struggling to grasp the various button combinations you’re probably jumping up and down trying to get fit, or waving your arms about trying to throw a virtual ball at a virtual coconut. Gaming has changed, and for many people, not for the better. Punch-Out!! is a very obvious attempt to bring back a game from our youth, but do we really want 80’s gameplay with modern presentation?

The answer to this will almost entirely depend on if you played and enjoyed the original NES game or its SNES follow-up. With your character Little Mac taking up position at the bottom of the screen and able to jab and hook with each hand and throw a star punch this really is what you’ll remember. The formula is the same too, with a series of increasingly tough boxers to face, each with their own set of attack patterns and weaknesses. Depth here doesn’t come from your move set, but with the correct use of each punch and knowing when to dodge and block.

If you’re thinking this all sounds a bit simple and nothing compared to the likes of EA’s Fight Night series, you’d be partially right. This isn’t a boxing sim, instead putting the focus on learning patterns and knowing when to unleash a counter punch. Early on you’ll blast through the opposition without much trouble; punching opportunities come thick and fast, and attack patterns are easy to work out and spot. A quick dodge left, right or back, or a raised guard combined with a follow-up flurry of punches will result in your opponent eating mat before too long.

As you move beyond the easy opening fights and up to another level the difficulty spikes quite significantly. Openings aren’t so obvious, attacks come in seemingly unavoidable flurries and you’ll be KO’d before you have time to blink. Frustration rears its ugly head from time to time, and you’ll likely experience moments where the Wii Remote is nearly flung with some venom into the nearest wall, but the game is fair. Some practice in exhibition mode to learn the required defensive and offensive strategies against a troublesome opponent will give you a much better shot at progressing – once you know the trick to each fight victory is often so easy you’ll wonder how you failed so badly before.

Getting past each opponent brings a sense of achievement that the best 80’s and 90’s arcade games dished out in exchange for some small change, and there really hasn’t been much on the Wii that offers this old-school experience. Some players won’t want this though, coming to the game having grown up with more serious fighting games and boxing sims. One of the big problems for this group is the lack of control you have over Little Mac. Other than dodges he’s rooted to the spot. This is in keeping with the original games, but for many it’ll feel far too restrictive.

Punch variety is also painfully limited. Learning how to achieve star punches against each boxer requires practice, but tactical fighting is more or less non-existent. This shows itself quite clearly in the two-player split-screen mode, which pales in comparison to playing alone against AI. Without the attack patterns and counter opportunities to work out, fights against fellow players feel basic and rather flat. If you’re after a fun two-player boxing game Wii Sports Boxing is still your best option. Punch-Out!! is most definitely primarily a single-player game, so if you think you’re going to tire of the trial and error fights, think again about picking this up.

The classic control method, which uses just a horizontal Wii Remote, will probably be the favourite option for long-time Punch-Out fans. This maps punches to 1 and 2, star punches to A and dodges and block to the d-pad. – pressing up on the d-pad while punching performs jabs. Alternatively you can use the Wii Remote and Nunchuck to throw gesture punches, or even use the Wii Balance Board to dodge. This more Wii-centric control system works fine, and will be ideal for gamers groomed on the Wii, but the classic option provides tighter, more responsive controls that will be the only option for hardcore gamers.

While the gameplay hasn’t really changed the presentation has been spruced up while retaining the feel of the originals. Boxers are now 3D, but the cel-shaded exaggerated designs mean fans will feel right at home. Newcomers will appreciate the character that’s been pumped into each fighter, despite some fairly obvious cultural stereotypes, and the audio is suitably upbeat throughout. It’s a slight shame that developer Next Level only opted to create one new boxer, with 12 of the 13 being found in the original two games. A few more new faces would have added a greater sense of discovery, but hardcore fans will be pleased that the old favourites have returned.

If you’ve been waiting most of your life for a visually upgraded Punch-Out!! that plays just as you remember it from the NES and SNES, your dreams have been answered. This is exactly that, and packed full of the kind of charm you’d expect from a Nintendo product. If you like your sports games to be faithful to the real-life experience Punch-Out!! may well leave you quite cold and wondering what the fuss is about. Punch-Out!! on Wii has been made almost exclusively for gamers who long for the glory days before Nintendo was most well known for Wii Fit. In that sense it can be classed as a job well done.

If you've been waiting most of your life for a visually upgraded Punch-Out!! that plays just as you remember it from the NES and SNES, your dreams have been answered. This is exactly that.
8 Loads of character Classic gameplay on a new console Not enough new characters Multiplayer isn't great