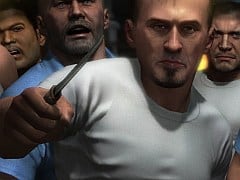 It’s somewhat odd that a Prison Break game has been released in 2010, a year after it disappeared from our TV screens, and a long time after it was at the peak of its popularity, but here it is. With most of the cast from the hit series lending their voices and appearance to the game, and a story that runs through the show’s first and best season, there were signs this might be something to get a little excited about. Perhaps, like Sony’s decent PS2 24 game, this would at least deliver some simple fun. But no. Prison Break: The Conspiracy is an utterly terrible video game. Early on you’re asked if you want to do your time the hard or the easy way. Presumably both terms are prison code for boring and tedious.

If you’re not familiar with the TV series, it was a fairly simple set up. Wide-shouldered hard man Lincoln Burrows is set up for the murder of the vice President’s brother by a shady organisation known as The Company. He’s sent to the high security (although you wouldn’t think it) Fox River Penitentiary to serve time before facing the electric chair. Not good news for him, but luckily his genius brother, Michael Scofield, stole the blueprints and conjures up a way to break Linc out. This involves him getting sent down, then using an elaborate tattoo to break free. It’s all a bit crazy.

The game, bizarrely, casts you as complete unknown, Tom Paxton, an agent for The Company, who has been sent in undercover to guarantee Burrows gets the electric chair and to make sure the brothers aren’t up to no good – which they are. Fans of the show will baulk at the introduction of a character who wasn’t seen in the show, and wonder why they aren’t just playing as Scofield or Burrows, or any of the other friends they make while on the inside. Most of the main characters feature, although some only make cameo appearances and there are a few notable omissions. Sexy prison doctor Sarah is absent, Charles Westmoreland looks nothing like his character, and series highlight T-Bag has very little screen time – which is a shame as he’s clearly the most interesting inmate.

As you might have expected, gameplay is a mix of hand-to-hand combat and stealth, although neither of these aspects are handled well and it’s tied together with some terribly tedious fetch missions. The game essentially boils down to sneaking into somewhere to get something for someone and the odd fight, repeated over and over again. The stealth mechanics are basic at best, with none of the sophistication seen in the likes of Metal Gear Solid or Splinter Cell. You can hide in closets, behind objects and various other things, but it feels like developer Zootfly (yes, the team that made the Ghostbusters tech demo that caused a stir a few years back) has ignored every stealth game ever made.

To be fair, the stealth play is workable, but it’s clumsy, clunky and all too predictable. You never feel like you’re doing anything smart, but instead simply using the tools handed to you on a plate. At certain points you can detune a radio to distract guards or tamper with a fuse box to turn out the lights, but these are entirely contrived situations in which you have no other choice but to perform those actions. It’s all so dull. Get spotted during one of your dangerous stealth missions and it’s game over. You can thankfully go back to a checkpoint instantly, but you never get the option to get yourself out of trouble.

Combat is equally poor, with only a quick punch, hard punch, block and dash at your disposal. The idea is that you block attacks and then counter, but with so few options it feels like it was put together in an afternoon. Within the first hour of the story you’re introduced to the physical training activities (punching bag and weight lifting), but these simply increase your speed and strength, rather than opening up new moves. You can use your limited fighting skills to brawl for cash, but doing so is largely pointless as the money can only be used to buy new tattoos.

So does Prison Break have any redeeming features? Well, the main characters are modelled well enough, and are easily recognisable, but they look awfully mannequin-like and animate as if from the PS2 era. It’s nice to hear the proper actors voice their parts, but the delivery could certainly have been better, and the show’s music can only give the game so much credibility. The developer even included those frenzied edits of moving through underground tunnels, which split up scenes in the show, but it’s not enough. Prison Break is a passable looking game, but lacking so much of what we expect in this day and age.

I’m not a fan of the Prison Break video game and it’s hard to believe anyone could be. Licensed games can get away with a lot, but this doesn’t even reach mediocre quality, with its core mechanics becoming woefully boring a fraction into the campaign. Without any gloss to paint over the rough stealth gameplay, there’s really nothing here to recommend. Avoid like it’s the soap dropped in the communal shower.

Without any gloss to paint over the rough stealth gameplay, there's really nothing here to recommend. Avoid like it's the soap dropped in the communal shower.
4 Characters are recognisable Tedious fetch missions Stealth and combat are poor Not enough T-Bag

Video game based on the hit TV show.

Video game based on the hit TV show.