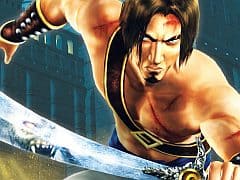 Even after seven years, running along walls has lost none of its charm. Nor has leaping from rooftops, swinging from poles, or – best of all – rewinding time when it all goes pear-shaped. The mechanics that defined the Sands of Time trilogy have, rather fittingly, stood the test of time incredibly well. If you never experienced the joys of Ubisoft Montreal’s classic action adventure series back in the day, now’s the perfect time to do so.

For £29.99, or £24.99 if you shop around, you’ll get all three games in the original trilogy: The Sands of Time, Warrior Within and The Two Thrones. I mention price because these are old games, and value plays an important part in passing judgement on the collection fairly. For less than a tenner a game, you’ll get 720p HD visuals, updated textures, normal maps and anti-aliasing, which – for those that aren’t versed in geek-speak – makes the games much easier on the eyes than the original PS2 versions. There were comments floating about the office that this trilogy doesn’t look as good as the HD God of War collection, but I feel this is unfair; GoW was a better-looking game to begin with. Your money also gets you stereoscopic 3D support, which will come as good news indeed for those of you lucky enough to own 3D TVs. All things considered, this collection is a bit of a bargain.

The first game in the trilogy is still the best, creating an atmosphere that its sequels failed to replicate. Sands of Time strikes a perfect balance between platforming and combat, with enough plot and character progression in between to stitch it all together. After looting a Maharajah’s castle the Prince happens upon an ancient dagger, while his father bags himself a rather nice hourglass. Realising the power these artefacts hold, an evil vizier tricks the prince into plunging the dagger into the hourglass, which releases the titular sands of time. A sandstorm whips up out of nowhere, engulfing the city and turning its denizens into hideous monsters. Being the righteous sort of chap that he is, the Prince embarks on a journey to put everything right.

The dagger causing all the trouble is far more than just a plot device, though. Remember falling into a pit of spikes in Tomb Raider? With Lara’s harrowing screams combining with your own at the thought of having to replay the last ten minutes? That kind of thing rarely happens in Prince of Persia, thanks to an ingenious get-out-of-jail-free card. The Dagger of Time permits a mechanic that changed the platform genre in a fundamental way. Pressing L1 at any point will rewind time, lifting your limp body off a bed of spikes and launching it up into the air where it’ll land safely back on its feet on the platform you leapt from 5 seconds earlier. You can’t use this power willy-nilly, however, otherwise the game would cease to be challenging. You’ll start the game with three gourds of sand, each allowing about seven seconds or so of rewind time; empty gourds can be replenished with pickups throughout each level, as you progress through the game you’ll gather additional jars, increasing your capacity for life-saving rewinds. This time-bending mechanic is at the heart of the experience, and runs through each game in the series.

Like a teenager trying to break free from the shackles of conformity, the Prince went all emo for the second instalment in the trilogy. Warrior Within was all about eye-liner, scars and distorted guitars. The opening scene is a blur of blood, boobs, and butt cheeks, distasteful additions to a series that was once calm and classy. I was much younger when I first played Warrior Within; seething with testosterone and welcoming of all the smut I could get. I certainly had no qualms about being exposed to a bit of cleavage, which meant I was completely blind to the problems critics had with the game. Six years later, though, I can totally see the shortcomings. It’s brash and unnecessarily angry, forgetting everything that made Sands of Time so charming. In short, it lacks subtlety.

Ignoring the attitude and questionable art direction, Warrior Within is of a similar high standard to the first game. A heavier emphasis on combat detracts from the platforming slightly, but everything that made the first such a hit is still in place. Improvements to combat mean the Prince can now wield two weapons at the same time. His repertoire of moves has been greatly expanded too, with numerous gory finishers to compliment his thematic ‘Warrior Within’. It’s not a bad game by any stretch of the imagination, just one that tried too hard to conform to what the developers thought was cool at the time.

The Two Thrones is a return to form. This was the only game of the three I hadn’t played prior to this review, and I revelled in the opportunity to play it for the first time in HD. The third entry in the series sees the Prince return to his home-town of Babylon, the place where he was born and raised. Sailing into its harbour at the start of the game, he’s shocked to discover the city in flames. The game follows the Prince as he leaps about the war-torn city, spurred on by a plot to rescue a woman named Kaileena (who also featured prominently in Warrior Within).

The Two Thrones builds on everything achieved in the first two games with the introduction of a fairly fundamental twist on the formula. After being infected with the Sands of Time, the hero’s body is taken hostage by an evil alter-ego; the Dark Prince. Under stress or emotional strain, this manifests itself and transforms the protagonist into a tall, dark-skinned warrior. It wields a chain-whip known as the Daggertail, which comes with it’s own unique move set and strangulation stealth kill. The mysterious interloper also talks to the Prince as he shimmies about the city; a disembodied voice that undermines his decisions and tries to corrupt his heroic nature. Although grim and ever so slightly sadistic, the character brings some welcome humour to the game, adding a comical background narration to the gameplay.

As with the first game, the platforming is the real star here, and several new mechanics are introduced. The Prince can launch himself off window shutters, flying at 45 degree angles through his environment. He can also slide down chutes and walk along balance beams, as well as everything else he could do in previous games. The Dark Prince brings something to the platform table, too, using his Daggertail to swing off chandeliers, doubling the length of a standard wall run.

The Two Thrones walks a line somewhere in between Sands of Time and Warrior Within. It’s certainly more violent than the original game, with gruesome execution animations and some fearsome-looking bosses, but it’s portrayed with a maturity that was lacking from its predecessor. For better or worse, it’s also a much more diverse experience than the previous two, with chariot racing, stealth sections and set-piece battles against huge enemies. It’s far more epic in nature, offering an experience far more like God of War, albeit a rather platform heavy take on it.

There’s a solid thirty hours of gameplay spread across the three titles, with a quality of platforming that refuses to drop throughout. There’s so much more to getting from A to B than there is with most platform games this generation, which have turned acrobatic traversal into a mindless case of mashing on the X button. In many ways, Sands of Time is the pinnacle of 3D platforming, with a quality of level design and fluidity of controls that has yet to be bettered. If you’ve never played the PS2 Prince of Persia trilogy before, this is the perfect opportunity to do so. If you have, play it again; reliving the experience in HD is a glorious reminder of just what great games these are.

If you've never played the PS2 Prince of Persia trilogy before, this is the perfect opportunity to do so. If you have, play it again.
9 An absolute bargain Fantastic music throughout Platforming still shines The tone of Warrior Within still grates