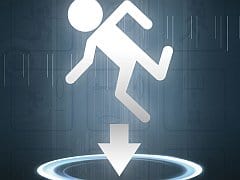 Finally, you can now download Portal to your Xbox 360. It seems ridiculous that 360 owners have had to wait a year to do so, forced (well, you should have wanted to, really) into buying Valve’s brilliant The Orange Box compilation just to get a taste of one of 2007’s best games. But there you go. That’s capitalism for you… or something.

In the unlikely event that you have absolutely no idea what all the fuss, or indeed Portal itself, is about, allow us to bring you back up to speed. You wake up in a room without knowing why you’re there – white walls, transparent doors, all very sci-fi – like cult horror film The Cube spliced with the video for Björk’s All is Full of Love. A computerised female voice, one that you’ll never forget, barks from some unknown origin, guiding you through the Aperture Science Laboratories test program. A portal appears, you walk through, but wait, something’s up – you can see yourself entering it – or is that exiting it? Welcome to the mind-bending world of Portal.

You soon pick up the Aperture Science Handheld Portal Device, an instant addition to Half Life 2’s Gravity Gun and Doom’s BFG in that illustrious list of greatest game guns ever. From a first-person perspective you use it to create two portals – one to enter, one to exit, one orange, one blue – on walls, ceilings, the floor, whatever, as you work your way through to the exit of each of the game’s puzzle-tastic levels. Expect some of the most intense and masochistic level design you’ve ever seen, each more twisted and sick-inducing than the last. Portal is certainly not for the weak of stomach.

Portal works so well it’s unreal. The game subtlety introduces you to its mechanics with a learning curve that’s just right. You never feel so clueless that you feel like turning the game off. And yet the rooms never present too easy a challenge that you lose interest. Things start off quite simply – with energy balls bouncing off walls, cubes that need to be placed on button sensors to open doors and hard to reach switches that need to be flipped. But just wait till you get about halfway through the game – you’ll be creating portals while flying through the air slingshot style, using gravity’s momentum to propel you to ledges away in the distance, and dropping chairs on turrets that have some of the creepiest voice acting we’ve ever heard. It’s all about forethought, timing and execution as things get more and more precarious. You’ll even need to employ quick thinking and improvisation as threats present themselves without warning – and display a calm head as gravity automatically rights your point of view as you fly through portals placed on ceilings and walls.

An important thing to mention about Portal is that despite it being a single-player puzzler, it works wonderfully well with a friend or two watching, helping you work your way through to the main game’s climactic end (no spoilers, but there will be cake). My flatmate and I started Portal about midnight and we both had a surprising amount of fun swapping the controller around, the two of us trying to work out a plan of action for each level. When we’d finally completed the game, we couldn’t believe it was 2.30am – the time had flown by. We also felt a little sick.

Oh, about the end – Portal’s ending is one of the most memorable we’ve ever had the fortune to experience. Again, no spoilers, but it left the two of us agog at its brilliance, hilarity and complete surprise. When it finished and we were brought back to the main game menu, the two of us just sat in silence for about half a minute, unsure whether what we’d seen had actually happened or was some kind of gravity-induced hallucination. Worth the admission price alone.

Which is 1200 Microsoft Points, or about £10, which seems a bit much to us, especially when you consider you can pick up The Orange Box for under £20 online. It’s the cheapest way you can get Portal on your Xbox 360, but we would have liked to have seen Microsoft make the extra content that comes with Still Alive – 14 brand new challenge maps and a handful of brand new test chambers and their advanced versions – available to download to people who already have The Orange Box, and at a cheaper price.

If you’ve already got Portal, or played through it, Still Alive will only be worth buying if, for you, £10 for 14 new maps sounds like good business. They’re all set in the white-walled confines of the Aperture Science Laboratory and all concentrate on puzzle elements anyone who played the original will be familiar with. This isn’t necessarily a bad thing, we just think it’s worth pointing out, in case you were hoping to see the outside world or something.

Portal: Still Alive is essentially the same game as last year’s original, with the same brilliance and the same flaws (accusations that the game is too short feel less potent now that there are more maps). We still want the Portal gun in the next Half-Life, Valve.

The simple ideas are often the best, and Portal, quite simply, is one of the best ideas for a game we’ve ever seen. It’s fantastically realised, brilliantly executed, and had me wrapped around its computerised finger for two-and-a-half unforgettable hours. This is gaming in its purest form.

The simple ideas are often the best, and Portal, quite simply, is one of the best ideas for a game we've ever seen.
9 Still hurts your brain 14 brand new maps Still genius Might not be worth £10 if you've already got the original

XBLA version of the award-winning puzzler.

XBLA version of the award-winning puzzler.