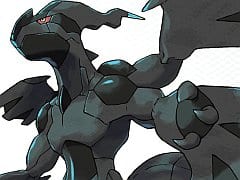 I was recently asked my most anticipated game of 2011. The answer? Pokémon Black and White. This response was met with looks of bewilderment and disgust, gradually evolving into a chorus of laughter – I’d chosen a children’s game over the likes of Uncharted 3, Mass Effect 3 and Skyrim. But as a big RPG fan, the most hardcore eastern offering of 2011 is arguably the new Pokémon. It hasn’t been too long since I retired SoulSilver to its box, however, and the sting of losing in the first round of the 2010 national Pokémon championships still lingers, was I really ready to wave goodbye to another two hundred hours on a new poké-adventure? The endorphins swimming through my veins after finding the sleek black cartridge that had appeared on my desk alluded to a resounding yes.

The start of the game presents you the age-old choice of three Pokémon: Snivy, the serpentine grass starter; fire pig Tepig; and Oshawatt the otter. After making your choice, you’re handed a Pokédex from female professor Juniper and then leave the small town of Nuvema to make a name for yourself in the Unova region. Sharing this quest are childhood friends Bianca and Cheren, whose paths repeatedly intertwine with yours over the duration. Unlike your rival in previous games, the two remain on good terms with you despite nagging for battles every five minutes.

It’s good to have friends, though, because the nefarious Team Plasma is attempting to do what all villains want to do – separate Pokémon from their trainers. They justify their shenanigans with PETA-esque morals this time around, though, arguing that keeping these poor creatures cooped up in balls all day long is unethical. Their argument is militantly enforced by King N and the Seven Sages (the upper echelon of Team Plasma). This N (quite why his name is a single letter is never explained) is your true rival; a misguided youth who walks a path similar to your own, only on the ‘dark side’ of life. The narrative feels far more poignant than in previous titles, and despite being somewhat cheesy, with words such as destiny, truth and courage bandied around with alarming frequency, it’s interesting to follow.

The biggest addition to Black and White is that each and every creature in the game (including older critters from previous titles) now has its own individual animations to accompany it in battle. They flex their muscles, wag their tails and flap their wings. My Emboar, the final evolution of Tepig, shifts his weight from foot to foot, as flames on either shoulder flicker with visible intensity. He looks totally badass.

With a few exceptions, the new Pokémon designs are excellent. Whilst more obscure creatures like Litwick (a candle) and Vanillite (an ice-cream) take some time to adjust to, you can’t help but admire the creativity of Game Freak’s art team, who have managed to add an impressive 156 new creatures to the 500-strong roster. In fact, until you reach the end-game content, each and every critter you come across is brand new. Interestingly, each pays homage to another of the original 150 Pokémon from 1996’s Red and Blue. Tracing their roots feels like a game in itself for the long-time fan.

Black and White also makes use of 3D cutscenes for the first time in the series, alongside conversations taking place with character artwork in the background – a JRPG staple heavily reminiscent of Tales of Symphonia (and its sequels). Architecturally, this is the most ambitious Pokémon game yet, with cities spanning several screens, filled with skyscrapers, alleyways and dockyards. As you cross the several huge bridges in the game, the camera shifts perspectives, zooming in and out to give a sense of scale. The world of Unova is certainly impressive, complimented perfectly by new camera angles, fancy artwork and an upgraded graphics engine.

The core gameplay remains largely the same – collecting and battling Pokémon – but there are numerous refinements that make the fifth generation of games the most in-depth so far. Firstly, it’s much faster to level up your squad. The Lucky Egg, a new item, boosts the rate of growth in the same fashion as a traded Pokémon. This also works in tandem with a rare critter called Audino, who yields enormous amounts of experience should you find one.

Make no mistake though, this is still the hardcore experience older fans are after. As soon as you beat the main game, enemies jump up 20-odd levels. If (like me) you decide to take on the Elite Four for a second time, you’ll be squaring off against opponents whose levels soar into the 70s, as well as an additional two Pokémon in each squad. Rigorous training regimes are just as important here as they’ve always been.

Ultimately it’s the little things that make Black and White superior titles to their predecessors. The Pokémart has now merged with the Pokémon Centre, meaning you can do all your healing, shopping and organising in one handy location. There are also nurses and doctors loitering many of the tougher routes in the game, so you don’t have to rely on backtracking or wasting hundreds of items to safely reach the next town. Gyms are more entertaining, cleverly designed with lifts, cannons and jelly doors (yup, doors made of jelly) to make reaching the leader that much more of a challenge. Two Pokémon can now appear at once in the wild, too, making doubles battles a more frequent occurrence.

Then there’s the C-Gear. Similar to the Pokétch from Diamond and Pearl, this gadget resides on the bottom screen, offering a host of connectivity and social features. Infra-red support allows you to battle and trade with a friend immediately, simply using the combatants that happen to be in your squad at that time. You can of course use the wireless modes for a more traditional battling experience, but IR allows interaction with other players without having to be at a Pokémon centre. What’s more interesting is Pass By Mode, which scans for nearby trainers using WiFi. Data is shared amongst players, with their position showing in real-time on your screen. From here you can request a battle, trade or simply exchange pleasantries. It’s worth pointing out that I was unable to test Street Pass and the other WiFi functions first hand, as there’s nobody with a copy of the game currently wandering the streets of Croydon.

If you have a DSi you can also make use of the Xransceiver, which allows up to four players locally – or one over WiFi – to video-chat as they play. This could well be the first interesting use of the DSi camera since the console launched. On top of all this, there’s also the Dream World available through a Global Link website (the EU version should be live shortly), allowing you to interact with your Pokémon when you’re away from your DS.

At time of writing, I’ve invested a total of 35 hours into Pokémon Black. My Pokédex currently reads 276, I’ve caught three legendaries, and, oh yeah, I’m the Pokémon champion. I’ve barely scratched the surface, however. Once the credits roll, the real game begins. Your Pokédex is upgraded with a national mode, increasing the number of entries to a flabbergasting 645. Another three towns are opened up, as well numerous caves, shrines and forests that were previously inaccessible. The Transfer Machine becomes available, too, permitting transfer of Pokémon from previous games. There’s even a whole new story arc to tackle as you help out a rather amusing police officer hunt down the Team Plasma’s rogue Seven Sages.

After Pokémon SoulSilver I thought developer Game Freak needed to do something with the classic formula. The series needed to evolve, I japed. Sadly, that hasn’t happened. For all its added features and refinements, Black and White still rigidly follows the tried and tested formula. The leaps and bounds folks like me have been hankering after will have to wait until the inevitable 3DS version. Until then, however, rest assured in the knowledge that Black and White are damn fine games; the best the series has to offer.

Rest assured in the knowledge that Black and White are damn fine games; the best the series has to offer.
9 645+ Pokémon C-Gear offers incredible social features New animations and cutscenes Same old formula

Featuring the next generation of all-new Pokemon.

Featuring the next generation of all-new Pokemon.