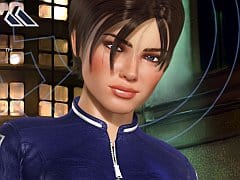 It seems like it’s taken an eternity to happen, but classic Nintendo 64 FPS Perfect Dark is finally available on Xbox LIVE Arcade for the Xbox 360. With spruced up 1080p visuals, a slick frame rate and eight-player online multiplayer, this is without a doubt the best version of the game to date, but just how well has the shooter aged in the 10 years since its original release? While there are certainly some areas that modern gamers will find hard to tolerate, Perfect Dark offers considerable bang for your 800 Microsoft Points and a huge dose of nostalgia.

If you missed it the first time around, Perfect Dark was Rare’s follow-up FPS to the hugely successful and critically acclaimed GoldenEye. The formula is very similar, although this time instead of playing as the suave secret agent, you’re in the shoes of sexy female spy Joanna Dark and we’ve moved to a futuristic sci-fi setting. Think Blade Runner meets James Bond and you’re somewhere in the right ballpark. The campaign is full of advanced weaponry, stealth and cool gadgets, as well as some great NPCs – one in particular divided opinion all those years ago and is likely to do the same now.

As in GoldenEye, missions can be tackled in three ways: agent, special agent and perfect agent. Each of these difficulty settings introduces new objectives that need to be achieved, so while agent might require you to do little more than flick a switch and get to the end of the level, the latter two options require much more roaming around in order to complete all the objectives. Playing on the most basic agent difficulty should be for beginners only as you end up missing out on more than half the game’s objectives and the levels themselves end up feeling really small due to the lack of exploration.

Rare and 4J Studios have done a good job porting the original N64 game to the Xbox 360. Rather than simply throw it across, warts ‘n’ all, the devs have got the game running natively at 1080p (a huge step up from the low resolution original), smoothed out the frame rate, improved character and gun models, and made new high resolution textures. The result is a game that still looks dated compared to any FPS released in the PS2 era or later, but a big improvement over the original. The frame rate is perhaps the biggest plus point, as it actually makes for better gameplay. The N64 was plagued by an almost perpetually slow frame rate (a regular problem for Rare during the N64 period), and it’s great to see the game running smoothly for the first time.

What isn’t so great is how the game design hasn’t been touched. A problem for some gamers will be the complete lack of map and objective markers. Level designs were great back in the day, but now the samey corridors make navigation somewhat of a pain, and it’s easy to get a bit lost. You’ll frequently have to complete numerous tasks to achieve a single objective, but the game gives you no information on how close you are to doing this, nor does it give you any indication as to where you need to be heading. Combine this with instant mission failure if you accidentally kill or destroy an item key to an objective, and no mid-mission checkpoints, and some gamers will certainly feel more than a little annoyed during their time with the game.

Playing first-person shooters on the N64 was good in that era, but today the controller’s single analogue stick makes shooters feel somewhat awkward. New here is a dual analogue stick control system, bringing the gameplay up to par with modern first-person shooters, although the game’s auto aim (essential in the N64 original) does feel a bit too helpful now – thankfully it can be turned off. Precision aiming also annoyingly roots you to the spot, whereas modern games would simply slow down your rate of movement while zooming in slightly.

There’s no denying that this is a great package, though. As well as the excellent, albeit in places dated campaign, there are two two-player game modes (standard campaign co-op and counter-ops, in which one player is Joanna and the other takes on the role of an enemy), four-player split-screen and eight-player online support across a variety of maps and game types. We’ve yet to be able to test out the online play, but four-player split-screen is great fun and certainly brings back many fond memories. With the weapons from GoldenEye and three of the most popular maps included here, many GoldenEye fans will be able to stop hoping for the remake that’s never going to happen. Four mates, a smooth frame rate, one couch and GoldenEye settings makes for one brilliant nostalgia-filled evening.

On top of this there are unlockables galore, including a truck load of cheats (getting all these provided us with hours of fun back in the day) and Achievements. Online leaderboards are included for every level in the game, so you can see how you compare to the rest of the retro gamers the world over. It seems as though 4J really left nothing out of this XBLA edition of Perfect Dark. There are even pre-set control layouts for Halo and Call of Duty fans, but no way to play using a single analogue stick.

The wait for Perfect Dark on the Xbox 360 has been worth it, but don’t hand over your 800 Microsoft Points expecting a modern FPS. This is old-school gaming, with none of the modern day handholding we’re used to, but it’s jam-packed with gaming goodness. The campaign can be frustrating due to a lack of direction, but it’s still full of great moments, and the multiplayer is as much fun as it ever was. Perfect Dark is no longer the pinnacle of console shooters, but it’s clear why it was held in such high regard. Yes, it’s better when played while wearing rose-tinted spectacles, but anyone who enjoyed the original already owns a pair.

The wait for Perfect Dark on the Xbox 360 has been worth it. This is old-school gaming, with none of the modern day handholding we're used to, but it's jam-packed with gaming goodness.
8 Rammed with content HD visuals and smooth frame rate Still great fun Old-school game design