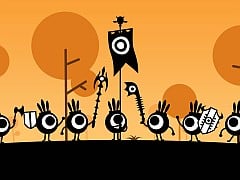 We’ve had some strange genre combos in video games over the years. Puzzle Quest must go down as the most successful hybrid game though, with its RPG character development systems being brilliantly fused with a traditional puzzle game mechanic for battles. Savage on the PC mixed first-person with RTS and Spore seems to want to offer a different game type for each of its main stages of evolution. So where does Sony’s quirky PSP title Patapon fit in? Well, it’s a rhythm action game mixed with an RTS. How didn’t you guess?

All joking aside, Patapon is without doubt the most unique game I’ve ever played. On a purely visual level you’d imagine it to be a more action oriented LocoRoco – in fact Patapon is from the same development studio – but you actually have no direct control over the on-screen characters, at least not in the usual way. Your army of Patapon warriors, who are incidentally fighting to get to an object only known as “It”, are controlled by the Almighty (that’s you) by beating four drums to certain beats. At first it’s completely bizarre but soon becomes second nature as you command your troops to advance, attack, charge and retreat.

Over the course of a 10-hour campaign you’ll complete levels built around three ideas: hunt, battle and boss. Hunting levels see your army killing indigenous beasts to gather items needed to grow new Patapon warriors (on a tree no less), battle levels see you fighting the Zigaton army, looting them of weapons for use later in the game, but it’s the Boss battles that are most interesting. Pitting your army against a giant beast, you’re required to learn the enemy’s attack pattern before you stand a chance, and because they get tougher the more you play, there’s even value in replaying completed fights.

Before each level you have the option of arranging your battle formation, choosing three from the six on offer. While you don’t have access to all six from the start, in the end you’ll be able to choose from foot soldiers, archers, cavalry, spearmen, cavalry, musicians and heavies – although they each have different names in the game. Musicians might sound a little odd for the battlefield, but these guys launch projectiles from their instruments, making them well worth considering for battle. How many soldiers from each group you can take into battle also varies, so you’ll have to pick carefully.

Key to the whole game is the rhythm action gameplay. Throughout each level there’s a beat and it’s your job to command the Patapons by playing tunes to that beat. For example, the most basic and first command you learn is Advance, played with the tune Pata Pata Pata Pon, or Square, Square, Square, Cirlce. Once you’ve input the command the Patapons repeat it and then you enter another, ideally building up a combo of 10 commands that will send them into fever mode, giving them greater abilities in battle.

In addition to the standard commands you’ll also learn how to perform various miracles, used to aid your progress in a level or to give you an attacking upper hand – such as changing the wind to allow your archers to fire longer distances or summoning an earthquake.

As delightful as the game is to look at and listen to – think the cuteness of LocoRoco with a dark twist – it’s not without flaws. The biggest problem is how often you’re going to need to replay levels in order to collect vital items needed to progress. The quirky nature of the visuals and the catchy tunes make some of this tolerable, but by the end you’ll probably have grown tired of having to work through the same level for the umpteenth time. Maybe we’re asking for too much from a PSP game released at a bargain price of £25, but the game is also devoid of any multiplayer or online functionality, meaning there’s no way to let others see the army you’ve created and the gear you’ve managed to acquire.

After LocoRoco I didn’t think I’d see a game that would compete with it for cuteness, but Patapon comes very close. The game as a whole doesn’t stand up quite as well as LocoRoco’s brilliant simplicity but it’s still a wonderfully original experience. It’s easy to recommend Patapon to almost anyone with a PSP, especially if you’ve got a soft spot for catchy little tunes and don’t mind annoying everyone around you while you play.

It's easy to recommend Patapon to almost anyone with a PSP, especially if you've got a soft spot for catchy little tunes and don't mind annoying everyone around you while you play.
8 Looks superb RTS crossed with rhythm action Sound is inspired Replaying old levels

Patapons follow the beats of your mighty war drum, and as lead…

Patapons follow the beats of your mighty war drum, and as lead…