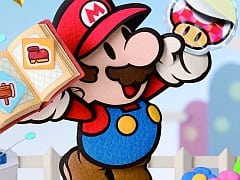 The latest Paper Mario game is designed around stickers, but it’s certainly a less capable adventure when the player becomes unstuck. Sticker Star is a beautifully constructed world – and one which makes ample and effective use of the handheld’s 3D effect – but it often feels stymied with numb combat and muddied by a procession of trial-and-error repetition.

Progression in Sticker Star comes from obtaining special stickers, which start out as ‘real’ items that you’ll find when pottering around its six large worlds, transformed by flinging them at a wall in the presence of an amusingly dodgy Toad. To solve puzzles, these unique items are combined with Mario’s ability to ‘paperise’ the screen, which turns this intricate pop-up three-dimensional world into a flat 2D plane and allows him to press stickers onto marked parts of the stage. Put the right item into the right place, like a radiator near a snowed-in building, and you’re laughing.

Often, though, you’ll simply find yourself backtracking through levels because you don’t have the right bloody sticker, with many chunks of your magical album hidden in bizarre, unexpected places. It certainly doesn’t help that your spangly, forgettable companion is absolutely no help when you’re at your most bothered – despite the left bumper being designed to provide assistance – and her frequent reminders to just paperise things smacks more of stewed condescension than any real insight. Because knowing to paperise is never the problem: the problem is in finding the doohickies and wotsits you’re supposed to be using in the process.

Sticker Star’s difficulty doesn’t come from challenge or confusion, then, but rather it tests your patience by throwing you through yet another laborious, meandering slog. How I often longed for a level where you just went from A to B and collected something shiny at the end. Nintendo is famous for making family-friendly games, but at one point I muttered a string of expletives so explicit it would have caused Mary Whitehouse (RIP) to spontaneously combust.

This is a long game, and it’s one padded out with turn-based fights reminiscent of the earlier games in the series as opposed to Super Paper Mario’s iffy real-time combat. Yet the system is pared back to the extreme, ditching most of the bonuses and rewards conferred by a traditional role-playing system. Mario isn’t cutting through swathes of enemies to gain levels and boost stats, and the system’s one and only complexity comes from the rhythmic tapping of your A button in tune with each stickers’ attack.

Much like with those weary puzzles, every attack in the game – such as Paper Mario’s classic jump, hammer or green shell – comes from its own one-use sticker. It’s a neat idea, and the world is scattered with enough stickers that you’ll always be using a variety of attacks on the game’s detailed and imaginative roster of foes, but the novelty quickly wears off and you’re left with a set of mechanics packed with imagination but sadly lacking in tactics.

It doesn’t help that the game is often painfully simple, with most regular enemies falling over in seconds once you quickly work out which stickers work best on them. Combat then becomes empty and saccharine, and generates a kind of monotonous frustration of their own as you’re angrily backtracking through cleared levels looking for elusive items or other fetch-questy tasks, such as when the game asks you to piece together the scattered parts of a friendly character or collect the lost pieces of a bridge.

Yet the worlds and stages all these problems are wrapped in saves Paper Mario: Sticker Star. This is a game absolutely rammed with nods and winks, and a sharp script delivers some blisteringly good lines that feel like they’re designed exclusively for anyone who grew up in the Super Mario World era. There’s even a bizarre yet hilarious moment where Birdo appears and performs a song about gender – enough said, really.

Sticker Star’s lavish tapestry of neat touches keeps you pushing forwards in spite of the wonky puzzling and boring combat, and its vibrant, buoyant world marries so well with the script’s deliciously wry take on Mario’s classic tropes. It’s just a real shame that the rest of the game feels paper thin.

This review was written after spending 14 hours with the game. Nintendo provided VideoGamer.com with a retail copy of the game.