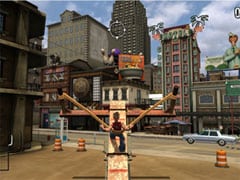 Presented with Pain without any expectations, it’s easy to expect a futurist violent racer with a heavy metal soundtrack, or perhaps a horrific adventure with lashings of blood and fantastical orc-like creatures. In fact, it’s a rather silly, tongue in cheek physics toy, full of excess and without a drop of blood in sight. A lack of gore however, doesn’t mean there’s a lack of violence, and though it’s all very comicbook, Pain’s hapless hero endures more mistreatment than all of Manhunt 2’s enemies combined.

The premise of the game is simple. In various three-dimensional areas, you take control of an enormous fixed-position catapult. Rather than firing traditional ammunitions, your payload takes the form of a vastly indestructible human being. Again and again you must fire him into the city, sending the brave projectile straight into the sides of buildings and down into the streets below.

The areas themselves are certainly not set in locales where earthquakes are prevalent, as each is filled with towering scaffold that is barely fixed together, stacks of explosive crates carelessly piled, loosely assembled brickwork, and a huge range of other heavy objects perilously close to toppling from their position.

Combining elements of the Flatout; Ultimate Carnage mini-games, the bailing missions in Tony Hawk’s Project 8 and internet Flash game Line Rider, success in Pain comes from launching your victim into as many objects as possible, bouncing from one to another. The longer and more intricate your destructive path from the catapult to a stationary position, the higher your score.

To add a little skill and variation, you have several abilities once in the air. You can steer, pull various flying stances, grab objects, and throw things you take hold of. A technique called ‘Ooching’ also allows you to exaggerate your bounces, letting you draw out massive combos as you ricochet about the level.

There are numerous takes on the basic game, such as missions where you have to grab objects or people from the air and fling them at targets, and there are a wealth of multiplayer games including classic scoring challenges like HORSE, and a very daft bowling game. Although, like LocoRoco Cocoreccho on PSN, Pain is as much an interactive virtual toy as it is game, it includes far more game modes than is typical of titles like this from Sony’s online store.

Visually the game is fairly ordinary, though it does have its own unique style, and there is plenty of wit in both the sound and graphical design. While things do get a little repetitive after a while, there’s a huge amount here for your money, and though it will likely be little more than a passing fad, Pain deserves plentiful success. With several planned expansions, Pain is another gem in Sony’s underrated PSN crown.

While things do get a little repetitive after a while, there's a huge amount here for your money, and though it will likely be little more than a passing fad, Pain deserves plentiful success.
8 Accessible, simple fun Hilarious and silly Loads of features for a PSN game Potentially repetitive