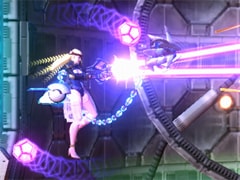 Slowly but surely Xbox LIVE Arcade is doing something to bring perhaps the oldest gaming genre ever back to the masses. In recent years the 2D shooter has been categorised by insane difficulty, Japanese exclusivity, arcade-only releases and four-figure prices, but with Geometry Wars, Ikaruga, Rez HD, Space Giraffe and Raiden IV in various states of release, suddenly getting your hands on the hardest of games has become increasingly easy.

While Omega Five might sound like a dubious dietary supplement, it is in fact a wholly original and reasonably respectable interpretation of what the truly hardcore shooter, or shmup, has become. If you’re familiar with R-Type Final or Gradius V you should have a fairly familiar sense of what the latest from cult publisher Hudson entails. As the screen scrolls on a horizontal plane, you must dodge enemies that approach from all sides, weaving through patterns of bullets and sending a hail of firepower into the waves of mindless foes.

This is something more than fresh IP however, as Omega five does much to differentiate itself from the slew of shmups that stick to the guaranteed formula for shooting goodness that sees you take to the helm of a diminutive space ship and hold an auto-fire button. First off, you control a surprisingly large humanoid character, or rather one of several on offer. Secondly, and most importantly, rather than simply jabbing at a button, you use the right stick to aim, aping the proven technique of Geometry Wars and its clones. In a scrolling environment this takes a little while to get used to, and most of us may be rather too familiar with twin stick shooting, but nonetheless developer Natsume should be praised for daring to defy the established rulebook of the scrolling shooter.

Visually the game is very tasty, bettering almost every XBL release to date. Despite this, there are some problems with the function of Omega Five’s graphics. Quite simply the tangle of bullets and collectables can be rather hard to distinguish, which is unforgivable in the more challenging sections, and it must me emphasised that it is the look of the bullet patterns that is to blame and not the volume on-screen. Similarly the ‘hit box’, which is the area of the character that takes damage when in contact with enemy ammunitions, is hard to distinguish from the parts of your avatar that are invincible.

If you really love your shmups, and know your Judgement Silversword from your Radiant Silvergun, Omega Five does pale in comparison to the more legendry offerings. For seasoned bullet dodgers the ‘curtains’ of ammunition won’t be particularly exciting, and while the difficulty is extremely challenging for the ordinary player, achieving the sought after 1CC (one credit completion) won’t give you months of gameplay in the same way Dodonpachi does. A health bar instead of a one-hit death system will also likely raise noses in the shooting community.

Still, at a time when some dusty old Mega Drive shmups go on eBay for well in excess of £100, this is an excellent and affordable contribution to the genre, and should do much to stimulate interest in one of the purest forms of gaming. If mainstream releases are leaving you feeling a little uninspired, Omega Five should be just the kind of boost your daily intake needs.

Omega Five is an excellent and affordable contribution to the shmup genre, and should do much to stimulate interest in one of the purest forms of gaming.
7 Fresh scrolling shooter IP on XBL A great introduction to hardcore shooting A high class game at a bargain price Some visual mechanics let down the graphics