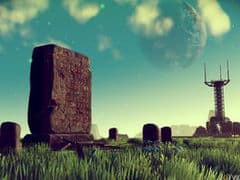 For those of us old enough to remember when computers were rubbish, and only accepted commands via yellow-stained keyboards, the spectre of Elite looms over No Man’s Sky like a red giant about to go nova.

No. The spectre here is one of common pitfalls. Space trading/combat/exploration games with vast, procedurally generated universes (what we used to call “Elite Clones” back when the discourse around video games had barely evolved beyond “how many guns”) are not a new thing, and the methods employed to make them are well documented. All of them have broadly the same strengths and weaknesses. In the simplest terms, they tend to be big… and, after a while, boring.

No Man’s Sky makes an admirable effort to stave off the latter, and does a lot of wonderful things. It has a gorgeous and instantly recognisable aesthetic, inspired by thousands of book covers from the golden age of science fiction. Zipping around its improbably-proportioned solar systems feels like flying into the dust jacket of a Harry Harrison novel. It has the same overly-saturated palette, the same geometrically bizarre ship designs and landscapes, the frankly absurd skies as seen from planet surfaces in which neighbouring worlds hang closer and more imposingly than seems possible outside of a Ralph McQuarrie painting.

Colour schemes shift wildly from one hue to the next. The vegetation and fauna you’ll encounter will veer from Earth-Like to Acid Trip from world to world. No Man’s Sky’s much hyped procedural generation system for life, and the terrain it spawns on, does its job extremely well. No two species are exactly alike, and while extended play will reveal that certain features and body parts crop up more often than others, I have yet to see two animal types that aren’t noticeably distinct from each other. However, the only obvious distinctions are cosmetic – you’ll see the same behaviours and animations replicated everywhere.

The big question asked of No Man’s Sky during its pre-release hype was “yeah but, what do you do in it?” Well, the short answer is “mine and craft”. You’ll be instantly familiar with the game loop if you’ve played one of the many open-world survival games on Steam Early Access. Or, er, Minecraft. You’ll start off on a fresh planet with a broken ship, some blueprints and a “multitool” (“gun”), and be gently advised to start plucking resources from the landscape, so you can make things that ensure your continued existence and get your ship running. This constitutes the bulk of the game. A very restricted slot-based inventory keeps you on your toes, making it impossible to rinse any one location before moving on. None of the resources you need to fund your adventuring are particularly hard to come by, but you will run out of them frequently, necessitating constant scavenging. Even with fully upgraded pockets, you’ll be seeing the “inventory full” message more times than can be deemed polite.

The carrot at the end of the stick lies in the mystery. A smattering of loftily-worded nuggets of something akin to a narrative are seeded throughout the universe, dangling for your attention. There are a few explicit goals should you choose to pursue them; the most overt ones being that of reaching the centre of the galaxy, and following “the path of the Atlas”. In reality, both threads are intertwined, and rely heavily on obtusely vague passages of text which tease a fascinating in-game lore, but never quite develop into one. Players will set goals for themselves, of course – it’s easy to become fixated on getting that weapon upgrade, or earning enough to buy a better ship.

On-foot combat is as basic as first-person shooting can get. There are no iron sights, no cover system, just straight-up shooting from the hip. You’ll be doing it a lot, because mining the resources you need attracts the attention of Robot Space Polis (or “Sentinels”), who take a dim view of people nicking plutonium shards out of the ground. The practicalities of mining, by the way, sum up as “shooting at stuff”. So the vast majority of your time is spent shooting at stuff, be it rocks or space crabs or robot police.

For a few hours, maybe the first ten, No Man’s sky seems to have something new up its sleeve every time you warp to the next star. Your interactions with the resident humanoid civilizations will seem rich with promise, being text dialogues with a faint whiff of choose-your-own-adventure novel about them. The (lone) occupant of every space station, trading post and colonial portacabin will exchange knowledge for specific items or resources. Eventually though, No Man’s Sky settles into an extended grind. It doesn’t take very long for the patterns to start emerging, for the signs to start showing that, yes, this procedurally generated cosmos has the same fundamental problem as every one before it; that by the time you’ve figured out how to get around, you’ve pretty much seen everything it has to offer. This wouldn’t be such a problem if it wasn’t so afraid to make the player figure anything out.

Traversal is the defining component of every space sim. No Man’s Sky’s contemporaries – namely Elite Dangerous and Star Citizen – make a point of having your ship feel like a real machine, with screens to monitor, systems to manage, and controls to learn. Overshooting your destination is possible. The vast distances involved require skill and smarts to conquer. The fact that Elite’s galaxy is made up of endlessly repeated shit is somewhat mitigated by the attention demanded by its finer details. Another valid comparison is Euro Truck Simulator – a game that’s dull as fuck, but gets away with it by putting all of the player’s attention on the driving, not the destination.

No Man’s Sky doesn’t have time for any of that. Interplanetary travel is as easy as pointing your nose at a planet (that usually fills about 20% of your screen) and engaging the pulse drive. Landing is automatic, and requires no more interaction than a single button press. Space combat and asteroid mining are as (un)involved as their grounded equivalents. Just point and shoot, and let the details be taken care of by generous auto-aim and a magic hoover.

It’s not that No Man’s Sky is wrong to attempt to simplify space travel, or to take the minutiae of it out of the player’s hands. It’s just that it does so to such an extent that getting around its galaxy is devoid of any tension. The stakes are so low that the space travel itself, the very thing people buy this to do, becomes little more than a nicely shaded loading screen between locations which, behind the window dressing, are functionally identical. Even the gimmick of being able to give amusing names to the things you discover wears thin, there being a limited supply of bum and willy euphemisms that aren’t blocked by the profanity filter.

No Man’s Sky fails at a fundamental level; it’s designed to be played endlessly but in the end, it simply doesn’t have the stamina to sustain itself. Which is a massive shame, because it has a lot going for it. It’s often very beautiful. It has an infectious attitude about it; a bold game from a tiny studio that has all the swagger of a billion-dollar title, driven by a solid aesthetic and massive ambition. It’s very obviously a labour of love, an attempt by an enormously talented director to improve and rejuvenate a genre whose progenitors are beloved by many developers of his generation. Sadly, the end result can’t avoid being the latest addendum to the Chilcot-sized body of evidence that procedurally generated galaxies just aren’t that interesting.

But, for that first ten hours or so, for that sliver of space-time where all of it is new, it’s quite brilliant. The design decisions you can point to as flaws are always at least understandable. It’s full of great ideas and great moments, regardless of how long it takes for you to get fed up of them. So while it’s difficult to give it a glowing recommendation, it’s impossible to hate. On balance, it succeeds – for just long enough to be worth going in.

For more on No Man’s Sky, check out our exclusive interview.