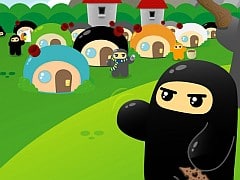 Everyone loves ninjas. Everyone has at one point in their lives imagined themselves as one of the cut-throat assassins, silently dropping out of a tree in some forest somewhere and slicing and dicing a pirate, perhaps, before disappearing in a puff of purple smoke. They’re just plain cool, and not, most definitely not, cute.

But the ninjas in Ninjatown, the DS tower defence strategy game based on the Wee Ninja from the US-based Shawnimals plush toy range, are just that. In fact, we’d even go as far to say they’re super cute. Bad idea? You might think so, but after ten minutes with the game, you’ll wonder why no-one’s done it before.

Ninjatown begins with a startled Ol’ Master Ninja being awoken by Ninja Consultant, who brings word of an erupting volcano. It’s all down to the wonderfully named Mr. Demon, an evil being who lives in the nearby Dark Forest. With Mr. Mayor cowering under his desk, it’s down to Ol’ Master Ninja to defend Ninjatown from Mr. Demon and the thousands of Wee Devils under his control.

It would take a cold-hearted grouch of epic proportions to find Ninjatown too cute for its own good. Everything from the bubbly art design to the excellent dialogue (“The Baby Ninja’s uncontrollable cuteness makes it a perfect ally against Mr. Demon! Place the Baby Ninja token anywhere on the Touch Screen and activate it to slow down any enemy that wanders too close!”) is guaranteed to make you smile, but it’s the cleverness of the gameplay and how it’s been tailored to short, sharp bursts that makes Ninjatown great.

You see the action from a top down perspective, with the DS touch screen providing a close-up view of the action and the top screen providing a map view. Each map is divided up into various square building lots on which ninja huts can be built. It’s around these huts that your ninjas patrol, fighting off waves of Wee Devils as they pass into their spherical range.

At first things are kept very basic, indeed Ninjatown’s learning curve is as smooth as they come. The opening units at your disposal are Wee Ninjas, which are good all rounders, and Anti-Ninjas, which have strong attacks but are slow. Your goal is to prevent Wee Devils from making it to the end of the map – hearts on display on the top screen show how many can progress before you lose Ninjatown to Mr. Demon.

You can upgrade Ninja Huts with cookies, which you earn by defeating enemies. Upgrading is essential because it increases your ninjas’ Ninja Level, allowing them to defeat stronger enemies. Because you only have a certain amount of cookies to play with, however, you’ll need to balance the strategic building of new Ninja Huts with the upgrading of existing ones, depending on how you’re doing. This quick-fingered resource management forms the basis of Ninjatown’s gameplay.

The best thing about Ninjatown is that it’s easy to pick up and play but hard to master, perhaps the golden chalice for all game developers these days. You can get through much of the early part of the game with clever placement of Ninja Huts, but when things start getting a bit crazier more advanced techniques are essential for success. Despite the fact that the game is drowning in its cute art style, there’s some hardcore strategy to be found. You’ll need to survey the map and decide whether it’s better to build huts where enemies emerge, or around modifying structures that grant bonuses like increased attack power, for example. Micromanagement plays an important role, too. You can set rally points to tell your Ninjas where to wait for enemies and use special ninja powers, like tapping on a ninja to give them a speed boost, direct a gush of wind triggered by blowing into the DS microphone, or shout to give all your on-screen ninjas a jolt and replenish their energy, to give only a few examples.

And as you progress through the game you’ll encounter new enemies that pose new challenges, as well as gain access to new ninjas with their own advantages. For example, there are flying enemies that can only be hit by slingshot-wielding ninjas, super strong enemies that do a damaging area of effect ground pound, and very fast enemies that can avoid slow ninjas. You’ll also need to use ninjas that cause status affects, like White Ninjas that chuck snowballs that slow down and freeze, to combat some of the more challenging bad guys. Analysing the threat and reacting to it with what works best against it is one of Ninjatown’s, and the tower defence genre’s, most enjoyable mechanics.

Each map shouldn’t take any longer than ten or so minutes to either complete or fail, with most challenging you with 15 waves of varied enemies. This makes Ninjatown well suited to a regular commute, with a sense of progress and achievement that can be lacking in less travel-friendly hand held titles. Even if you manage to complete all of the game’s maps, there’s replay value in achieving a perfect A rating on all of them, only rewarded if you finish without any Wee Devils getting through your defences. And, once you’ve done that, there’s a two-player multiplayer mode to try out. While it’s bare bones (there’s only one game mode – who can fend off the waves of Wee Devils quickest – and no online play), you can play two-player with only one copy of the game (this reduces the number of maps available, if you play with two copies they’re all available).

If we’re being picky, we could say that Ninjatown might be a bit too cute for some, and not quite as in depth as other tower defence games on the DS (the recent Lock’s Quest springs to mind), but on the whole it’s a fun, accessible strategy title with a lovely art style that’s sure to please fans of the genre. Who’d of thought it? Cute and ninjas can work.

Ninjatown is a fun, accessible strategy title with a lovely art style that's sure to please fans of the genre.
8 Lovely art style Easy to pick up but hard to master Bare bones multiplayer Not as in depth as some would like

Based on the Shawnimals’ designer toy line.

Based on the Shawnimals’ designer toy line.