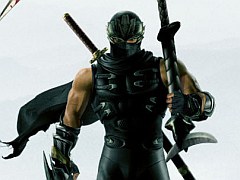 We always hear from developers that they’ve upped the scale, scope and all-round epic nature of their game for the sequel. So and so game has twice as many levels, another has bigger bosses, another includes some new moves. With Ninja Gaiden 2 Tomonobu Itagaki and his Team Ninja staff have managed to produce a game that has more variety than you could ever imagine, a storyline that spans the globe, enemies so diverse you expect something new around every corner, combat so brutal you’ll be wincing until the closing credits and a style that is so effortlessly cool it could only have come from one man. To use a phrase from Gears of War designer Cliff Bleszinski, Ninja Gaiden 2 is more bad ass than its predecessor in every conceivable way.

If you haven’t been following the Ninja Gaiden series over the past few years you probably aren’t prepared for how difficult Ninja Gaiden 2 is. Although the easiest difficulty setting (available from the start) isn’t as hard as the Xbox game’s default level, it’s still punishing to all but the most experienced action gamers. It’s on a completely different level to current genre favourite God of War. To put Ninja Gaiden 2 into perspective, I was able to beat God of War and its sequel fairly comfortably on the default difficulty – on the easiest difficulty Ninja Gaiden 2 almost made me gnaw my fingers off. It’s almost never unfair, but unless you’re 100 per cent focussed don’t expect to make it very far.

Although lead character Ryu Hayabusa gains quite a selection of weaponry as you move through the game, it’s his block and dodge moves that are key to survival. You might be able to button mash your way through one or two enemies, but soon enough you’ll be using health elixirs like no tomorrow and seeing the Game Over screen enough to have it burnt onto your retinas. Learn to use your block and when to counter attack and you’ll be on your way.

Joining your melee weapons are a number of projectile weapons, ranging from your default shuriken to a gatling gun-style spear gun for use underwater. Most of these have a limited supply of ammo, with more available from fallen warriors you find on your adventure and at shops scattered around each level. Handily, Ryu automatically targets enemies when using a projectile weapon, although weapons like the bow and gun can be manually aimed if you want to hit a certain location on an enemy. One of the keys to the game is working out which weapons work best against each enemy type, so thankfully the d-pad offers a quick weapon-change, eliminating the need to go into the pause menu.

Your third means of attack comes from magic, or Ninpo as it’s called in the game. Fire-filled icons below your health bar show how many Ninpo strikes you have at your disposal. Holding Y and B down initiates a monster slaying Ninpo attack and you have a few seconds to aim using the left analogue stick. As with your weapons, these powers can be upgraded, allowing you to dish out more damage. To begin with you’re limited to a fire attack, but soon enough this will be joined by wind and fire bird attacks. Unless you’re a true expert these special magic abilities will be essential during boss battles, so it’s wise to stock up on replenishing items.

Enemies in Ninja Gaiden 2 come thick and fast and in large groups. You’ll face warriors, giant lizard monsters, dogs, frenzied bats, gargoyles, metallic scorpion-like spinning nasties, werewolves, flying piranhas and more – in fact, that lot are just from the game’s opening third. Your health bar in Ninja Gaiden 2 uses a replenishment system, meaning you don’t need to use elixirs to get your energy back. When you beat a wave of enemies your health is re-filled, but any sustained damage (shown by red in your bar) is permanent unless you use a health elixir or blue essence. Fallen enemies release essences of various colours, with yellow essences acting as the in-game currency used to purchase new items and upgrade weapons, Red essences replenish your magic, and blue essences heal semi-permanent damage.

You don’t always want to absorb these essences for health though. By holding down the Y button Ryu draws them in, allowing him to unleash an Ultimate Technique move. These devastating moves destroy any enemies standing in your way and look spectacular to boot. The standard combat is also extremely brutal, with limbs flying and blood spilling all over the place. All this carnage remains in place too, with body parts lying strewn across the floor and blood smeared over walls. Part of the carnage comes from the new obliteration moves, triggered by pressing Y near to a damaged enemy. It’s essential you perform these finishing moves as enemies will keep going at you until they’re dead – one set of enemies even commit suicide by blowing themselves up while on top of you.

In stills Ninja Gaiden 2 doesn’t come close to showing its true beauty. In action, with Ryu moving with the fluidity of a ballet dancer and enemies being ripped apart limb by limb, blood spurting out all over the place, it’s a sight to behold. It doesn’t have the same “WOW” factor of something like Gears of War or BioShock, or even DMC4, but it’s still a fine looking game. The best is reserved for the bosses, which are immense. We’re talking proper Shadow of the Colossus scale beasts here, each with numerous attack stages and techniques for taking them down. Just when you think you’ve seen it all you’ll come fact to face with another giant monstrosity that defies belief. As with the rest of the game, they’re no push over either, with more than a handful almost resulting in my 360 controller being hurtled into the TV screen. If you’re able to beat Ninja Gaiden 2 on the hardest difficulty setting you have my utmost respect.

Much has been made of the included Ninja Cinema mode, which lets you watch replays of your action in the game – absolutely all of it – but it’s pretty basic. All you’re able to do is watch what happened as if you’re actually playing and add a black and white filter if you wish. Without the ability to change camera angles or slow down playback it feels like a mode that hasn’t been fully fleshed out, which is a shame. Viewing some of the combat in glorious slow motion would have been great. You’ve also got online leaderboards, although given the game’s hardcore following you’re going to have to be pretty good to get anywhere near the top.

Negatives are few and feel like being picky considering the overall quality on offer. The story is largely forgettable and simply serves to fill the gap between levels. Voice acting is pretty cheesy too, although the voices of the main baddies are typical ’80s cartoon quality, which makes them sound pretty menacing and cool. Swimming is once again something I’d rather avoid if possible, with the underwater controls feeling a tad clumsy. Running on water is handled well, but if you get caught in a fight it’s all too easy to miss an attack and fall in, resulting in some easy hits for your foes. Some complaints could also be levelled at the save points, which on occasion are a little too spread out and the frame rate drops from time to time during particularly action packed moments.

Playing Ninja Gaiden 2 is a very different experience to playing the majority of games. No other game I’ve ever played is as rewarding so often. Whether it’s for simply beating a wave of blood-thirsty bats or for finally slaying a boss you’ve been tearing your hair out over for more than an hour, the sense of reward and gratification is practically unrivalled. For every level you beat you feel like you’re becoming a better gamer and that’s a feeling that very few games can claim to give. This is action gaming at its very best.

For every level you beat you feel like you're becoming a better gamer and that's a feeling that very few games can claim to give. This is action gaming at its very best.
9 Difficult but fair Awesome boss battles Fluid, brutal combat Story is forgettable