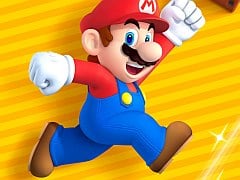 In New Super Mario Bros. 2, capitalism has zipped out of a warp pipe and found its place in the mushroom kingdom; the back of the box instructs you the game’s main objective is to gobble up a million gold coins by whatever means necessary, and there’s a running tally in the bottom of the screen on the world map. After clearing out the game’s main six worlds and assorted hidden gubbins I had just over 25,000. One million. What, you might ask, do you actually get for performing such an impossibly gargantuan task? A new title screen.

If I spent one million of anything, let alone gold pieces, on a new title screen I’d want a refund.

New Super Mario Bros. 2 is the Rich Tea biscuit equivalent of a Mario game; okay in a pinch but certainly not a favourite. I wouldn’t pick it first from the biscuit tin, either. It doesn’t really do anything wrong, but its fatal flaw is that it just doesn’t really do anything. You run to the right, jump over some platforms and stomp a checklist of classic adversaries. This time around you’ll spend your time predominantly in the Fire and Raccoon suits, and I’m sure you already know how they work.

When it comes to new features, the game often acts like a stroppy child being forced into doing the washing up, doing as little work as possible before huffing and puffing their way back upstairs. Many of Mario’s new doohickies solely revolve around the accumulation of wealth, which pretty much summarises Nintendo’s philosophies behind New Super Mario Bros. 2’s entire existence. Chief amongst the additions is a box you can wear on your head that spits out coins, some new boxes that spit out random allocations of coins, and a golden hoop you can jump through to turn enemies golden and make them drop loads and loads of coins. The whole game is essentially one of Bob Diamond’s fondest wet dreams, made slightly more galling by the fact it feels like Nintendo tried to turn the satisfying plink and pop of gathering coins into a sleight of hand trick to disguise the fact they probably designed all of the game’s levels in a single lunch break.

It is, of course, all perfectly okay – we’re not talking about Sonic the Hedgehog levels of failure here. There’s plenty of life in Mario’s world, even if it’s all been regurgitated to the point where I’m clearing most levels using muscle memory alone. The little guy’s charming buoyancy is still the best in the business, so I still had a fairly decent time going through the motions across the game’s 80-odd levels. There’s also an occasional spark of imagination and creativity, although Nintendo doesn’t want me making those moments explicit. But when the best new feature in over 80 levels is a giant Boo who creeps forward even when you’re looking straight at him, well, that’s when you’re probably running into some severe creative difficulties. There’s also two player co-op, but I’ve never really been partial to Mario’s co-op endeavours.

The real kicker is in the secret levels. They’re just not exciting. Usually in a Mario game these are playgrounds for Nintendo’s creative designers to run unhindered, twisting the game’s core elements and throwing up exciting new challenges that lovingly tickle your brain – these are the moments where Mario Galaxy 2 and Super Mario 3D Land ascended to greatness, and it’s here where New Super Mario Bros. 2 stumbles and falls.

New Super Mario Bros. 2 just doesn’t crackle and pop with the creativity – that potent Nintendo magic – of its other many contemporaries, and Nintendo has thrown together a Mario-by-numbers experience that’s often fun to play but unforgivably formulaic. There’s plenty of unmemorable fun to be had here, but it’s shocking how it only took three goes for Nintendo to make New Super Mario Bros. feel old.

There's plenty of unmemorable fun to be had here, but it's shocking how it only took three goes for Nintendo to make New Super Mario Bros. feel old.
7 Mario makes me feel young Not very creative Not very challenging One million gold coin thing is utter nonsense