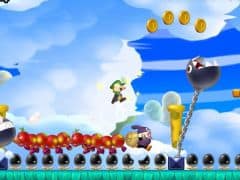 There was once a time when Luigi was nothing but a palette swap. In the last decade or so, however, he’s really stepped out of his brother’s shadow, thanks to the likes of the Paper Mario series and Luigi’s Mansion. If Mario is the Frasier of the pair, the cocksure, bold older brother, then Luigi is basically Niles, the skittish doubter, the one with all the hang-ups and neuroses. While Mario jumps gaily through Haunted Houses with nary a care in the world, Luigi whimpers and fearfully hums his own theme music when exploring them.

He’s a bit of a wreck, and judging from New Super Luigi U it’s hard to blame him. Nintendo’s first major DLC release, it offers 80 odd new (although strictly, they’re remixed) levels to Super Mario Bros U for you to rattle and curse your way through as Luigi. It would have been nice if there were a few new stages or backdrops, but the remixes are still fresh enough to justify interest.

The base game was already the hardest Mario title in ages, and New Super Luigi U is even more punishing. Remember how ‘You Will Die’ was Dark Souls’ statement of intent? New Super Luigi U’s the same, it’s just Satoru Iwata’s saying it so it’s a lot cuddlier. You will die though. Repeatedly. You can negate some of the difficulty by choosing to play as Nabbit, who’s invincible to enemies, but even so, there’s no beating gravity. Or lava. Besides, Nabbit-using is a cop out and should only be used by the weak-willed. Or people that have deadlines.

It starts off like any Mario title, except Mario’s not there. Peach, Luigi and a couple of Toads are having tea, with the only trace of Mario being his hat (so maybe he’s gone out for a cigarette or something. Peach probably doesn’t like people smoking in her castle). Of course, Bowser and the reptilian menace come a-knocking, kidnapping Peach and kicking Luigi and company out. Now it’s Luigi’s turn to save the day. Yay?

Luigi plays differently from his brother. Whilst Mario is relatively easy to keep a grasp on and control, Luigi has a few problems applying the brakes, meaning stopping isn’t the best idea sometimes, lest you skid straight into the, er, arms of a waiting goomba. To compensate for this, though, he has a higher jump, and he can hang in the air for a bit too, wiggling his leg desperately to maintain his momentum.

Luigi’s different play style lends itself to rattling through levels pretty quickly, a fact bolstered by the greatly-reduced time limit on each level. You only have 100 seconds, and while that’s more than enough time to complete each of the new courses and adds an urgent new dynamic to the experience, it doesn’t lend itself well to searching for star coins or exploring for secrets, which is off-putting. The ‘time’s running out’ music that plays at the start of each remixed course sort of cajoles you into thinking ‘bugger, better get my skates on.’

It should take less time to get through, but so merciless is New Super Luigi U, that it will have you repeating levels. A lot. You will drop lives everywhere, whether it’s through some devious enemy placement, a sneaky pit or an environmental hazard. Because you’re forced to get a move on, there’s a tendency to try and blitz through the levels here, which leads to carelessness, and carelessness costs lives.

New Super Luigi U does subconsciously train you up while you play it, however, and death is often your own fault. Super Mario Bros U was a game to be replayed and mastered, and this is no different, so there are many hours of potential gameplay here. At its best, it still represents the work of some of the best developers in the world at the top of their game, and the sense of joy (and relief) every time you climb up a flagpole is arguably more palpable than in the main installment.

Is New Super Luigi U worth it then? Yes, I’d say so. It would have been nice to see more additions, perhaps a few new areas and some different bosses (all the boss fights are the same as in the parent title, which is disappointing), and an extra 50 seconds per level might not have hurt to have a dawdle for secret areas and star coins. Despite these caveats, it proves just how smart and ahead of the pack Nintendo are with level design and gameplay.

Proves just how smart and ahead of the pack Nintendo are with level design and gameplay.
8 Lots more of an already great game Luigi plays differently enough to change the dynamic of the game No new boss fights Some proper new stages rather than remixes would have been nice