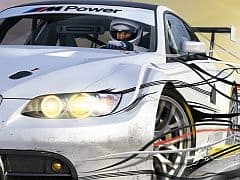 When EA announced that it would be giving its Need for Speed games more development time to ensure the series would become known for quality, the racing community clapped politely, but weren’t hysterical. Over the years the franchise has had far more critical flops than hits, with the arcade brilliance displayed in Most Wanted generally being overshadowed by the mediocrity of ProStreet and Undercover. So when the next NFS title was revealed as a sim racer, not an FMV laden open-world thrill ride, we were initially confused. Then we realised that developer Slightly Mad Studios is the team behind the superb GTR2, and then we played it. Things suddenly looked very positive for EA, until the release schedule revealed that DIRT 2, GT PSP, Forza 3 and GT5 were all due for release in the weeks surrounding Shift’s debut. Just how many racers does the average gamer have time for?

Let’s get the most important thing out the way first: Shift is easily the best NFS title in years, perhaps even the best ever. There’s no question that EA and Slightly Mad have created a game that will please millions of racing fans around the world and that this is a great new beginning for the franchise. If you want a serious racer, complete with some great cars and tracks, and the best in-car view outside of real life, look no further than Shift. On that front everyone involved should be congratulated and given a hearty pat on the back. But we’d still love to ask some serious questions about a few of the design choices.

Shift has a fairly traditional career structure. Events are split into four tiers, with a fifth – World Tour – being the Holy Grail that all Shift drivers aspire to compete in. Inside each tier is a series of events (race, time trial, head to head, endurance, eliminator and drift), each having a number of stars and cash up for grabs, as well as being an opportunity to earn points that go towards your overall driver rank. At first it’s all a tad confusing. Stars, earned for podium position, points earned and achieving set goals, go towards unlocking new events and tiers. You’ll move from tier one to two fairly quickly, but from then on you’ll need to perform well in lots of events in order to progress.

Points are earned in a way not too dissimilar to the Kudos system in the Project Gotham Racing series, although here they’re split between Precision and Aggression. Precision points are awarded for sticking to the racing line, drafting behind other drivers and taking corners well, while Aggression points are dished out for ramming opponents and forcing them off the road while you remain on the tarmac. It’s undoubtedly a system that has been designed to give each driver something of a blueprint of their own, but the Aggression points seem slightly at odds with the sim nature of the experience – you don’t see many professional drivers deliberately using their cars as weapons.

The career mode will keep you playing for some time, and getting a complete set of stars will take even longer, but it would all be for nothing if the actual driving wasn’t up to speed. When you first start the game you’ll be asked to drive a test lap in order for the game to determine your skill level – do well and it’ll be suggested that you drive with settings suited to an experienced racing game player, while a poor performance will mean the game will recommend a ton of assists. All these settings can be changed at any point, but the test lap (repeatable if you’re not happy with your result) is a very good starting point.

In terms of how driving feels, it’ll depend a lot on the assists you’ve got turned on, but in general we reckon Shift sits somewhere between the flash of Project Gotham Racing and complete seriousness of Gran Turismo. Complete hardcore sim fans may find that a little disappointing, but given the series’ arcade heritage this is still a massive departure and will be a huge change from the norm for anyone who has stuck to the NFS franchise down the years. Analogue stick controls take some getting used to, with the sensitivity likely requiring a tweak or two to feel right, but once you’ve got a setup you’re happy with the cars handle superbly well.

Considering how great the handling is the awkward drift events come as quite a shock. Instead of competing against other drivers for the best time or position on the track, drift is all about scoring points by sliding around corners while managing to keep some element of control. After some practice you’ll likely get the hang of it and not constantly spin wildly out of control, but these events simply don’t fit with the overall feel of the game and for many will be an annoyance to work through. Thankfully these events are dwarfed by proper racing, but we’d have preferred none at all.

When we first saw Shift it looked incredible, and we still think it looks great, but just not as impeccable as we initially thought. It’s not until you use the incredible cockpit view, so your vision is fairly limited, that things take off. Sat in the drivers seat, Shift becomes an altogether more thrilling and realistic experience. The sense of speed at times is scary, the head movement as you accelerate and brake puts you in the game like few others have ever managed, and crashes, complete with impact blur, only lack physical pain.

When played using an external camera, however, Shift is an OK game that looks pretty good. Look closer and further afield than the tarmac and blemishes start to appear – and at times the game look rather ugly. In terms of trackside detail Shift is sorely lacking when put up against recent racing hit DIRT 2, and the city tracks look relatively basic when compared to the now fairly old Project Gotham Racing 4. Car Damage is also a little disappointing, falling some way short of what we’ve come to expect in next-gen racers. Audio is as well done as you’d expect from an EA game, the soundtrack is trendy without being terrible, and there’s even a handy voice over man that explains anything new that crops up.

This being a Need for Speed game there are obviously plenty of options for car customisation, from buying new performance upgrades and applying your own designs (making your own graphics is possible by combining primitive shapes), to customising your rims and laying down some paint. Certain tuning options are locked until you’ve bought the required body kits or upgrades, but assuming you’ve spent the cash you’ll be able to adjust tyre pressure, tweak downforce and more.

Outside of the career mode there’s the usual quick race and time trail options, as well as online multiplayer for up to eight players. Our tests have been limited to a maximum of five other players on a closed private network, but performance was excellent. There’s nothing too remarkable about the online implementation, but with the driver points carrying through you’ll always be working towards the next driver rank and the unlocks that go with it. There’s some decent friend integration, with your buddies’ best times on tracks appearing throughout the career mode, but there’s just nothing here that stands out as anything wholly new. Thankfully the driver AI when you’re playing alone is up there with the best we’ve seen, so the online limitations are certainly forgivable.

Need For Speed: Shift is a brilliant new start for the franchise and has clearly been built by a team that loves racing. It’s got shortcomings, as you’d expect from a new entry in the genre (notably a fairly basic online offering and a catch all career mode), but the on-track action is worth the price tag. Shift comes highly recommended to all racing game fans, even if it may well end up serving as a stop gap release until console exclusive heavy hitters Forza 3 and GT5 turn up.

Need For Speed: Shift is a brilliant new start for the franchise and has clearly been built by a team that loves racing. Shift comes highly recommended to all racing game fans.
8 In-cockpit camera is superb Great sense of speed Trackside detail isn't great Precision and Aggression don't mix