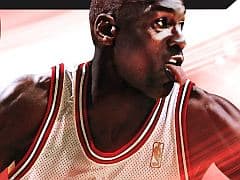 I’m not what you would call a fan of American sports. There’s just something that doesn’t gel inside my brain when I try to watch NFL, NBA or MLB, yet when I play NBA 2K11 the quality of the game still manages to shine through. The last NBA game I truly enjoyed was NBA Jam back on the Mega Drive, so the fact that I’d happily play 2K’s latest effort in my spare time should tell you all need to know. Just don’t expect a game with big heads and crazy leaping dunks. This is simulation all the way.

Firstly, for complete novices there’s an excellent practice mode that allows you to run through the multitude of moves available. Considering the game makes use of the face buttons, shoulders and analogue sticks to perform a variety of dribbles and shots, it’s essential to utilise this mode in order to understand why everyone except you is performing perfect slam-dunks and lay-ups.

With the controls sorted it’s onto the game proper, which has a huge bonus in the form of Michael Jordan. This is a guy so famous that he’s starred in an animated movie, has his own line of Nike footwear, and will probably be named by everyone on the planet if asked to think of a basketball player. For proper fans, though, the Michael Jordan game modes will prove to be the jewel in an already glittering crown of NBA goodness.

Initially you get a set of 10 challenges built around the great man’s prestigious career, spanning from his startling emergence in the mid ’80s through to his latter achievements. These are scenario-based, asking you to score a certain number of points, hit a set percentage of baskets from outside the 2-point zone and more. Finish all these and you’ll unlock yet another mode to play through.

On the court the game excels, feeling like a series that’s been refined over the years. Gameplay is fast, fluid and exciting, and there’s depth here for dedicated followers of the sport. What’s great about basketball as a video game is that you don’t really need to understand the ins and outs of every rule to have fun playing it, which can’t be said for the majority of American sports. It’s end-to-end stuff, right to the very final second of play.

With a career mode, exhibition matches, online play and the Michael Jordan features, there’s an awful lot here for your money, but a real highlight for NBA beginners is the NBA Blacktop mode – a series of mini-games that focus on dunks, three-point throws, one-on-ones and the like. The dunk challenge is the most fun, even going so far as letting you add obstacles to the court that your player can leap over mid dunk. This showcases the flashy side of the sport that casual onlookers are likely to find appealing.

NBA 2K11 is a seriously slick production, featuring superb presentation throughout, from the detailed characters models and fluent animations, to the pumping soundtrack and flashy menus. Experts may be able to find faults in the way players look and move, but from a casual perspective it’s one of the most believable-looking sports games on the market.

If you’re looking to broaden your horizons as far as sports video games go, but are usually wary of American sports being hard to get into, NBA 2K11 is well worth a gander. There’s an awful lot of depth to the action, but it’s also very easy to get into as long as you find the basic gameplay enjoyable. It helps that 2K’s latest is extremely well put together, and has the superb Jordan game modes to work through. Let’s face it: it’s unlikely you’re going to pick this up instead of FIFA 11, but as an alternative to play when football isn’t on your brain, this does the job very well indeed.

Let's face it: it's unlikely you're going to pick this up instead of FIFA 11, but as an alternative to play when football isn't on your brain, this does the job very well indeed.
8 Blacktop mini-games are great Michael Jordan modes are excellent Looks brilliant It's not football

NBA 2K11 is the latest installment in the best selling, and highest…

NBA 2K11 is the latest installment in the best selling, and highest…