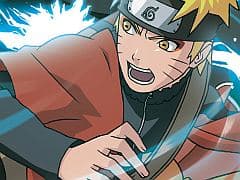 The Nine-tailed Fox is a force comparable to a natural disaster. A single swipe of one of its tails can flatten mountains and reduce entire towns to smouldering piles of rubble. This is the same power lurking inside Naruto Uzamaki, a zealous young ninja who had the beast sealed away inside him when he was a baby. Although this made him the outcast of Konoha village, the demon grants Naruto frightening powers which manifest themselves whenever the young ninja gets particularly riled up. This is the premise for an anime spanning 400-odd episodes and the most popular Manga series in the UK. Subsequently, there’s a huge audience for Ultimate Ninja Storm 2, and a lot of people – including myself – have particularly high hopes for the game.

The game picks up at the very start of the Shippuden series, as Naruto returns to Konoha village after several years of intense training with his master, Jiraya-sama. From here, the Shippuden storyline is split into three different chapters: one following Naruto, one his old pal Sasuke, and the last his perverted mentor Jiraya-sama. Despite the game’s firm groundings as a fighter, there’s a strong emphasis on story here, and Ultimate Ninja Storm 2 does a remarkable job of retelling the events that took the anime almost 200 episodes. While the fighting mechanics are the real meat of the experience, an RPG overworld gives all the violence some context. In addition to giving the story an opportunity to manifest itself, these village hubs allow Naruto to pick up missions, purchase items and indulge in conversation with the game’s colourful cast of characters.

After several training missions and trivial ‘filler’ quests, the main plotline kicks in and things start to get interesting. In a refreshing change of pace, the player is given control of Gaara, a villain-turned-ally who also happens to have a powerful demon trapped inside him. The overall story revolves around an organisation known as Akatsuki, which is after the power that resides in these demons. After losing in battle to one of their members, Gaara is kidnapped and hauled off to a remote location where his captors plan to extract that power. These are the robed miscreants that Naruto and chums will find themselves exchanging blows with over the course of the adventure.

I expressed concerns about a slightly one dimensional combat system in a recent preview, and unfortunately those problems still linger. Each special move can be executed with a simple hammering of the B button. Depending on the directional button you combine this with, a different move will be launched – and all of them will be familiar to fans of the anime. These combos are the staple ingredient of Naruto’s combat diet, and you’ll be using them a hell of a lot to down his foes. A more involving command system would have done wonders in improving the combat as a whole.

Of course there’s a certain strategy to be found in defence and evasion; skilled players will become well acquainted with the A button, which will launch Naruto about his environments and avoid enemy attacks. There’s also an infinite supply of kunai knives hiding in the cavernous depths of his ninja pouch, and these can be thrown with a tap of the X button. Despite being somewhat uninvolving, the combat system as whole is incredibly robust. An impressive selection of items mean the player can heal any wounds and bring more powerful spells into their game plan, and a partner system puts a second character on call for some tag-team ninja duelling.

Steal a glance at the screenshots that decorate this review. Pretty impressive, no? On first glance the game is indistinguishable from the anime, which is a small technical miracle. Developer CyberConnect2 has created something that is simply joyous to watch, even if you don’t have a clue what it is you’re looking at. It’s hard not to marvel at the spectacle of it all, especially during the impressive QTE sections that dissect the combat. During these frequent skits, players are prompted to press buttons as fast as their fingers will allow, as a scene of well-choreographed action unfolds on screen. The quicker you do this, the more stars you’ll earn – unlocking extra cutscenes from the anime and fleshing out the story at that particular point.

Even with the adventure side of the game over, the game still has plenty to give. With an online battle mode and over 40 characters to pit against one another, Naruto fans will still be playing this game months down the line. It’s a comprehensive title, and although changes from character to character are fairly trivial, there sheer size of the roster is sure to keep fans happy. There are even cameo characters thrown into the mix, like Akatsuki Sasuke, Hokage Naruto and Lars Alexandersson from Tekken. Yes, you read that last one correctly. It’s a strange crossover any way you look at it, but fans of the fighting genre will likely appreciate the sentiments.

The combat can be slightly uninvolving at times, and the exploration side of proceedings serves little more than to connect one battle to the next, but the experience as a whole is surprisingly enjoyable. The game does a fantastic job of recreating pivotal moments from the show, the authenticity enhanced with some truly second-to-none visuals. It’s one of those games that – while not all that deep – is incredibly satisfying to play, even for those that know nothing of the show. I won’t claim to have played all 30-odd Naruto games that are already out there, but I’d be willing to put cold hard cash on the fact that Ultimate Ninja Storm 2 is the best of the bunch. Believe it.

A fighting RPG hybrid based on the Shippuden period.

A fighting RPG hybrid based on the Shippuden period.