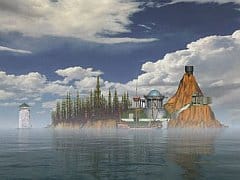 It is a testament to the rapid development of video game hardware that a title that was revolutionary to behold when it arrived on the Apple Mac some 14 years ago now looks fairly average on Nintendo’s tiny handheld. Myst DS is the latest remake of the classic 1993 puzzler that still courts confusion and excitement to this day. Since the original game’s launch there have been numerous versions, comics, novels, and even the recent MMO named Uru Live.

Myst still enjoys an enthusiastic cult following, thanks to an allure and appeal that is hard to resist, and fortunately that mystique has made the transition to the DS. Unfortunately, the irreverent style and confusing production that makes Myst so unique is by the same stroke its downfall. Its creepy theme and deliberately bewildering presentation will be hugely off putting to many who stumble upon this most confounding and captivating of adventure-puzzle games.

If you are looking for comparisons, parallels can be drawn with LucasArts’ point-and-click adventures, though this game has a far more sombre tone. The likes of Another Code on the DS and time travel escapade Shadow of Memories on the PS2 do bare a likeness. However, Myst DS really is quite distinct from other adventure games of the same ilk, and actually evokes a feel for the earliest text-based games and ‘Choose Your Own Adventure’ books.

You star as the protagonist, whisked off to an island at the centre of another dimension as you read the pages of a peculiar old book. Upon your arrival on the rocky outcrop, two things strike you immediately, that both define the game and defy high review scores. Firstly, there are no explicit clues about why you are there, what you must do, and how you should go about it.

Secondly, when you do set off to move about the game world, it quickly becomes apparent that rather than there being a 3D space to move through, you are simply faced with numerous static images, that you can move through like page of a book. Imagine if you will that you are facing a shed straight on from some distance. Tap the shed with the stylus and you will jump to a shot of the door. Tap the door and you jump to being inside the room. Tap to the far left and you are presented with another image, as if you have spun 90 degrees on the spot in an instant. There are occasional switches and dials you can interact with, but Myst is almost entirely a game without animation, and as you are usually alone, it is largely a game without characters.

At that point, anyone who isn’t going to like Myst will know it, and you can see why it might get bad review scores. With nothing obvious to do in a world built from paper-flat pictures of a near-empty island, it’s easy to discredit Myst. In essence, it’s a text adventure of old with pictures instead of words, but if you love a good mystery, and take some time to adjust to this most atypical of games, there are plenty of treats in store.

You see, as much as the mystery on the island, the game itself is the mystery. Discovering exactly what Myst is, is playing the game. If you’re a fan of whodunits, or even if you like assembling flatpack furniture without a manual, this could be for you, and if you fancy a game that challenges your finally honed familiarity with the norms of video games, Myst might have plenty to offer. Most of the puzzles, once discovered, are not dissimilar to the kind found in the likes of Hotel Dusk, but Myst definitely requires a little more thought, and absolutely has a great deal more atmosphere.

As you wander the island, leafing through old books and uncovering secret passageways and futuristic devices, the sense of being lost in an eerie, empty and misleading place can be quite overwhelming, and while it’s never scary, it is constantly disconcerting. There’s always a sense you’re being watched, and it’s hard not to suspect the game is laughing quietly at you. But again, it is the unease that Myst creates that will either put you off or rope you in.

The puzzles are always intelligently designed and never unfair, and the iconic Myst island is a wonderful place to explore. It is littered with objects that contradict and complement each other. Unsophisticated electricity pylons adorned with hieroglyph-like icons connect sheds and crude temples. A dumped spacecraft sits a stone’s throw from a sunken pirate ship. The island is pockmarked with curiosities and they are all well chosen. While there are no explicitly surreal touches, and nothing like optical illusions, it’s fair to say Salvador Dali and Escher have had an influence on the strange island from developer Cyan Worlds.

Not only is the plot impossible to detail without revealing spoilers; it is actually close to impossible to tell at all. By pouring through rather text heavy documents littered about the island you learn of several different time zones and dimensions, and a mysterious author who seems to create and inhabit several strange interpretations, or’ Ages’, of the island, and for now, that’s all you need to know. A new ‘Rime Age’ has been added to the game to give dedicated Myst fans something unfamiliar, but the game is certainly not without its faults.

Visually it is interesting, but all too often Myst lacks a certain polish, and while the static images system is surprisingly instinctive after some initial confusion, sadly the stylus input to hop from one view to another is sporadically unreliable. In the original, a crosshair would highlight important objects as it drifted over them, but sadly here it is missing, making trial and error an all too familiar process. The sound, while well matched to the game’s atmosphere, is terrible at times, and generally little more than ordinary in quality.

Overall, Myst is an unusual and unique game, and the DS should be grateful to be its host. However, it is also the kind of game many will find frustrating, dated, and confusing. Those who like Myst will love it, and those who do not will hate it. Its potential to amaze might be worth the gamble, but it is probably best left to players who enjoy the surreal, the off-key and the challenging.