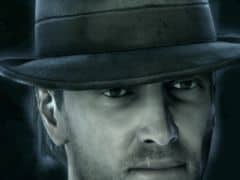 It’s a problem for every medium: whenever a plot takes on a complex idea, it often struggles to obey its own rules. Murdered is no exception.

I join Ronan O’Connor moments after his murder, watching as he struggles to come to terms with his death and learn the ways of the afterlife. We discover he can pass through (some) buildings and possess people in order to gain information. So far, so good: I empathise with Ronan’s confusion and am equally suspicious of the strange ghost girl who is telling him of his spectral powers.

Then, moments after struggling to open a door, Ronan exorcises a demon with consummate ease (via QTE), as if he’s been trained by Yvette Fielding in some off-screen montage.

Ignoring the storyline that’s both contradictory to the gameplay and also incredibly obvious, and bypassing the demons which are merely a boring mechanic to add a sense of peril to a game where the hero is already dead, the lack of investment in Ronan’s character leaves me ultimately distant from the game.

Ronan is stuck in limbo, and the only way to ‘cross the bridge’ and rejoin his also-deceased wife is to solve his own murder, via LA Noire-style investigations that rely on deduction and logic. The problem is the relationship with Ronan’s wife and her death is never explored in any meaningful way, except via collectible items littered throughout Salem. I either ignored them, or picked them up for the sake of it. The plot never drove me to give them a second glance.

The supporting cast are voiced well, though if they aren’t given a sufficient enough role the character design is reminiscent of Fahrenheit rather than a current-gen title.

Although the basic gameplay is serviceable, Murdered barely moves past standard point-and-click fare. It seems the core experience was centred on a plot that was shoddy to begin with, one which the developers failed to abide by during key moments, and the braindead investigations mean the six hours were littered with few enjoyable moments and far too many inconsistencies.

A B-movie plot wrapped around an F-rated game.
4 Decent voice-acting. Awful plot. Collectibles for their own sake. Demons are an unnecessary mechanic.