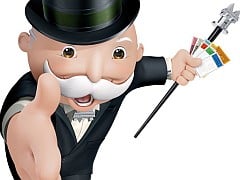 Monopoly is one of the most popular board games around, somehow managing to combine things most people aren’t too keen on (money management and buying property) into a fun pastime. It’s a brilliant game to play with friends or family and can last for hours – we’d go as far as to say it’s a required part of growing up. Nothing can beat a game where rules are bent, broken or completely ignored all for the sake of a few meaningless slips of fake paper money. For a game so tied to the round table experience, we’ve always been a little dubious of video game editions, so we approached EA’s attempt with more than a little scepticism.

If you’re somehow completely unaware of Monopoly (perhaps forgiveable if you’re under 16 and have always had video games to keep you away from board games), the gist is that you roll two dice and move a player marker (we always liked the dog the most, but the top hat is a firm second favourite) around a square board. Land on a property (which make up 22 of the 40 squares on the board) and you have the option to buy it; buy an entire street of properties of a single colour and you can buy a house; buy enough houses and you can build a hotel – all the while increasing the fee other players need to pay you should they land on a square you own.

Add in three Chance spaces, three Community Chest spaces, a Super Tax space, an Income Tax space, four train stations, two amenity suppliers and the four corner squares (GO, Jail, Free Parking, and Go to Jail) and you’ve got a game that is never dull. Played with friends it’s possible to have epic games where alliances are formed, dodgy deals are made, backs are stabbed and the victor isn’t known for sure until the other players are all bankrupt. The problem with virtual Monopoly is that these underhand deals are almost impossible to account for.

EA’s virtual game has the basic rules down and allows you to tweak them to a degree, making it more than good enough for a simple game among players who don’t care about stretching sportsmanship to its limits. Deals can be made between players, with offers of properties and cash able to be made. You can even auction off properties to the highest bidder. The game works as you’d expect, and the game obviously handles all the money, player movement and properties – there’s no chance someone will get up and accidentally knee the board, causing al the houses to fall on the floor, accidentally on purpose.

Aside from the original version of the game there’s the option to play the Get Rich Quick Edition, which has been designed for quick play. This uses mini-games in an attempt to simplify gameplay, with players choosing cards based on the throw of four dice. We found this to be hard to get into, hard to explain to our gathered non-gaming family members and generally not as much fun as the traditional version. More successful is the inclusion of a number of board variants that don’t actually change the rules (including the MONOPOLY HERE & NOW: The World Edition).

Being a board game there’s not a great deal to be done with the presentation, but EA has managed to inject some character and production values. In what is a nice touch in the Wii version, your Wii Remote speaker will play the sound of your character (a bark if you’re a dog, for example) when it’s your turn. Something we weren’t so keen on is the cluttered on-screen interface when you had to perform certain tasks, such as negotiating a trade – even the Wii version, a console designed for SD television sets was hard to read on a fairly standard sized non-HD set.

Although online play wasn’t really expected in the Wii and PS2 versions of the game, we did expect at least a rudimentary online mode in the Xbox 360 and PS3 versions, especially as those versions retail at £10 more than the others. You get sharper visuals, but you lose the motion control in the mini-games found in the Wii game. Maybe EA didn’t think the audience for Monopoly is into online gaming, but it still seems like a missed opportunity.

EA has managed to produce a competent virtual version of the classic board game, but we still can’t recommend it over buying the real thing. You get numerous boards and the questionable Get Rich Quick mode, but you lose so much by not being able to play the way you want. If the idea of playing a board game seems too last century this virtual edition might be worth a look, but be aware that this is only ever going to be second best.

If the idea of playing a board game seems too last century this virtual edition might be worth a look, but be aware that this is only ever going to be second best.
6 Plays a good game of Monopoly Nicely presented Not so easy to play with unorthodox rules Some menus are cluttered and hard to read