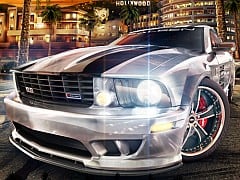 If there’s something Rockstar does better than everyone else, it’s creating believable virtual cities. GTA 4 felt more alive than any open-word game to date, so it’s no surprise to find Rockstar San Diego’s Midnight Club L.A. excelling in this area too. Burnout Paradise may have nailed the aggressive arcade racing genre, but Rockstar’s street racer is an altogether more immersive experience. It might not be an exact replica of L.A. but it certainly feels like a real city.

Midnight Club L.A. casts you as a newcomer to the illegal L.A. street racing scene. You turn up without much money and with no friends, so you need to make a name for yourself. It’s not going to be easy (far from it in fact), especially considering the old, rather slow cars you initially get to pick from. It doesn’t matter though. From the moment you pull out of a small car park and head towards your first race, you feel a connection to the tarmac that too few games get right. No matter what you’re driving you’re going to have a good time.

Although it’s got an open city complete with pedestrians walking the streets, Midnight Club isn’t GTA. With only racing to work with Rockstar had to make sure there’s enough variety to ensure boredom won’t set in, and this has been done admirably. Race types come in many forms, from single races through a set of checkpoints, lap races, pink slip races (win or lose a car) and traffic light runs, to multi-race events that take a serious investment of time. Whichever you end up doing, it’s simply a case of cruising up to other cars with an icon above them and flashing your lights. You can even race them to the starting line, or double flash to instantly teleport there.

Your goals are simple: earn reputation points, earn money, upgrade your vehicles and buy better ones. It’s not exactly deep story stuff, but the lure to keep playing is strong. You know full well that super-powered racing beasts are on offer if you’re good enough, and the prospect of screaming around L.A. with this driving model is impossible to resist. Fun pours from every hair-raising corner, highway near miss and insane speed boost. Doing it in a clapped out Volkswagen Golf is one thing, doing it in a scary looking nitrous eating speed machine is another thing entirely.

You’ll buy and upgrade your vehicles at a garage, with options to tinker with things yourself or let the game decide what’s best. With numerous upgrades with various upgrade levels, as well as visual enhancements, you can spend a long time making the very best vehicle possible or simply press a few buttons and be done with it – and thankfully the game lets you make some running repairs while out in the city.

City driving in real life isn’t easy – as many of you will know all too well. And it’s the same for Midnight Club L.A., which features the most realistic depiction of traffic we’ve ever seen, with quiet patches, stretches of congestion and freeways where the cars move fast. So how exactly is this fun? Simple really. Weaving in and out of traffic as you’re travelling at speeds of 100 mph or more, clipping cars and walls in a blur, and pushing opponents into barriers is what arcade racers should be about. Thankfully the roads aren’t as congested as they probably are in real life, but the illusion is there with enough room for manoeuvre to be great fun.

You’d be forgiven for thinking that Midnight Club: LA is all fun, fun, fun, but it’s not without problems. We know a certain group of hardcore gamers want games to punish them at every opportunity, testing their gaming prowess and humiliating anyone who isn’t born with reactions quicker than the Karate Kid’s Mr Miyagi, but for normal people extreme difficulty can be a turn off. Right from the off you’ll be struggling for wins in Rockstar’s L.A. with rival racers on your tail ready to take advantage of any slight slip up. Thankfully you can retry races without having to drive back to the start point, but there’s still a sense that the early going isn’t as forgiving as we’d have liked.

Things don’t get any easier of course, with longer multi-race events often stretching into 30 minute or more territory, making a loss even harder to take. You do earn rep and money even if you don’t win, but at times the lack of victories starts to grate. This is a video game after all. It’s fine cruising around town, but you also want to be made to feel like a racing god, not a guy who randomly felt like challenging a rude boy at a set of traffic lights, not knowing that your old banger takes six seconds to get out of first gear – let alone reach 60 mph. It’s not an insurmountable problem, but it is going to put off gamers who might have expected an easier ride.

Special abilities (ploughing through vehicles, slowed time, repelling traffic and electronics disruption) help you out, and are fun to use, but it’s still incredibly hard to build up a lead in a race that can’t be wiped out with a bad corner or head-on collision with an on-coming driver. Driving a bike actually makes things a little easier, as they can nip about between vehicles more easily and corner better, but the downside is that they don’t handle crashes all that well.

Cop chases are always good fun in games, so it’s great to see them in Midnight Club L.A. If you’re seen breaking the speed limit or driving dangerously then you can more or less guarantee that cop cars will be on your case. You can be a good boy and pull over, paying your fine, or you can pull over, wait for the cop to walk over and then speed off (complete with Police Camera Action camera angle). A high speed pursuit ensues, and you’ll need to drive exceedingly well to give the fuzz the slip.

Something that Rockstar has managed to do is avoid navigation problems. It’s hard to pin down why this is the case, but the city is just easy to get around. Whereas in Criterion’s Burnout Paradise you’d frequently miss vital turns, that rarely happens in Midnight Club. As you start to take part in harder races the checkpoints become more spaced out and keeping track of where you’re going via the on-screen mini-map becomes trickier, but it’s still more than doable.

Online play has been integrated in a similar way to how Rockstar handled it in GTA 4. There’s no separate menu for online, with everything accessed while you’re in the game. When online the busy streets are stripped of cars, but there’s still plenty of fun to be had racing against other petrol heads. The integration with Rockstar’s Social Club community site is also rather excellent, if you’re into that kind of thing, making this one of the best online racers around.

As fun as Midnight Club L.A. is, it wouldn’t be nearly as impressive if it weren’t for the incredible visuals on display. Using the same engine that powered GTA 4 it should be no surprise that everything looks rather wonderful, and after playing some other open world games recently it’s still hard to understand how Rockstar is so far ahead of the competition. The lighting is spot on, the weather effects are phenomenal and the frame rate rarely misses a beat. Combine this with a typically hip Rockstar soundtrack and you’ve got one of the slickest games you’ll see this year.

The open-city racer has some pretty impressive games competing for your cash at the moment. Burnout Paradise is offering a seemingly endless stream of new content to play around with in its action-packed fictional city, whereas Midnight Club L.A. is slicker, better designed and gives a more real sense of being in a crowded city. We’re happy to play both, and we recommend you do the same.

Midnight Club L.A. is slick, well designed and gives a more real sense of being in a crowded city. Even with Burnout Paradise on the market, you shouldn't miss Rockstar's latest.
9 Stunning visuals Great driving model Tonnes of fun Can be very punishing