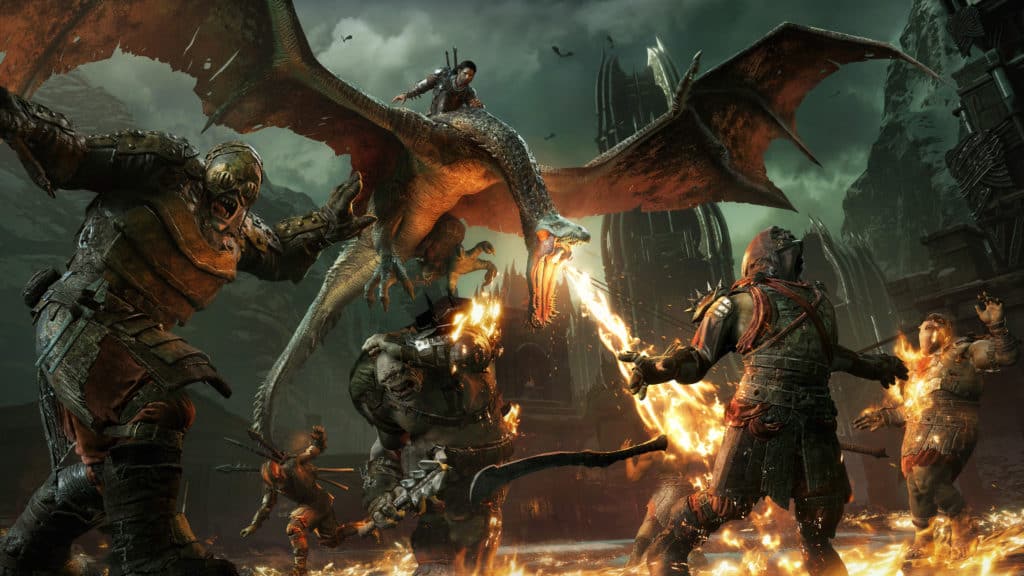 When someone goes on Dragon’s Den, clutching a sheet of five year projections in one sweaty hand and a ukulele to make the presentation ‘fun’ in the other, the one thing they definitely do need is a USP. You’ve got to have your unique selling point, or Deborah Meaden will do that wide-eyed look of furious incredulity and give you the heave-ho. Middle-earth: Shadow of Mordor’s USP was the Nemesis System, and Shadow of War has dialed up the Nemesis System as much as it can. This one goes to eleven, baby.

It’s a great credit to the team that after 30 hours, the system was still throwing up things that surprised me. Orcs can ambush you, betray each other, form blood brother bonds, and get really really mad that you set them on fire that one time, and, like honestly, it wasn’t even that big a deal so I don’t know why he can’t just move on?

This time around you’re forming your own army, so you get your own captains (all of whom have an accent from the following regional options: New Zealand, Australia, Austria, London Cockney, or, occasionally, Yorkshire). They can get annoyed with you, and will occasionally switch back to the other side if you do something bad enough like killing their best mate. But they can also turn up in the nick of time to save your life, or act as your bodyguard. The process of generating said orcs is also better this time. I only started to see repeat names near the end of my playthrough, but was still seeing new ones then. There are more interesting personality traits, combined with strengths and weaknesses, and the different tribes, too, to create an astounding number of combinations. It makes you feel like you’re having a deeply personal experience, even if you’re not.

Tied in to this are the new Fortress Assaults, which are what they say on the tin: assault a fortress and win it to take control of a region, turfing the enemy out and setting up your own boys in there. Each fortress has an Overlord, and the tribe he belongs to will change the style of the fortress — someone from the Feral Tribe is likely to have a bunch of caragors kicking around, for example. Then there are his Warchiefs, who’ll each bolster the defenses, adding things like stone walls, flaming archers and siege beasts, which you have to compensate for with your attack force: if a fortress has spiked walls your army can’t climb them, but sappers can blow through the walls altogether. Once you’re in, it’s a control point job: capture various areas and push through, until you end up in a fight with the Overlord himself. You then choose your own Overlord, who will rebuild the fortress in their own image. I usually go with an orc from the Marauder tribe if possible, because they cover everything with gold plate and it’s hilarious.

Fortress Assaults can be made substantially easier if you put in some time beforehand, drawing out the Warchiefs to kill or convert them and weakening the defenses. If you get all of them it’s pretty much a one and done job, but that makes it kind of less fun. There are also less fortresses in the actual game than you’d imagine, which is probably why you can do online assaults against other real-world players’ fortresses. They won’t boot up their campaign to find they’ve lost a region, but you’ll get some rewards for winning the battle, or they will if you were successfully repelled (usually because they’ve been a cleverclogs with their choice of Overlord), which is why you should think carefully about how you staff your fortresses.

This is also where the microtransactions and loot boxes full of orcs come in. You can buy the better loot boxes with real life money, or use some of the in-game currency to get the less good ones. It makes it easier to build up your own side, but the in-game currency racks up really quickly, and I didn’t use even the regular loot boxes unless I was in a hurry to take a region, so the core game does seem to be balanced to play without them.

The game world is substantially larger than before, with underground tunnels and snowy mountain tops. It feels, dare I say it, a little more alive, although it’s pretty funny when you’re told that you’re going into an epic story fight where two huge armies clash, and the game has to represent this in waves of about 20 orcs at a time because having actual hundreds would be a strain for your Xbox One.

Talion’s combat skills are now much more customisable. Captains drop gear with different abilities that you can grind for if you like, and each unlockable skill now has three unlockable sub skills to it, although you can only have one active at a time. Together it all means you can tailor your attack on a captain to his particular weaknesses. If he’s sickly, for example, you can use your Might to unleash an arrow with a poison blast, or if he’s terrified by burning you might equip a sword that has a chance to inflict fire on your target.

Sadly the camera is still your worst enemy at times, occasionally clipping behind an awkwardly placed hedge just when Talion has to dust off a QTE to not die, or swinging around wildly and changing which orc you’re aimed at without you realising, but you can usually keep the chained, bouncing, Arkham-style hits going without breaking your stride, in a kind of ‘I totally meant to do that!’ way.

Even though the orcs get gamely into the spirit of things, Talion himself is still a bit dour and serious, possibly because his entire family is still dead, possibly because he is still unable to join them, and probably because an uptight elf ghost is still piggybacking around inside him. Despite some interesting takes on Lord of the Rings lore, the story is very strangely paced. You don’t properly get to the army-building until after the first act, which can take a while if you don’t blast through the story stuff quickly. There are some separate quest threads including Bruz the Chopper (which actually becomes quite harrowing), and a Welsh nature spirit being angry at a Balrog, and then a wholly unexpected bit after the second act. Then there’s the fact that Shelob, the giant evil spider, appears to Talion as a mystical and unaccountably sexy lady oracle. I found their interactions deeply, deeply hilarious, because whenever she stroked his face and whispered in his ear I couldn’t stop imagining it cutting to a wide shot showing Talion dwarfed by a softly chittering monster.

But these issues are dwarfed in turn by how well the Nemesis System works. I was doing a fortress when a lad with the moniker ‘the Poet’ turned up and started walloping me with a lute that had an axe blade stuck in it. One orc got weirdly obsessed with my Talion, specifically how beautiful he’d look as a corpse, and I immediately made the decision to kill him outright rather than have him in my own army. In Nurn, I was repeatedly saved from death by the same sharpshooter, who found himself catapulted up to fortress Overlord as soon as we conquered the region. It’s a really ridiculous amount of fun.

Available on: PS4, PC, Xbox One (reviewed on)