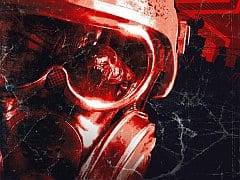 At points Metro 2033’s best qualities combine to produce stunning results, giving gamers some of the tensest and atmospheric sequences this generation of hardware has seen. But these moments are all too rare and the core combat feels clumsy to the point that it has a negative impact on the overall experience. While not the survival horror FPS classic it could have been, the mutant-filled disused underground tunnels of the Russian Metro system are still well worth visiting.

In 2013 the world is left devastated, with most of mankind annihilated and those who remain forced underground to escape the poisonous gas that fills the desolate wasteland. 20 years later, in Russia, mutants roam the land and colonies of humans have formed at underground Metro stations. You play as Artyom, a man born just before the apocalypse, but raised at the Exhibition underground station. After a new psychic menace is discovered, Artyom takes it upon himself to travel to the Metro’s main station, Polis, to warn the inhabitants of the Dark Ones. There’s more to it than this, but it’s still a surprisingly simple tale – one that no doubt is nowhere near as complex as that told the novel it’s based on.

This setup is perfect for some dark, creepy, atmospheric mutant blasting, and at times Metro 2033 delivers just that. 4A Games has created a game that’s stunning – in places – and this is Metro’s defining feature. The subdued lighting, great smoke effects and brilliant use of sound combine to make some truly terrifying moments. Part survival horror, part FPS, Metro is incredibly stingy when it comes to ammo, so your encounters with enemies (both hostile humans and mutants) are nervy affairs. You don’t want to go in guns blazing, but at times it seems like the only option.

While this might sound good (and it is to a degree), the ammo shortages will frustrate many. You could argue that a lack of supplies makes every encounter tenser than they would have otherwise been, but the stealth system here is awkward, resulting in too many forced combat situations. Stock ammo, created by the inhabitants of the Metro system, is rubbish, but the good military grade stuff is so rare it’s used as a currency to buy new kit. The problem is, when you’re fending off waves of spawning enemies, saving these precious bullets goes out of the window in favour of just surviving.

Looting is the name of the day here. You need to search every body, every discarded gun, every open crate and all the supply cupboards to get your hands on ammo, med kits and oxygen masks. Going into gas-filled areas or into the outside requires you wear a mask, but these run out of oxygen and crack when struck by enemies. Too much exposure to the poisonous gas results in death, so it pays to have a few replacement canisters in your inventory. Perhaps due to the lack of exploration, this mechanic doesn’t play as big a part as you might think. I died only once due to lack of air during my play through of the campaign, and because of this these sections don’t add anything substantial to the game – it’s essentially just the normal gameplay with a gas-mask graphical effect overlaid.

Things aren’t helped by some imprecise combat. Fair enough, the standard ammo isn’t up to much, but a shotgun blast to the face should send a human to the grave. At times mutants seem like bullet sponges, often not even reacting to being hit. Certain sections of the game end up with you circling round these beasts, getting off a shot and then circling round to their back again. It looks comical and is completely at odds with the game’s gritty atmosphere. Human enemies show more sense than the mutants, but even they run around like headless chickens at times, seemingly unsure about whether to attack or take cover.

Metro is a completely linear experience, which isn’t a bad thing (some of the best games of recent times are the same), but the level structure breaks things up far too much. You’re essentially working your way through the Metro system, which involves fighting through a linear level on foot, before reaching a new station and then hopping on a rail kart to the next area. Stations appear like hubs, and allow you to buy new items, but that’s all you can do at these locations. Loading screens crop up too frequently and remove the sense that you’re in a real world. You might be about to walk up some stairs, to finally get to the outside world, then a load screen will kick in and you’ll be teleported to the top. The linearity isn’t a problem, but constantly being taken out of the experience hurts the game. Even if 4A had managed to remove half the loading screens Metro would have felt more immersive as a result.

Sometimes Metro’s pace verges on boring, such is the attempt to build up tension. At other times fire-fights kick off that the game mechanics just aren’t suited for, resulting in some frustrating gameplay in which you’re overwhelmed by enemies. There’s also a lack of truly memorable sequences, with the game’s conclusion the standout section, being more unique and artistically creative than what went before it. At points the game takes its cues from the in-game cinematic sequences seen in the Half-Life series, but comes some way short of replicating them.

All of this might sound harsh, but even with these issues Metro is a fun, albeit terrifying game to play. The story is intriguing, the atmosphere is dripping with fear, the presentation reaches impressive levels, and you’ll certainly have the drive to see the campaign through to its conclusion – and perhaps again to see the alternate ending. The game includes a few obvious choices to make, but these alone don’t determine which conclusion you’ll get.

Built on 4A’s proprietary 4A Engine, Metro certainly looks the part, although the technical brilliance doesn’t come together with the artistic design as well as I’d have liked. Certain scenes, viewed from specific positions, make the game look as good as anything I’ve seen on the Xbox 360 (version tested). The game isn’t like this throughout though, with some less than stellar animations being the weak link. Animation blending is a big deal these days, and Metro suffers from characters and mutants who jerk from one movement into another. It’s not terrible, but certainly jars against the brilliance seen elsewhere.

Outdoors, the game also suffers from a lack of detail, where the daylight reveals a roughness not present when wandering the torch-lit tunnels. We game journos brandish the term “polish” a lot, but Metro 2033 lacks it. There’s no doubt that 4A is technically up there with the best, but its game is missing that extra level of sheen that you’d associate with true triple-A products. Comparisons to Killzone 2 and Crysis, from a graphical point of view, at least on 360, are way off the mark. On PC, with all graphical bells and whistles turned on, it’s another story. But overall, it’s still a little rough around the edges.

When Metro’s credits rolled, and as I looked across a vast landscape to see the results of my actions, I couldn’t help but feel a tinge of disappointment, partly because it was over, but mainly because there is such obvious room for improvement. Metro 2033 comes recommended, but falls a little short of claiming a place among the genre’s elite.

While not the survival horror FPS classic it could have been, the mutant-filled disused underground tunnels of the Russian Metro system are still well worth visiting.
7 Great atmosphere Visually incredible at points Too linear and broken up AI and combat issues