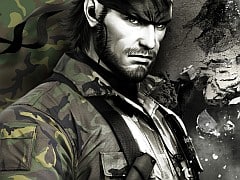 I’ve never read a Jane Austen novel. I’ve not watched The Maltese Falcon or Gone With the Wind, nor have I seen a single episode of The West Wing. And, while I’m confessing the gaps in my cultural CV, I’ve only just gotten around to playing Metal Gear Solid 3: Snake Eater.

This lack of prior exposure is precisely the reason I’ve been chosen to handle this review. With the recent release of the Metal Gear Solid HD Collection, we’ve already had one retrospective critique – so why not get a fresh of eyes to assess the whole shebang for the first time? Obviously the quality of the port also needs to be taken into account, so for comparative purposes I’ve also spent some time with last month’s high-def outing.

It’s quite strange coming to a game like this for the first time. Hideo Kojima has his detractors, especially when discussing Metal Gear Solid 4, but the broad consensus is that Snake Eater is something of a masterpiece, the strongest entry in a vintage series. It’s impossible to shrug off this reputation, as the case always is when you’re dealing with a classic. Part of you worries that you won’t like it, and that this will lead to bitter recrimination from your peers – eventually resulting in you moving to a tiny wooden shack on a cliff top somewhere, far from civilization. At the same time, another part of you actively hopes that the Emperor will show up without his clothes, just so you can knock him down to size. See? I knew it was rubbish all along! That’s why I never bothered with it.

As a result of this neurosis, a good portion of my early time with Snake Eater 3DS consisted of me obsessing over every fresh item, enemy and gameplay feature I came across – and what with this being Hideo Kojima’s work, there’s an awful lot to take in. The game doesn’t really begin until you’ve been playing for at least an hour, and in those first 60 minutes you’re showered with mechanics, gadgets and plot exposition. Ostensibly, your job is to guide Naked Snake through a Russian jungle so he can rescue a defecting scientist; in practical terms, your real objective is to learn how to survive.

There are patrolling guards to evade and subdue, but even this relatively familiar task is complicated by dozens of combat options in various lethal and non-lethal flavours. There’s a camouflage system that requires you to tweak your appearance every time the scenery changes. Aside from his health, Snake also has a separate stamina bar that must be topped up with food, which in turn must be gathered by hunting wild animals (which might attack you) or fruit (which probably won’t). Some of these improvised snacks can make you ill, and even the digestible stuff varies in its nutritional value. Among other things, Snake Eater 3D has taught me that hornets nests are super delicious – but since it also features a character who can turn bees into a kind of insect-based assault rifle (a bee-bee gun, perhaps?), I’m not sure how far I’d trust this claim.

By today’s standards the game doesn’t do a particularly stellar job of explaining all these bells and whistles, one of the few shortfalls that underscores its identity as a product of the last generation. Now we’re all used to being led by the nose through endless tutorials, and subsequently though challenges that escalate gently, only taxing us in their closing moments, if at all. Snake Eater largely leaves us to our own devices, and while there’s a spread of verbose NPCs who’ll happily dispense advice over Snake’s radio, these conversations often have Lucky Dip-like qualities: they might shed light on the problem at hand, but they’re just as likely to waffle on about something else entirely. The voice acting and characterisation is extremely well-done, but true to Kojima’s notoriety, conversations tend to drag on. In practical terms, your best bet is to get on with things – to play around until you work out how and why Snake might use a microphone in the middle of a Soviet jungle.

But if this sounds like a criticism, think again. To an extent, Snake Eater is the story of a cocky young pup who learns what truly makes a soldier – and that lesson is as applicable to you as it is to our gravelly protagonist. As I say, the opening hour is somewhat lacking in true thrills, but shortly after that the game evolves into something wonderful, in the sincerest sense of the word. From this point on you’re given increasingly free reign to approach your objectives as you wish. Do you want to play Snake as an angel of death – a nightmare who snipes lowly guards in the head, or blows them away with a point-blank shotgun blast? Or would you rather be a sneaky pacifist, putting your foes to sleep with tranquillisers? Destroying an ammo dump will make your foes wary, or you can starve them into a weakened state by blowing up their food supplies. If you’re really mean, you can even capture tarantulas and throw them in someone’s face.

Remarkably, this flexibility extends to the game’s boss battles. Again, I’d been primed to expect great things from these encounters. I’d heard so much about the sniper battle with The End, so many breathless plaudits, that when I finally get to meet the old bugger it felt like I was about to meet the Queen. Or assassinate her, perhaps. Either way, I was surprised by just how engaging these fights turned out to be. It’s not just the creativity of the set-ups involved, though that certainly contributes to their memorable nature; it’s also the fact that there’s usually a spread of ways to beat them. When confronted by The Fear – a tree-loving contortionist who hops about with a Predator-like cloak – you can choose to engage him head on, or lure him into a series of traps. Hell, you can even kill him with food poisoning, if you find the right approach.

And as outlandish as these characters seem with their freakshow demeanours, they ultimately fit within the universe. These X-Men rejects slot perfectly into Snake Eater’s blend of Cold War history, anti-nuke sentiment and pop culture musings, accompanied by the odd (slightly uncomfortable) moment of irrelevant smut. I’ve no idea how Kojima keeps track of it all, but it works. And beyond that, he succeeds in telling a good story – not just good in the “acceptable for a video game” sense, but a genuinely decent yarn. There’s a sense of cohesion here that surpasses the original Metal Gear Solid, the only previous entry in the series that I’ve played.

So, there we go. Everyone says Metal Gear Solid 3 is brilliant, and it turns out that I agree. Now I have to spoil the party slightly, because in all honesty, there are a couple of problems that have accompanied the game’s leap to the 3DS.

For starters, there’s the control issue. Snake Eater 3D offers a trio of options to use when aiming a weapon – first-person view, third-person, or a rather unreliable autolock – but regardless of what you plump for, it’s going to be fiddly. It’s not such a problem when you’re simply swinging the camera around, but when you’re trying to line up a headshot in the middle of a firefight, it’s a pest. There’s no way that the A/B/X/Y setup can replicate the smooth action of a stick, and as a result you often feel like you’re playing one of those maddening claw-and-cuddly-toy machines. In all fairness, the HD Collection forces you to manually aim with the left stick, and while this is certainly smoother, it’s arguably just as alienating.

The Circle Pad Pro can be used as an alternative, if you have it, but you’ll still need to deal with the fact that the D-Pad is used for things like reloading, climbing trees and changing your stance. If a genetic mishap left you with two left thumbs, this won’t be a problem; the rest of us will be unable to perform these actions while Snake is moving. It’s not a fatal flaw, but it is annoying.

On a more positive note, the lower 3DS screen makes itself useful by offering a convenient shortcut to your camo, mobile larder, and other vital menus. The 3D itself works rather well, dovetailing with the impeccable audio design to bring Konami’s jungle to life. I’m not going to write yet another earnest paragraph about how, actually, stereographics really give the action a sense of depth, because if I do that I might hurt myself. Just know that the 3D looks nice, so much so that you might play with it switched on for a change. It doesn’t even hurt your eyes. Much.

By far the most enjoyable addition is the option to make your own custom camouflage using photos you’ve snapped with the 3DS camera. This is absolutely as daft as it sounds, but it’s also remarkably useful. I’m not exactly sure what’s going on behind the scenes, but suffice to say I recommend that you try making patterns out of anything and everything. You’d think that an image of lush grass might be an effective choice for hiding in a forest, but no. On the other hand, when I tried using a mugshot of my (long-neglected, probably deceased) Nintendog puppy, Snake more or less turned invisible. I also get commendable results from the face of ex-VG staffer Jamin Smith.

Fun as this trick may be, I’m not sure it’s enough to make for a definitive version of the game. On a technical level the 3DS largely acquits itself well. The graphics are arguably more detailed than the HD Collection version, though they’re obviously crammed into a smaller screen. The base framerate is significantly lower on Nintendo’s handheld, and occasionally takes a hit during the action’s busier moments. I never found this to be particularly off-putting at the time, but the contrast was quite remarkable when I discovered that Xbox 360 edition runs at 60 FPS. Snake’s movements almost seemed too fast at first; if you’re approaching the comparison from the other direction, it may feel like he’s crawling through invisible caramel.

Beyond this, Metal Gear Solid doesn’t exactly lend itself to the episodic nature of handheld gaming in the first place. If you’re only playing on a 20-minute bus-ride to work, you might not even make it through an entire cutscene. Of course, you could argue that there’s nothing to stop you from playing the 3DS at length in the comfort of your own home. That’s also true, but if you’re going to do that, why not get the HD Collection instead? You’ll be able to pick it up for a similar price, and you’ll get two other games into the bargain.

Still, I must admit that I feel a bit harsh in saying that. The truth is that I’ve had an amazing time with Metal Gear Solid: Snake Eater 3D. If you’ve never fought with The End, eaten a rotting crab or climbed the tallest ladder in gaming, and if the 3DS is the only console you own, you really should acquire this game as soon as you can. When everyone said that you’d love it, they really weren’t lying.

If the 3DS is the only console you own, you really should acquire this game as soon as you can. When everyone said that you'd love it, they really weren't lying.
8 Incredibly fun and highly original Some of the best boss fights in gaming The HD Collection offers better value for money Framerate will annoy veterans