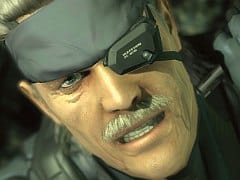 Metal Gear Solid is a big deal for a lot of people. Cinematic gaming probably wouldn’t be where it is today if Hideo Kojima and his team hadn’t brought us the original PlayStation game and for many the series stands way ahead of the pack. It’s been far from a smooth ride though. Awkward controls and a convoluted, often overacted story made the PlayStation 2 games an acquired taste. The question looming over the head of MGS4, then, isn’t if it’ll please hardcore fans (it unquestionably does) but if Kojima has seen where the series needed improving. The fact that this is the single best PS3 exclusive released to date should answer that question for you.

A huge part of the Metal Gear Solid series is its story. It’s often criticised for being too convoluted and told through excessive cut scenes, but for fans it’s a big deal. We won’t spoil anything here, but sleep easy knowing that Kojima delivers the goods and then some. Sure, at times the mixture of comedic elements, political comments and despair sit uneasily with one another, but familiar characters return, plot twists surprise and jaws hit the floor. It’s typical Kojima storytelling, for better or worse.

The voice acting is top class, the direction is brilliant and it’s not too difficult to follow the basic storyline. Some things are definitely hard to work out (I don’t believe for a second that I full understood exactly what was going on in every facet of the storyline), but it in no way hurt my enjoyment of the game. And yes, the cut scenes are at times exceedingly long, and no, you can’t save during the middle of them. This is one of MGS4’s most disappointing aspects. I can’t help but feel that with a harsher edit and a quicker pace the cut scenes could have been something really special. There’s also an abundance of lengthy codec conversations and quite dull explanations that really needed to be re-worked into entertaining cut scenes. These moments hurt the flow of the game, as do the unfortunate loading screens in the middle of intense sequences – forgivable only because they often look so spectacular.

One of the most significant changes to Metal Gear Solid 4 is the control system. I played a few hours of MGS3 the night before getting my hands on MGS4 and the changes make for a far more playable game. For many the stop and shoot gameplay felt rather dated by the time MGS3 arrived, with the rooted to the spot first-person viewpoint feeling incredibly restrictive. This has been completely changed in MGS4, which allows you to move and shoot from either a first or third-person point of view.

L1 brings up your targeting reticule in a third-person perspective and from here you can move and shoot, albeit slower than when moving without a weapon drawn. MGS4 features a GTA-style auto-aim system, but you’re able to disable this and use free-aiming if you wish. A tap on the triangle button while your weapon is drawn changes the action to a first-person perspective, giving you a more precise aim. You’re still rather limited as far as movement speed goes, but are no longer forced to stand still, which will come as a huge relief to many gamers.

Elsewhere much remains the same. There’s no jump button (which takes some getting used to) and L2 operates the item inventory while R2 handles weapons. As in previous games, these on-screen menus only show what’s been equipped from the pause menu and your slots are limited. The first 20 minutes or so will prove to be quite difficult to newcomers even with the changes to the control scheme. MGS4 still plays rather differently to your average action title so you’ll probably see the game over screen fairly frequently during the first act. You’ll settle into it though, learning how best to move through each environment and avoid the patrolling enemies.

Early on in the game Snake is given a tactical eyepiece which allows him to use a radar and view threatening soldiers. The game uses an ally system, where you can help out rebels in order to win favour and easier passage. Blue icons represent friends, while red represents enemies. If you’re seen to be taking out enemies you’ll be able to move through a level without facing an onslaught from both sides of the war. It’s easier said than done, as rebels will attack you if they don’t know who you are, but worth the effort.

To make the most of the game’s new-found gun prowess Snake has access to a black market gun retailer. Drebin appears early on in the game (along with his coke drinking, silver pant wearing monkey) and from that point on you’re able to trade any collected weapons for points, redeemable for new weapons and ammo. All the weapons dropped by soldiers in the game are hard coded to each soldier and Drebin is able to unlock them and offer you a selection of side arms, rifles, machine guns and heavy duty weapons. At no point in the game after I’d met Drebin did I have a shortage of ammo. It might be a tad unrealistic to enter a shop while in the middle of a battle, but it makes the game more enjoyable to play.

With stealth still being the core component of the game Snake has numerous tools at his disposal. These include a knife that can stun enemies, a tranquillizer gun, the MK II robot (ideal for scoping out areas while invisible) and a new OctoCamo suit that has chameleon-like properties. If Snake is still it will take on the appearance and texture of the surface it’s next too. This is good enough to fool the naked eye and infra-red sensors. Your level of cover is displayed in the upper right corner of the screen, so you’re always aware of how visible you are. During certain sections you’ll have access to additional disguises and camouflage items, including a few that have been included for nostalgic purposes.

Avoiding enemies has always been a core component of the Metal Gear Solid series and it remains so here. If you’re spotted the enemy will start actively pursuing you, so you need to get out of sight for long enough for the counter to count down to zero. If you’re spotted during this time it’ll hit 99 seconds again and you’ll have to start the evasion from scratch.

Enemies vary a lot throughout the game, coming in all shapes and sizes, from the standard soldiers to the half robot, half animal Gekkos that can crush you if you’re not careful. Bosses don’t disappoint either, with those on offer being some of the most creatively designed I’ve ever seen in a video game. You can’t simply shoot until their health bar is depleted either, with some thought required to pinpoint their weaknesses.

Once you’ve familiarised yourself with the nuances of the control scheme (which allows you to play the game in numerous ways – complete a level without killing anyone if you’re good enough) the opening two thirds of the game are full of superb moments and thrilling gameplay. Things change from here on, though, with cut scenes suddenly taking up the majority of your time and the actual gameplay sections feeling rather disconnected from one another. As the game turns more and more into a movie things start to drag, and by the end I found it hard to give the game my full attention. There’s no one cut scene that lasts too long, but at times they’re joined together in a way that feels rather self indulgent. A boss fight near the end may well impress MGS devotees, but as a climax it felt woefully inadequate for such an epic game – but in keeping with its direction.

Much has been said about MGS4’s visuals. From a technical point of view I wasn’t blown away as much as I expected to be, mainly down to some rough texture work here and there and a frame rate that doesn’t stay as smooth as I’d have liked. Despite this MGS4 easily competes with the best visuals consoles have produced, in no small part to the incredible design work in the game. MGS4 is a joy to play through, with some truly wonderful looking levels and enemy designs that quite frankly stand head and shoulders above what we see in most games. Cut scenes look incredible and for the most part offer some form of interactivity, but at times it’s a shame you’re having to watch some of the most action packed moments instead of playing in them.

When talking about the presentation the superb audio can’t be overlooked. The use of surrounds is incredible and voice over work on the whole is on a level above the best we’ve heard. Having said that, at times some less than spectacular acting lets down key dramatic moments. One scene towards the end of the game fell completely flat as the actor failed to convey the emotion required. It’s a small complaint in the grand scheme of things but one that stands out due to the cinematic feel.

Also included with MGS4 is Metal Gear Online, a team-based multiplayer game that will be expanded in the months to come. At the moment it’s a great alternative to MGS4’s single-player mode, although by no means for everyone. If you’re expecting a standard online shooter, think again, or rather think again while re-spawning as you’ll be shot dead rather quickly. By far the star of the online show is a sneaking game mode in which one player is Snake, another is the MK II and the rest are trying to hunt him down. This makes for some thrilling hunter/hunted gameplay, with superb support options available to the MK II player – invisible electrocution is always fun. With a selection of other team-based modes and plenty of players on the servers, MGO should have quite a future. It is worth noting that only one character is allowed per console. If a second player requires their own character it’ll cost you money.

Metal Gear Solid 4 had a lot to live up to and it’s done so brilliantly. It’s a game that will go down in history as one of the most ambitious and cinematic ever made, but also, finally, and more importantly, it will go down as a MGS game with gameplay that doesn’t polarise opinion. It’s not without it problems, most notably in the change of pace in the last third and the often laborious cut scenes (if you could play even half of the best cinematic moments MGS4 would wipe the floor with the best games we’ve ever seen), but MGS fans won’t care. Although unquestionably a game everyone should play, when you’re forced to take the back seat the blurred line between a game and movie prevents MGS4 from being the 10/10 masterpiece we hoped it would be.

Metal Gear Solid 4 had a lot to live up to and it's done so brilliantly. It will go down in history as one of the most ambitious and cinematic ever made.
9 Refined controls Awesome audio Stunning presentation Some cut scenes drag