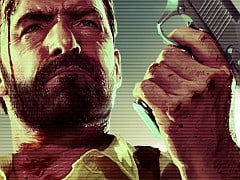 I shot some in the head. I shot some in the legs. I even nipped a few in the arm again and again with a rifle – until they snuffed it from sheer arm abuse. Oh, and these two other guys? I dropped a bus on them, and then blew it up.

The unifying factor of all these untimely demises was Max Payne looking fundamentally awesome. Whether I’d hurled him left, right or backwards down a flight of stairs – when he takes out bad guys Payne cuts a shape that can take your breath away. The animation, the detail of the gun-fight locations and the oil slick of visual and aural swank poured into Max Payne 3 is quite phenomenal. Besides, you really can’t help but have respect for a man who can reload in mid-air.

Beneath the cinematic Rockstar gravitas, however, Max Payne 3 is a somewhat old-fashioned beast. It’s a relentless and punishing bullet-chewer with an old school health pack system, and is entirely bereft of today’s newfangled rolling XP bonuses and streams of unlocks. Max begins and ends the game with the self-same powers of slo-mo and shoot-dodge, relying on your headshot hunger and a somewhat slow-burning plot to urge you on.

The essential fabric of Max Payne 3 combat is meaty and engaging, and seeing as the game entire relies on aiming and shooting, that’s something of a win. You’ll dive down the steep steps of a football stadium peppering oncoming armoured goons with Uzi fire, and you’ll snipe them as they dash around the roof of a skyscraper nightclub – and it’ll all feel rather marvellous. When those kills finish off with bullet-cam and a face wound, or neatly slink into FMV action that’s framed with tropes from all the best action movies (a helicopter tumbling overhead from The Rock, Max swimming beneath a burning curtain of oil as Arnie does in True Lies) that satisfaction is doubled down.

There is, however, occasional bullet malaise. Max Payne 3 is a long and punishing game, and is often poorly checkpointed. Even when playing on the normal difficulty level with a soft-lock aim system, there are bottlenecks and moments of extreme frustration as Max dies again and again. Sometimes you’ll have to get through an area where you’re not so much living on your wits as your Groundhog Day-style recollection of exactly where each enemy will pop out of the scenery. If you’re getting killed a little too often the game will drip-feed you extra painkillers, but they’ll rarely numb this particular sore spot.

The real issue with this isn’t so much the frustration, however – it’s the impact it has on the way you play. In former Max Payne games your pleasure often came from choreographing your own action: you would do a death-defying leap and shotgun takedown simply because you knew it would look good. In Max Payne 3 the risk of death and restart is often too great. Why do something that makes you look and feel like an action hero, when holding back behind cover means you’re more likely to survive? The shame, then, is that the difficulty encourages over-cautious play.

Something else excised from the record, meanwhile, is the eccentricity that Remedy once laced throughout former Max Paynes. In the last game dream moments and that remarkable non-combat sequence in Mona’s funhouse provided natural and fascinating breaks from the action, but the Rockstar blend prefers to concentrate on all-action, all-the-time.

Replacing that very European streak of nonsense, however, is Rockstar’s increasingly familiar super-earnest approach to cut-scenes, character and cinematic chicanery. Remarkably, they pull it off. You only realise it halfway through the game, but when realisation dawns it’s stirring. They’ve made Max Payne a person, rather than an action-cipher. Max suddenly feels like less of a self-knowing cliché, and more like the desperate, forgetful and pill-popping alcoholic he truly is. If the first Max Payne games were a hymn to John Woo, we’re now very much in the territory of Michael Mann.

The story posits that Payne is working in private security for a wealthy and obnoxious Brazilian family – hired by a friend called Raul Passos after a reunion gunfight in a deadbeat New York bar. The tale then merrily skips back and forth along a timeline that revolves around kidnapping, drug deals, super-extreme scenes of rudeness in a brothel and (of course) Max both with hair and without. It’s only when Payne’s Max’s curly locks are removed, of course, that the final transmogrification into a modern-day Bruce Willis is complete.

It’s fair to say that at first you, and Max, find it hard to feel emotionally engaged with the crowded entourage of melts you’re expected to protect – but by the time you hit the third act the story has kicked into gear. It’s a narrative with a long fuse, but one made perfectly palatable by a superb script that moment-to-moment certainly tops Remedy’s creations. When Max laconically observed he had ‘the liver of a French goose’, I almost stood up to applaud.

Another triumph of the game is the successful integration of bullet-time into multiplayer. The way stockpiled slo-mo juice can be locally unleashed on anyone you have your eyes on, until they dive into cover, is really rather clever – and leads to some almighty conflagrations. There are peaks of hilarity in Max Payne 3 multiplayer (it’s certainly the most solid and engaging online game Rockstar has put out) but there’s almost always a lot of legwork to be trodden through. You’ll get to that memorable five-player face off, the wall of flame, two bodies hurling themselves through smashing windows and an impending rocket launcher strike – but there’ll be trudge and depressing insta-kills in the lead up.

The highlight of multiplayer is the semi-narrative automatic pick’n-mix approach of Gang Wars, which sees rival teams face off in different places and under different circumstances. Payne Killer is also rather special, offering the chance to become the uber-character of either Max or Passos and having the rest of the server communally hunt you down.

There are few ‘bursts’ that you can include in your loadout that can match the charms of bullet time (Intuition provides a UAV-style enemy pinpoint on the map, for example, and Paranoia messes with who’s flagged up as a target to your enemies) but overall Max Payne 3 multiplayer is as balanced as it is engaging. It’s unlikely to set the world on fire, but can still bathe you in enough explosive craziness to have you fondly remember it in years to come – just don’t expect it to topple Call of Duty or Battlefield any time soon.

So then, Max, how shall we score you? You’re not as good as Max Payne 2: The Fall of Max Payne, not by a long chalk. Then again, you bind fire-and-forget action with a compelling story in various lavish and interesting locations. When you position me on top of something that’s toppling, slow down time and let me pop off a row of headshots, you’re fantastic. When I’ve got one bottle of painkillers left, and it’s used up to give me a last chance shot at my almost-murderer – that’s almost absurdly rewarding.

On the other hand, the smoke and mirrors of the game’s polish, presentation and story only just covers the fact that you’re a one trick slow-mo pony. A pony that wants me dead most of the time, and always reverts me to wielding a pistol after cut-scenes. Which pisses me off.

Max, dearest of all my friends, you’ve got a few issues. I think that much is obvious. You’re still a game, however, that I’d recommend all my friends play. You’re the closest my console has come to making me feel like an action hero, and for that I’d almost certainly buy you yet another drink…

Max Payne 3 is the closest our consoles have come to making us feel like an action hero
8 Payne a deeper and more compelling character Engaging action in vibrant surroundings Multiplayer occasionally hits the right side of frenzy A punishing and relentless game. Frustration can lurk.