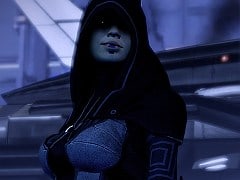 After completing Kasumi’s Stolen Memory, the first premium downloadable content released for incredible RPG/shooter Mass Effect 2, I thought to myself, ‘man, this would have been so much better if it had more cock’.

Forget the fact that it’s short (the loyalty mission won’t take you longer than an hour to finish), and the fact that Kasumi Goto, the sexy rogue-like party member the DLC introduces, is about as interesting as a tree stump. Instead, concentrate on this: there’s a moment when you’ll do a double take as you realise that developer BioWare has inexplicably left out perhaps the most famous “bit” of all.

I’m talking about Michelangelo’s David, which is beautifully rendered in-game as part of an impressive antique collection owned by an up-market gangster Shepard and Kasumi are trying to steal from. Now, the cultured among you will know the “arty farty” reasons for the sculpture’s masterpiece status. Me? All I know is David’s famous because it’s a statue of a man with his dong out.

It’s actually the high point of the DLC: when you finally get to infiltrate Hock (the big bad boss)’s personal collection of ancient artefacts, and you spot David standing proudly among other iconic pieces including Liberty’s head, sculptures of alien races (and one Easter egg for Dragon Age fans), it’s an undoubtedly cool moment. But you can’t help but feel that something’s missing, namely: David’s cock.

I suppose there’s a somewhat plausible explanation for David’s unfortunate castration. He’s missing an arm and a leg – evidence, perhaps, that in the years leading up to Mass Effect 2’s 2183 setting, David took a tumble and broke. But to me this is a cop-out. David should have his cock. No-one stole it or, god forbid, broke it off. It should be there, and BioWare left it out.

Why? Who knows? My best guess is BioWare didn’t think a floppy (or is it hard ’cause it’s stone?) cock would fit with Mass Effect 2’s 15 age rating. Either way, its absence speaks volumes. How odd it is to criticise a game for not having enough cock, when games generally get it in the neck for daring to show even the slightest hint of side boob. Indeed BioWare perhaps knows this better than any developer. Has the farcical furore surrounding Mass Effect’s damp squib of a sex scene dissuaded BioWare from risqué content?

Whatever the truth, David’s missing member is apt: as you play through the DLC, you get the feeling there’s something missing from the overall package. Kasumi’s loyalty mission may be different in terms of gameplay and gorgeous in terms of graphics, but it feels so throwaway that you can’t help but feel ever so slightly ripped off.

And that’s despite the relatively cheap price tag. At 560 MS Points (just under a fiver), Kasumi’s Stolen Memory isn’t too hard on the wallet. But if you equate that to an hour’s worth of new Mass Effect 2 gaming – however impressive – that fiver starts to feel expensive.

What’s different is that for the first half of the mission, there’s absolutely zero combat. Instead, you’re dressed in a smart black dinner suit (or, if you’re female, a sexy evening dress), and attempt to talk your way into Hock’s snotty party. As you clink champagne glasses with Hock’s guests, you put the feelers out, with Kasumi cloaked in the shadows and whispering in your ear. There’s nothing particularly challenging about this set up: you always know where to go and what to do, and with a decent Paragon/Renegade score you’ll breeze through the dialogue, but it’s an enjoyable change of pace, and feels distinctly cool. Cool like Bond. James Bond.

It’s also bloody gorgeous. Hock’s plush gaf is set in a mountaintop (like the best Bond villain lairs), and provides perhaps the most stunning vistas in the game. I spent ten minutes gawping at the scenery while hanging out on the balcony, so jaw-dropping was the horizon.

It’s not long, however, before the action reverts to type, and all hell breaks loose. You get some nice new toys to play with: an SMG, a heavy weapon, and, later, a new outfit, but the DLC’s action feels instantly familiar. Cover, biotic power, shoot, bang bang you’re dead.

Then, in what feels like a blink of an eye, it’s all over, and you’re back on the Normandy twiddling your thumbs. BioWare will say that, technically, you can start a new game plus and use Kasumi and her backstabbing, stealthy powers, which, by the way, look the business, to play through the entire adventure. But this misses the point. You can’t talk to Kasumi like you can with the other party members. She works like Zaeed Massani, the tough-talking bounty hunter who was made available to download for free prior to this release. All you can do is click on her in her cubby hole on the Normandy and listen to her sprout a few lines of dialogue. Because of this limitation, she’s simply not as interesting as the other party members, and it devalues the important decision you have to make at the end of her loyalty mission. Kasumi is not the kind of dinner guest you’d describe as good company.

You can’t even shag her. This, I know, is a somewhat juvenile complaint. But I’m telling you, if you were able to romance her, if she had something approaching the personality of, say, Jack, or Mordin, I’d be much more inclined to play the game again with her in tow. Grunt.

As it is, Kasumi, and this DLC, is nothing more than a disappointing distraction. Is it worth the cash? Probably, just about, if you’re so in love with Mass Effect 2 that you often find yourself crouching behind the walls of your house pretending to use biotic powers on bemused family members. This isn’t a dig: I often find myself wishing I could shag aliens. It’s just a shame you can’t do it with Kasumi. Some Bond girl she turned out to be.

Kasumi, and this DLC, is nothing more than a disappointing distraction. Is it worth the cash? Probably, just about, if you're in love with Mass Effect 2?
6 Unique infiltration gameplay Looks fantastic Over too soon Kasumi isn't particularly interesting