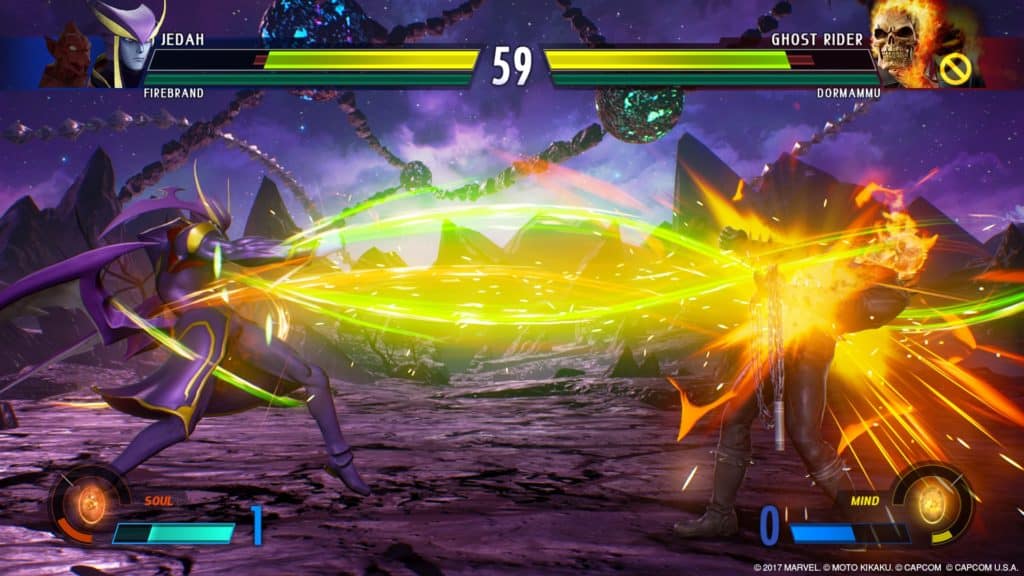 In the years since the last new Marvel vs. Capcom was released there’s been a massive upswing in interest in Marvel in general, driven primarily by a creakingly huge cinematic universe that’s only getting huger. A lot of MvC:I feels heavily geared towards Marvel fans, specifically those who are into it via the films. Most of the stages are leaning in that direction In the single player story, the cutscenes have shots that mirror ones from the movies, and the whole thing revolves around the Infinity Stones, which are a big part of Marvel’s once and future roadmap for the shared universe.

Notionally the story explains how the two different game universes got confusingly mixed together into a trifle made of punching. In reality it makes very little sense: I can tell you that Ultron from Marvel and Sigma from Mega Man have fused together both themselves and the two universes, so they can wipe out all biological life, but beyond that you’re really on your own. Look, at one point Chris Redfield meets Frank West in an underground science facility (A.I.M.BRELLA) and they Rescue Mike Haggar. Then they fight genetically engineered zombie monsters that kind of look like Deadpool. M.O.D.O.K. shouts in the background. I don’t know. Everyone betrays one another, seemingly at random, and shouts one liners (which I admittedly enjoyed quite a lot) as they do so.

Then there’s the art. There was some uproar about the design on some of the 30 strong roster, including Chun Li, Ryu and Frank, and they’ve been ‘fixed’, but as a whole the style remains a bit directionless. Bringing loads of differently designed characters together and cramming them into a new game is always going to be a challenge, but even the Marvel side by itself lacks a cohesive look. It’s a mixed bag; one that you stick your hand into and pull out, say, a Captain Marvel who leans almost to realism, before dipping in again and pulling out an angry potato dressed as Thor.

If you can avoid looking too closely, though, the combat is fun. MvC:I returns to 2v2 combat, and feels more about going on the offense than hanging back. In a lot of instances blocking isn’t anywhere near as good an option as countering or pushing back with an advancing guard. There are also few restrictions on when you can tag in your alternate fighter. It gives more opportunities to build up massive streaks and juggle your opponent, but some timely damage limiting, plus the ability to Counter Switch to tag out a character caught in a combo, means that a battle won’t be decided by who gets the first major attack in, so the tide of a match can easily flip back again.

This combines with the Infinity Stones, which offer an extra edge and can be used to counter the weaknesses of your character choices. You equip one before the match start, so if you’re using bigger, slower fighters, like the Hulk or Haggar, then the Time stone lets you blink through your enemy to flank them. If you’re playing a faster but weaker sort like Morrigan you could go with the Soul stone to leech health, or you might like the Power stone to pack a bigger punch. The Space stone pulls your enemy towards you if they’re hanging back, the Reality stone produces a semi-homing projectile, and the Mind stone binds and dizzies the enemy. If you forgo using these Surge powers, as they’re called, you can store up enough for an Infinity Storm — for the Soul stone it resurrects a character if they’re out of the fight, while the Space stone traps your enemy in a rectangular box, restricting their movement. They add a nice layer to the combat, especially when you have to think tactically about the stone your opponent is using.

This obviously all comes out best in PvP rather than single player, and in my play time the online matches were stable, although the time for matchmaking varied quite a bit. Your opponent’s choice of fighters and Infinity stone is kept secret until the fight starts, so there are no last minute backouts from scrubs who don’t like fighting against Dante. There are a couple of different options for fighting online, too, including a Beginners League for players of 14th rank or below, so it’s not quite as intimidating to dip a toe in the water if you’re new.

Capcom has evidently tried hard to give the game a bit of accessibility to newcomers. An easy hyper and easy combo are bound to very simple inputs, so you can feel like you’re doing something cool even if you’re not sure how it all works. But at the same time, the tutorial pop ups in the story are brief and feel incomplete. There’s a more in depth tutorial included in the Mission Mode, but it’s a bit clunky — you’re taught how to aerial dash before you’re taught how to jump, for example, and things like recoverable health aren’t explained — though the Character specific training can be helpful. Despite the concessions, it still feels like players who are more experienced are going to get more out of the game, though one can imagine gentleman’s agreements that you’re not allowed to just spam the easy hyper arising at higher level play.

MvC:I has taken cues from the swathes of additional content that other games in the genre have been adding, and has tried to keep up. But despite the increased active switching between characters and the addition of the Infinity Stones keeping the combat competitive with the rest of the market, Marvel vs. Capcom: Infinite can’t quite make the leap from being good to being great.

Marvel vs. Capcom: Infinite is, like football, a game of two halves. The actual fighting half, which is arguably the more critical 50% anyway, is fun and exciting. The other half is a bit confusing.
7 Combat is aggressive and fun Additions like the Infinity Stones are cool Single player and other modes are lacking Thor looks like an angry potato 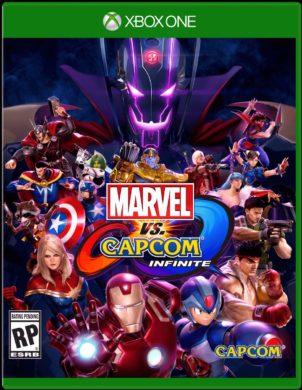