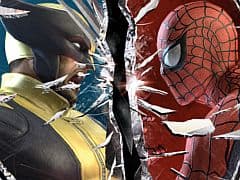 In the wake of Disney’s purchase of Marvel, we thought it would be fun to brainstorm some fantasy Disney/Marvel ultimate alliances. How about The Hulk, Thor, Simba from Lion King and Ariel’s dad, King Triton, from The Little Mermaid? That would be a pretty useful team, wouldn’t it? Or how about The Fantastic Four and The Incredibles? Imagine the damage those nine would cause. The possibilities are as endless as they are silly.

For now, though, we’re going to have to make do with Marvel-only teams, in the fun four-player action RPG dungeon crawler Ultimate Alliance 2, the sequel to 2006’s original. But still, the possibilities for combining superheroes, famous and obscure, feels just as endless, and just as silly, as they do in our fantasy team-up.

This is in no way a criticism. In fact, what’s best about MUA2 is trying out all the Fusion Powers, the game’s headline new feature. It’s a simple but fun mechanic. You kill enemies, usually generic Latverian soldiers or robots, and fill up a gauge on the bottom right of the screen. Once done, pressing the left trigger will display a face button above the head of each of your three team mates, as well as a one word indication of the kind of Fusion Power that combination will perform. Targeted, for example, is good for doing damage to a single enemy; Clearing is great for spreading damage in a radius; and Guided allows you to control the carnage.

Each Fusion Power is different. Well, a lot of them are kind of the same – most of The Thing’s Fusion Powers involve him tearing a lump out of the ground – and they’ll all get the job done, but finding out for yourself just what cool animations the developer has drummed up for your favourite partnerships is all part of the fun.

Either way, there are loads. And the sheer number of them in many ways makes up for the game’s obvious issues. It’s hard to complain too much about the repetitive combat, the generic enemies, the bugs and the at times psychotic camera when you’re busy enjoying every Marvel fan boy’s wet dream. Play with three other Marvel fanboys either on the same console or over Xbox LIVE or PSN, and, well, you’ll probably want to burn your sheets, not wash them.

The game is cleverly designed so that you’re constantly progressing and bettering yourself, be it with the unlocking of new characters, power upgrades, new abilities, passive buffs or the basic pleasure of levelling up, you always feel as if something shiny and new is just around the corner. And if it’s a new character, then that means new Fusion Power combinations.

Beyond this, MUA fans won’t find much new in the way of gameplay. It’s still a linear dungeon crawl with awful dialogue and a pointless three-pronged conversation mechanic (Mass Effect this is not). The plot’s new, of course, but will be familiar to readers of Marvel comics. It’s a combination of two popular mega story arcs, the Civil War and the Secret War. The game begins in Latveria, the fictional European country that Doctor Doom calls home. S.H.I.E.L.D chief Nick Fury is leading an unsanctioned invasion, hoping to deal a blow to the terrorist state once and for all. He gets his way. The first level sees you razing the place to the ground and a boss fight with The Tinkerer. Job done.

Flash forward a year and New York is under attack. It’s the Latverians gunning for revenge for Fury’s invasion. You repel the attack, but not before hundreds of civilians are killed. Public opinion forces the government to impose the Superhuman Registration Act. What this means is, about a third of the way through the game, you, the player, are asked to pick a side. Will you fight for the government, rounding up superheroes who refuse to tow the party line? Or will you go underground, fighting against those who you once called friends?

The set up is a clear allegory for the September 11 attacks and current civil liberties issues, although it’s executed in stereotypically comic book fashion. We’re not saying it’s The Odyssey, or anything other than an excuse to beat the crap out of other characters in the Marvel universe, but it’s better than what we might have had for a plot. And at the very least it adds replayablity, because your choice determines what superheroes you’ll have available to play with, what characters you’ll unlock, and the ending of the game.

A nod must go to the graphics. Up close the game looks positively ugly, with bizarre-looking face animations and poor quality textures. But when the game’s viewed in the dungeon crawl perspective, the one you’ll view 99 per cent of the game in, MUA2 at times looks hugely impressive. Almost everything in the game can be destroyed or picked up and lobbed at enemies. The Hulk, for example, can pick up ambulance and send it spiralling towards a group of bad guys like a blue and white meteor. There’s always loads going on, be it explosions, flying enemy shields, Fusion Powers or just scores of goons on screen at once. It all combines to form an impressively destructive spectacle. Graphics are often rubbish in superhero games. Developer Vicarious Visions should be applauded for its work in this regard.

MUA fans may bemoan the lack of change, and they’d have a point. Bar the Fusion Powers there’s little new going on here. But it’s still a fun, albeit brainless romp that’s sure to please Marvel fanboys. If you go in not expecting to play the game of the year then you’re going to get a hell of a lot of fun out of MUA2.

If you go in not expecting to play the game of the year then you're going to get a hell of a lot of fun out of MUA2.
8 Fusion Powers Marvel! Co-op destruction Repetitive combat