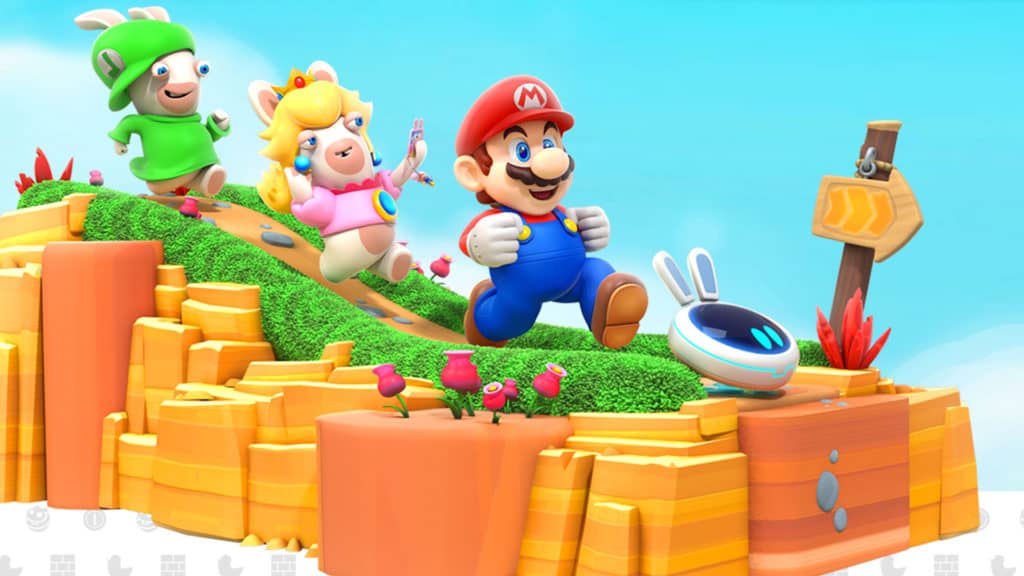 There’s a number of people who see evil when they look in a Rabbid’s eyes. They don’t see the playful nature of a mischievous scamp, they see a Bugs Bunny that’s befriended Trainspotting’s Sick Boy. For years, many detractors have been vocal about these vile creatures that pierce ear drums with nonsensical ramblings.

But something strange has happened: Mario and friends have helped make Rayman’s former co-stars palatable in this turn-based strategy title. Mildly funny, even. The slapstick gags in cutscenes mightn’t have long-time Vic and Bob fans reaching for the Polyfilla to mend their sides, but I dare the big kids out there to keep a straight face while selfie-mad Rabbid Peach shows her disgust at Princess Peach’s dress of choice. The Rabbids’ take on Mario personalities is a delight, and shows the care taken by Ubisoft when sticking its idiot rabbits in the Mushroom Kingdom. Mario + Rabbids Kingdom Battle probably shouldn’t work, but it does.

Thanks to a time travelling washing machine and a headset that can combine two objects to create one, the Rabbids now find themselves causing unrest in the world of Nintendo’s mascot, merging themselves with all manner of objects to create a diverse number of foes that Mario and co. must thwart in an effort to bring peace back to the Mushroom Kingdom. While it’s a bit loose, there’s at least some context as to why these two seemingly immiscible worlds would mix. It’s a beautiful looking world, too: full of the vibrancy and life you’d get from a Nintendo-developed game. As a sentient robot leads your party across the variety of worlds, colour bursts off the screen and Rabbid personality fills your once cynical eyeballs with tears of acceptance while you roam around the delightful locale.

The aforementioned robot, Beep-0, leads Mario and two other interchangeable members of your eight-strong party as you travel around the four worlds available. In between battles, you’ll solve a multitude of pigment-based puzzles that rely on you pushing a block onto the red switch to open a corresponding door, or place a statue on the green block to clear the emerald pathway. As you progress, these get more taxing, but are passable with a small bit of thought. What may hinder you is the intermittently fixed camera, though. Especially prevalent on the timed bonus stages, the camera positions itself in awkward ways a lot of the time, and because Beep-0 is the player-controlled character, and much shorter than the rest of the heroes, it’s easy to find yourself fumbling behind a larger structure that obscures your view. This fixed scene-setting option goes from behind the player’s back, to an isometric view, to a side-on shot, and while it creates some lovely sights, it can be to the detriment of players searching for that treasure chest with a collectible inside.

You rarely have to worry about any of that on the battlefield, though. Mario + Rabbids Kingdom Battle may have some wonderful character, but at the end of the day, it’s all about trying to outsmart the opposition in strategy-fuelled match-ups on elaborately set-up, yet tight, maps. Your three-person party take it in turns to move a select number of spaces on a grid, and take a shot at/debuff enemies, or buff themselves and/or their friends. After you’ve completed your turn, you have to sit back and let your adversaries have their go, hoping that you’ve taken the necessary precautions to minimise damage: placed your characters in decent cover, ensured they have enough HP to weather the storm – that sort of thing. M+RKB informs you of your goal at the beginning of a fight: reach a specific area of the map, or defeat the Rabbids opposing you. There’s a few escort missions thrown in for good measure, but that’s the long and short of it. Safety plays may have to be taken out of necessity, at times, but employing a gung ho approach is encouraged, as is keeping your squad within close proximity of one another.

When moving a character on the board, you can link up with one of your buddies for a Team Jump, which makes your range larger, allowing you to move that character further on the map. Some characters, such as Mario, can use this to gain some distance and inflict pain on the nasty Rabbid variant by crashing down atop their heads. Dashing is the other method of dealing damage while on the move, which is effectively slide tackling an enemy before finding your resting spot and having a pop at them with your gun. If you have a levelled up team that can lay on a hurting with movement damage it’s really fun to see how it plays out.

Party members are added throughout the game, but I rarely changed from my original trio of Mario, Rabbid Luigi, and Rabbid Peach, because it was ideal for me. Rabbid Luigi tackles enemies with his vamp abilities, draining their health while increasing his own; Mario’s brought into play by using the more advanced Luigi as a stepping stone to butt stomp baddies, readying himself for the opposition onslaught by using Hero Sight, which sees the plumber shoot down a foe on the move; and Rabbid Peach rounds out the trifecta by taking rivals off their feet with a few well-placed dashes, before finding herself within healing distance of her two friends. I rarely felt compelled to mess with this combination because Kingdom Battle never gave me incentive to do so; nor did it punish me for sticking with the tried and tested. I messed about with my squad, especially when newbies joined, but regular Peach’s healing abilities weren’t as straightforward as her Rabbid counterpart, and normal Luigi’s health was lacking, even after being maxed out in the skill tree. There are pros and cons to all the characters, obviously, but anything I dabbled with wasn’t as powerful as my original team.

Even with my three lovely boys and girls firing on all cylinders, things got rather difficult in Mario + Rabbids Kingdom Battle. At the beginning of each battle a prompt pops up on screen asking the player if they’d like to turn on easy mode, which when selected, heals your squad to full health and adds an extra bit on top to get your over the hump. This was essential in certain match-ups for me, because while I had my plan of attack and an arsenal that I was constantly upgrading, the unpredictability of fights meant it was sometimes hard to foresee what would happen on the enemies’ turn. The Mario staple of pipes are dotted across maps, giving you the chance to change your position quite drastically, but your foes can also do similar. On top of that, specific weapons have a percentage chance of having an effect on opponents like pushing them in a certain direction, sticking them to the ground with honey, burning them, and so on. These work out wonderfully sometimes, but burning an enemy while in cover, for example, can see them run around in circles while they try to pat out the fire, before they end up in an advantageous spot for their turn. To be fair, though, the same can happen to you. It’s important to expect the unexpected as well as you possibly can, as battles can take upwards of 20 minutes. If you fail, you start all over again.

Subtle changes to the core group of rival Rabbids, and a rarely used third element such as the Chain Chomp and Boos — who don’t answer to anyone and will jump on both you and your enemies if you cross their paths — are enough to keep things interesting, but because fights can be quite long and there’s an element of trial and error involved when you come up against new obstacles, it gets infuriating at points. With the amount of collectibles scattered about the place and the option to play some co-op battles too, those looking for a lengthy experience will be overjoyed, but it was a little long in the tooth for my tastes.

This is an amalgamation that had many wincing upon its announcement. Sure, it has some issues, but the moment I saw the Italian pull out his gun and down an adversary after Rabbid Luigi slid in with his studs showing, I knew Ubisoft had done a good job of proving the naysayers wrong. Mario + Rabbids Kingdom Battle probably shouldn’t work, but it does.

While Mario + Rabbids Kingdom Battle may have been the crossover that no one wanted, it's materialised as a really good one with some interesting systems, despite its smattering of shortcomings. It shouldn't work, but it does.
8 Rabbid Peach Linking up to cause damage is joy when it comes off Looks like a mainline Mario game Some battles go on a bit longer than wanted 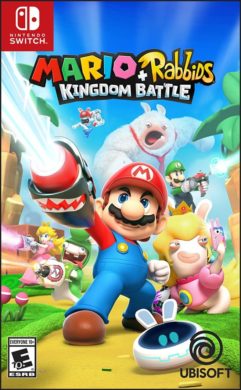