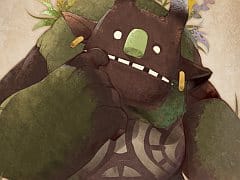 Majin and the Forsaken Kingdom Review

I have weak tear ducts; it’s one of my very few flaws in life. I cried the other week during Mrs Doubtfire, and bawled like a baby after being forced to watch Marley and Me. I don’t even like dogs. Anyway, there was a moment whilst playing Majin and the Forsaken Kingdom where I struggled to hold back the waterworks. I didn’t actually cry, I hasten to add, but the actions of my partner – nay, my companion – genuinely moved me.

We were caught in a heated fray in the Forest of Tagalo. I’d rushed into the area without much thought, failing to notice an option to lure the enemies into a trap that would allow safe passage through the area. It was a reckless decision. I was quickly separated from the Majin, surrounded by three or four shadow warriors, each dripping with thick black ooze. They’re really quite scary up close, like sinister reflections of Jack Skellington from The Nightmare Before Christmas. Meanwhile, Majin was fending off about six of the buggers by himself, and judging by the rapid depletion of his health bar, he was having a hard time of it.

“Help me, Tepeu!” he shouts, his voice pregnant with fear. Despite his huge frame, tree-trunk-arms and boulder head, the Majin is incredibly child-like in nature. I saw one of the creatures sink a set of dagger-like teeth into his back. His health bar plummeted into the red. By the time I’d managed to escape to help him, it was already too late. Majin was sprawled across the ground, his last words a heartbreaking “I’m sorry”. What’s so sad about this tale is that I should have been the one apologising to him. It was my actions that had got him killed, and yet he blamed it all on himself. This wasn’t a scripted event or a cutscene, but a situation born out of common combat. And yet it was tragic all the same. The Majin is loyal to a fault, which makes him one of the most successful companions in video games since, well, perhaps ever, actually.

While true that I’m a bit of a pansy when it comes to this sort of thing, it’s also true that Game Republic has done a fantastic job of creating a character players will care about. During my final year of university, I wrote my dissertation on emotional attachment in games. It was a discussion into which non-playable characters successfully tugged on the heart-strings of the player, and how they went about doing it. I stripped characters including Aggro (Shadow of the Colossus), Aeris (Final Fantasy VII) and Yorda (Ico) down to polygons and isolated game mechanics, trying to pinpoint exactly what it was that made players invest in them emotionally. I summarised that emotional attachment is born out of three key areas: context of world and narrative, vulnerability and usefulness as a gameplay device (there were other areas worthy of explanation, but this review is already longer than I anticipated). If I were to analyse the Majin by these measures, he’d tick all the boxes.

In terms of context, Majin and the Forsaken Kingdom is a fairly traditional setup. During a time of great darkness, a lone thief sneaks his way into an old castle to rescue a legendary guardian that is said to be held captive there. In freeing the Majin, the thief plans to cleanse the land of darkness, using the creature’s powers to restore peace and prosperity to the tainted lands. Underneath this fairytale yarn is a far more interesting narrative concerning both characters’ pasts, but I’ll refrain from revealing anything more on the subject.

Personality wise, the Majin is a simple fellow. Simplicity is crucial in creating attachment too, incidentally; the more complicated a character is, the harder it is to sympathise with. Thankfully there isn’t much going on upstairs with Majin, just an overwhelming sense of loyalty. He’s like an infant in that respect; a child that will do anything to help and impress his parent. Despite his size, it’s actually you who ends up looking after him, telling him what do and making sure he doesn’t get himself into trouble. Confirming what I found to be true in my dissertation, he is indeed a vulnerable character. His muppet-esque appearance compliments this endearing nature, as well as giving the game its distinct aesthetic. Even the hero, Tepeu, looks like he was conjured up in the mind of Jim Henson, with huge roaming eyes and long hair, much like the memorable Gelflings from The Dark Crystal.

A tap of the R2 button will bring up the Majin’s command menu. From here you can request that he wait or follow, as well as asking him to open doors and smash boulders. As well as forging the path ahead, his other main purpose is to aid you in battle. Tepeu is fairly useless by himself, and requires the brute strength of his companion in order to get anywhere in the game. The Majin will pummel his enemies with colossal fists, knocking them to the floor where you can follow up with a combination attack. These special moves see the Majin launching Tepeu into the air, where he’ll rain down on a grounded enemy to finish it off. It’s a simple one-button combat system on Tepeu’s part, with simple combos strung together with the Square button, but there’s strategy to be found in taking advantage of the Majin’s unique abilities.

Loose role-playing mechanics underpin the combat. Defeated enemies will yield blue and red orbs; blue increasing the strength and stamina of Tepeu, and red increasing the friendship level between him and the Majin. The higher the friendship level, the more powerful combination attacks can be unleashed, and the quicker the Majin will be able to heal Tepeu. There’s also an armour system in place, allowing you to dress Tepeu as a bandit, marine or warrior, amongst other things, each offering different bonuses to combat. The Majin’s appearance will change over time too, reflecting his return to form as he gets more powerful over the course of the story.

The majority of the game is spent trying to find four dark generals, whose powers keep the door to a castle locked. The idea is to defeat the generals, gain entrance to the castle, kill the king and restore peace to the kingdom. Pretty simple. The world itself is rich and varied, with forests, mines, deserts, caves and even an old abandoned warship forming the kingdom. The experience as a whole is fairly Zelda-esque in structure, with a large over-world that can be explored however you see fit. You’re free to stroll about as you wish, but certain paths will remain blocked until the Majin has acquired certain abilities. During the adventure, the Majin will recover powers of wind, lightning, fire and water, which can douse flames, swing platforms and spark ancient mechanisms back to life.

The game manages to strike a perfect balance between exploration, combat and puzzles, with some formidable head-scratchers extending the life of the game considerably. It’s a game with a fantastic sense of pace, with new skills becoming available just when the novelty of the old ones begins to wear off. It’s not perfect, however. Although there’s a decent map in place, there isn’t any destination or objective markers, which often force you to roam about the Kingdom until you chance upon where you need to be next. There are some lazy graphical tricks implemented, too. In the desert areas, for example, a film of sand is placed over the screen, which remains in exactly the same place as the camera moves about the environment. There’s the odd animation glitch, too, with Tepeu’s limbs flailing about at impossible angles when he (frequently) gets tangled up in his environment.

Like the Majin himself, however, it’s hard to stay angry at the game. It’s the little things: seeing the Majin clap his hands with excitement when you bring him a piece of fruit; the pride in his voice when he shouts “I did great!” after solving a puzzle; the comical “ouch” that accompanies his frequent trips to the floor. If he wasn’t such an endearing character, the game would fall flat on its face – it all revolves around partnership, and if there’s no desire to help or protect the Majin then there’s not much enjoyment to be had with the game. Thankfully Game Republic has created a character that is hard not to fall in love with, and a great game has been created in the process.

I’ve been banging on about emotional attachment a fair bit in this review, but hopefully it serves to illustrate a point: as far as companionship gaming goes, Majin and the Forsaken Kingdom is up there with the best of them. It’s incredibly hard to create characters that a player will actually care about, and Game Republic has achieved just that. If I was to repeat my dissertation today, again using a survey to ascertain which NPCs gamers found themselves most attached to, Majin would definitely get a few mentions.

Majin and the Forsaken kingdom is a game that will inevitably get glossed over this Christmas, brushed under the carpet by Call of Duty, Assassin’s Creed and Gran Turismo. If you enjoy rich worlds, interesting stories and endearing characters, however, I implore you: don’t let this pass you by.

If you enjoy rich worlds, interesting stories and endearing characters, I implore you: don't let this pass you by.
9 Great puzzles The Majin is incredibly endearing Poor navigation system The odd graphical glitch

Majin and the Forsaken Kingdom

Majin and the Forsaken Kingdom