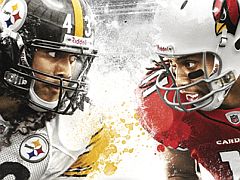 It’s no longer okay to simply dismiss EA’s humongous Madden franchise outright as that video game of that massively complicated sport where mammoth-sized men covered in protective armour smash their helmets into each other like demented bison until one team falls down. You see, American Football is actually hugely popular in the UK.

So much so, that Wembley Stadium has played host to two regular season games over the last couple of years. They both sold out. Another will be played this season. It’s already sold out. Imagine a Premier League game, perhaps Manchester United versus Chelsea, being played in Giants Stadium, New York, instead of Old Trafford?

So, here in video game land, we need to do Madden justice. With the release of Madden NFL 10, the latest in the long-running series, we actually have to work out if it’s actually any good.

The answer? Well, yes, it is good, but only if you’ve got a base understanding of the sport in the first place. Madden doesn’t want to teach you how it works. It assumes a complete understanding of the running game, the passing game, defence, offence, end zones, first downs, touch downs and everything else America’s Game has to offer. This isn’t the problem – nobody turns to FIFA or PES for the finer points of the offside rule.

The problem is that even if you do know the rules of the real sport, Madden doesn’t tell you how to play the video game version. Play calling, snapping the ball, running, passing, catching, and, even more difficult to get to grips with, defence – tackling, intercepting, and again, play calling – the buttons you need to press to make it all work aren’t explained. If it weren’t for a hazy memory of playing the game to death while at university, Madden would have proved an impenetrable fortress of astronomical proportions. There’s a practice mode, which doesn’t help. The Virtual Trainer mode is useful, but not useful enough. If you fancy dipping your toe into the virtual world of NFL, then, be prepared to read the manual and do a bit of research first.

If you put the effort in, though, Madden NFL 10 reveals itself to be an impressively realistic, graphically gorgeous sports game that’s absolutely packed to bursting point with content. Just playing an exhibition is fun – the difficulty resulting in a rewarding experience. When you snap the ball, the play will unfold with the camera positioned behind the quarterback. With any luck, your offensive linesmen will have carved a hole for your running back to burst through. With any luck, your receivers will get open. With any luck, you won’t be sacked by some monstrous brute from the Deep South. Eking out first downs, inching your way towards the end zone yard by yard, then finally scoring a touch down, is great.

Gameplay tweaks this year are small but noticeable. The new Pro-Tak (which sounds like some performance enhancing drug) animation system allows up to nine defenders to gang tackle. It doesn’t happen often, but when it does it’s bone-crunching stuff. You find yourself checking your spine, just to make sure it’s still in one piece.

In fact the animations are, across the board, superb. Quarterbacks have their own individual stances and throwing styles. Receivers rise to catch balls realistically. One touch down I scored saw my New York Giants receiver rise to catch a ball just outside the end zone, only to be sent spinning in mid air by a tackle that sent him across the line for a score. The landing looked like bad news for his neck, but the most important thing was that it sent me into the lead.

Madden NFL 10 plays slower than previous iterations. Obviously EA’s trying to make the game more realistic – and it helps. You’ve got more time in the pocket, more time to spot the hole, more time to take everything that’s happening in, process it in your brain and somehow do something that won’t end up in crushing defeat.

The problem the Madden series has always had is that you don’t always feel in control of what’s happening. There’s so much going on during any play, so many players crashing into each other at the same time, that it’s feels impossible to keep track. It’s not so bad on offence, but on defence whether you stop first downs, intercept passes and sack the quarterback feels like pot luck. It won’t be this way for experts, of course, but for jokers like me, Madden takes the simulating the match day experience a tad too far.

Otherwise, it’s as you were for Madden. It’s largely the same game as before, despite the countless improvements and tweaks that have been made. Two player online co-op is featured for the first time ever. EA has implemented an online version of the engaging and massively complex Franchise Mode, which works well. It’s got live drafts, player transactions, league message boards, all of which you can manage from your console or the web. It allows you and your mates to play in persistent seasons, which lends the game more of an MMO feel.

The Franchise Mode itself has had a few bells and whistles added to make you feel more like you’re watching a game on television. Most of these additions are pointless, even annoying. You’ll see supporters milling about outside stadiums before the big match, buying hot dogs and merchandise. The first time it’s pretty cool. The second time you skip.

Some of the new features don’t quite work. EA’s employed an “Everything you see on Sunday, see it in Madden NFL” approach to the presentation, which has resulted in live action clips of presenters delivering half time reports and league round ups. This is a good idea in theory, but the dialogue is so wooden that it sounds ridiculous, almost funny. It’s almost like listening to that woman announce that you’re on the “109… too … Croydon Town Centre.” The commentary, as a whole, is awful. EA’s FIFA commentary is much better, which is a puzzling situation, given you’d imagine the company would trade tips on how it’s done.

Is Madden NFL 10 the best Madden game ever? Probably, although it seems like an impossible question to answer given the series has been running for at least 50 centuries. It’s no doubt the most authentic. The biggest problem is how inaccessible it is. As a Brit who understands how the sport works, and who played Madden back in 2000, the game can still be a mind-bending, frustrating exercise in trial and error. We often complain that games hold our hands a little too much. An optional tutorial here wouldn’t have gone amiss.