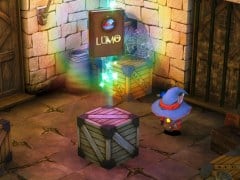 I never played Head Over Heels, the 1987 isometric adventure game that Lumo takes inspiration from. I did, however, play the 1994 Rare-developed Monster Max for the Game Boy. Monster Max was awesome. I didn’t know anything about it, saw it on the shelf in Woolworths, liked the look of the screens, and didn’t regret a thing. The isometric adventure genre faded away pretty soon after that, probably thanks to Nintendo inventing the 3D camera. Bloody Nintendo. Anyway, Lumo hits the nostalgia angle hard, and for the most part is jolly good fun with it.

You play as a wizard (there’s a bit of backstory behind this, but I won’t spoil it) who must navigate a series of connected rooms, jumping from platform to platform, finding keys, pressing switches, reflecting lasers, and more, all while trying not to die. Death comes easily in Lumo (more on that later) due to a liberal dosing of spikes, fire, electricity, spinning death discs, more spikes, wasps, spikes that come out the ground, falling blocks, and other stuff I’ve deliberately not mentioned (forgotten).

The challenge starts off pretty tame, the game doing a good job at easing you in, and you’ll be thankful as platforming in 3D with an isometric camera is tricky (you can move the camera position, but only slightly). It pays to use the room objects to cement your position in a brain that will likely want to play tricks on you. I lost count of the times I leapt for a rope or platform, only to see my little man die as he completely missed. It gets easier, and playing a proper platforming game feels great, but the troubles don’t completely go away.

Nods to old games, developers of yore and even full-on homages all come together to create a game that delights more than it probably has any right to. Visually Lumo is basic, mechanically it’s archaic, yet this adventure is one that you’ll want to see through to its conclusion – usually with a smile (or at least a mild grin) on your face. I say usually because at times Lumo made me pretty mad.

As sweet and twee as Lumo is for the majority of its duration, it doesn’t half frustrate at points. A handful of rooms (and it really is five or fewer) angered me so much that I told myself I’d had enough. A combination of the fixed isometric camera angle, an increase in objects/enemies that kill or just completely bonkers level design results in moments where all your nice thoughts are taken away on a rampaging river of bile.

The ice levels are among the worst offenders, the little character’s grip on the ground lessening to the point of annoyance considering what you need to accomplish. In one room you’re required to move ice blocks around by pushing them into barriers, eventually getting them into the position required to clamber on top and reach a door. It’s easier said than done. On countless occasions I accidentally slid into a block, sending it careering across the room into a wall, smashing itself and my sanity into tiny pieces.

These troublesome rooms were eventually overcome, usually after I’d sworn never to play the game again. Thankfully you are respawned in the room in which you died, although I can’t imagine playing Lumo in the Old School mode, where lives are finite. Still, the option is there if you want it, as are loads of collectible items (some completely hidden, others teasing in the awkward location) for the completionists.

Lumo could have easily been another retro inspired title that did little other than revel in old-school visuals. If anything, the reverse is true here. While visually a little unappealing, the isometric adventure and platforming gameplay are great, with a smattering of hair-pulling moments not enough to irrevocably damage what is a lovely trip down memory lane.

Lumo could have easily been another retro inspired title that did little other than revel in old-school visuals. It's actually a lovely trip down memory lane.
7 Fun adventure platforming Hits the nostalgia button hard Visually not great Can be really frustrating 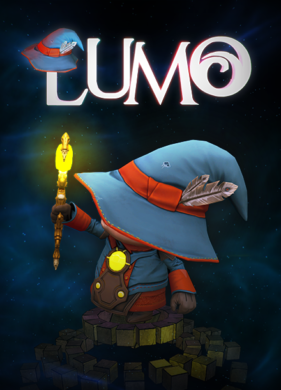