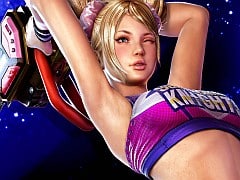 It should be offensive, but I honestly believe it serves a purpose. Rather than being outright sexist, I think the game’s actively mocking misogynist attitudes. Just about every male character – bar Juliet’s boyfriend Nick, and he ends up decapitated, accompanying her as a giant keychain attached to her skirt – is either a drooling pervert or undead, while the female lead comes from a close-knit family of strong, zombie-hunting women. It’s telling that Juliet casually brushes off the drooling advances of her classmates, but is actively wounded by the gender-targeted insults that manifest as physical words spat out by the game’s first boss.

Maybe I’m reading too much into it, and perhaps it’s just a stylistic trick that creative director Goichi Suda thought looked cool. But I’m giving writer James Gunn the benefit of the doubt; the likes of Slither and Super demonstrate that Gunn knows how to create funny, shocking and pulpy stuff with genuine smarts and many lines of Lollipop Chainsaw’s dialogue are delivered with a silent, knowing wink. Besides, Suda’s MO is to playfully mock established gaming tropes just as he celebrates the medium; it’s not too much of a stretch to suggest that Lollipop Chainsaw might be holding a mirror up to male gamer culture, even if occasionally its reflection shows up in the glass. Whether the intended audience gets the joke is another story entirely, but it’s safe to say that men do not come out of this game well.

Besides, Juliet’s permanently sunny demeanour sweetens the sour aftertaste of all the ‘bitches’ and ‘sluts’ like a palate-cleansing sorbet. She’s an enormously likeable protagonist who shares a warm rapport with boyfriend Nick, as they flirt and gently bicker throughout. Theirs is a rare beast in gaming: a genuine, loving relationship that is only compromised slightly by one of the pair lacking a torso.

While the game ventures into darker places, it’s mostly a parade of campy, kitschy, heartily silly moments, perhaps typified by a sequence where you drive a combine harvester to the strains of Dead or Alive’s You Spin Me Round. There’s also plenty of teeny pop-culture references: Juliet describes one boss as a “MySpace-haired jerk”, and there are nods to Katy Perry and Amazon wish lists. Juliet’s sister’s Rosalind, meanwhile, wants to meet Justin Bieber – albeit only to add his skull to her collection.

These gags come thick and fast – not all of them hit, but a reasonable number do, and the same is true of the game’s systems. Combat has something of the rhythm of Viewtiful Joe about it, in the sense that it’s all about staggering enemies before finishing them off with a flourish. Chain several pom-pom attacks together and you’ll temporarily stun zombies, with a single swing of the titular chainsaw decapitating them. The idea is to herd them together and lop off several heads simultaneously in order to earn gold and platinum medals to spend on upgrades and new moves. Kills gradually fill a gauge which can be spent on a temporary attack boost that sees every chainsaw swipe deliver an instant kill, a satisfying flourish on its own, but even more so given the aural accompaniment of Toni Basil’s Mickey.

Though the combination of some terrific animation on Juliet and the bright rainbow trails that follow the movement of the chainsaw make combat look great, in the early stages at least it is a little too reliant on fairly basic combo strings, with many of the best moves locked out until later. Aware that hammering X and Y repeatedly isn’t going to be enough to sustain the game for its seven-hour duration, Suda and director Ikeda Tomo raid their grab-bag of daft ideas to mix things up. Occasionally, you’ll thrust Nick’s head onto a zombie’s body, guiding his movements with quick-time cheers as he jerks awkwardly into position to remove a heavy obstacle, or to give Juliet a boost to clear it. A chainsaw dash is less successful: though it allows you to race over ramps, it gives Juliet the turning circle of a JCB. A further upgrade turns the chainsaw into a gun, but the occasional shooting interludes are feeble, with an embarrassing lack of feedback compared with the meaty rumble that buzzes your palms during each chainsaw finisher.

The bosses, meanwhile, are consistently creative – from the aforementioned screeching punk to the rockabilly on a motorbike that transforms into an elephant, via a Viking who could easily be the drummer in Lordi – but occasionally quite irritating to fight. The funk boss who speaks entirely in autotune is amusing enough until battle commences, but having to cut this floating freak in half no fewer than three times is overkill. Elsewhere, the odd insta-death interlude combined with some egregious checkpointing seems like little more than a cheap way to extend a slender runtime. Such instances are particularly unnecessary given the game’s strong replay value, with time and score attack modes proving a surprisingly compelling draw once the credits have rolled. By this time, Juliet’s moveset has expanded to the point where combat is more involving, the grading system forcing you into a more considered kind of crowd control.

It’s typically scattershot Suda fare, in other words. Some brilliant ideas rub shoulders with some pretty terrible ones, but it’s almost unfair to criticise a game for trying too hard at a time when so many publishers are determined to play their safest possible hand. For every parody that doesn’t quite come off there’s a terrific bit of throwaway dialogue; for every moment of wonky animation or asset recycling a delightful presentational flourish (the menus are some of the best you’ll see all year).

And can you really hate a game that contains the line “don’t be racist against cows”?

Lollipop Chainsaw's brilliant ideas rub shoulders with some pretty terrible ones.
7 An outstanding, eclectic soundtrack The central couple are heroes you can really root for Some ideas simply don't work More combat options should be open from the start