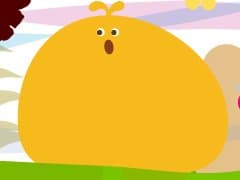 The genius of Tsutomu Kouno’s LocoRoco concept is that its gameplay hasn’t been forced, like a square peg to a round hole, into the confines of the the PSP’s control system, like so many first-person and third-person titles are. The L and R buttons are used to tilt the beautiful 2D game world and the Circle button is used for everything else. That’s it. Nothing more, nothing less.

Some will say LocoRoco 2 is too similar to 2006’s brilliant original, and with good reason. Essentially it’s the same game with different levels and a few gameplay tweaks, but then revolutionising the fundamentals that made the Sony Japan Studio developed title such a perfect fit on the PSP would have run the risk of ruining it. And anyway, its charm, beauty and uplifting nature is just as potent a second time around, even if you’ve felt it all before.

If the word LocoRoco sounds like a particularly uncomfortable pirate-related disease to you, allow us to explain. The LocoRocos are a race of small, singing bubble type creatures who, along with the Mui Mui, care dearly for their planet’s well being. The Moja are an evil alien race hell bent on ruining the loveliness of the LocoRoco’s planet. You play the planet, weirdly enough, and are able to tilt it left and right (using the PSP’s L and R buttons), combining gravity and momentum to move the LocoRoco about the 2D environment. Pressing and releasing the L and R buttons together causes the LocoRoco to jump – the longer you hold the buttons down, the higher the jump will be. While this might sound a little constrictive, and, at first it does feel a little odd, after ten minutes it becomes second nature and all memory of awkward analogue nub controls melts away like one of LocoRoco’s trademark invisible walls.

Although the plot plays a secondary role to the platforming, effort has been made to tell a story through charming cut scenes, so we’ll give it a paragraph. Following their defeat to the LocoRoco in the original game, the Moja army returns to its home planet determined to get revenge. Moja boss Bonmucho, having concocted a new song that sucks the life force from any living thing, launches a fresh invasion on the LocoRoco planet, forcing the environmentally conscious bouncing balls to once again beat them back.

As in the first game, each level is as much a collect-a-thon as it is a captivating puzzler. There’s simply loads to collect. Most obviously, you seek out the 20 berries hidden throughout each level, each one making the LocoRoco grow. By tapping the Circle button you’ll trigger a bolt of lightning that causes the LocoRoco to split into a number of smaller LocoRoco, allowing them to pass through tiny cracks in the environment and reach new areas. By holding Circle, the LocoRoco will call out to each other, inching closer until they are one again. Finding all 20 berries in each level, some of which are incredibly well hidden, is your primary motivation.

Unlike the first game, however, the little cuties now face a genuine threat. There are more enemies than before, including spiky creatures, long-tongued plants, stinging bees, blowfish, Bui Bui (the anti-Mui Mui) as well as floating Moja. Touching one of these where you shouldn’t will cause a LocoRoco to eject from the main blob in panic – if you don’t chase it down you’ll lose it for the rest of the level.

Seeking out berries is never a chore because the levels are designed to make the player always feel they’re within reach. The more you play the better you get at recognising the game’s signposting of secret areas. You pass one by and stick a mental post-it note on your brain, a reminder for repeat attempts. You fly by areas as the environment takes the LocoRoco on a whirlwind tour, perhaps on a gush of wind, and you think, ‘there’s obviously something up there, but how do I get it?’. You poke and probe the surrounding area and, eventually, find a stray vine that allows the LocoRoco to swing up and away, or a plant that sucks them up and spits them out somewhere else. You come across friendly, sleeping animals that can be awoken with song if you’ve found enough LocoRoco. If you haven’t, you can’t help but actively search out more in order to see what the animal does. Brilliantly, LocoRoco 2, like its predecessor, achieves that magical goal of not being too easy, and not being hard.

And it’s also a lot of fun, and often spectacular to look at, despite how simple the graphics appear to be. There are characters you meet in certain levels that prevent the gameplay from getting too repetitive. Take Afro Nyokki, for example, who lends his Afro to the LocoRoco in one level so that they can break through obstacles. At one point, the LocoRoco climb into a brick and take it for a ride, rolling it into square gaps in the environment and opening up new areas. The environment will also, every now and again, take the LocoRoco on roller coaster rides, as it did in the first game. We’ve already mentioned riding on gushes of wind, but the LocoRoco will also find themselves hurtling through tiny gaps that twist and turn at breakneck speed, before being spat out on the other side of the level. One level, set inside the bowels of a giant penguin, sees the LocoRoco attach themselves to what can only be polyps as they travel through its squishy innards. You will even cause the penguin to jolt and change position, which in turn alters the orientation of the level. Brilliant.

Beyond the collection of berries, replayability is added through the collection of everything else you could possibly imagine and more. There are stamps to find, which are then used to fill stamp cards, then there are loads of different materials to find, used to build furniture in the Mui Mui House. There are also a couple of disappointing mini-games – one is a whack-a-mole style quick time event, the other sees you guessing which LocoRoco will win a race. Both are pretty pointless.

As before, everything you do in the game is linked to music, from the singing mouths of LocoRoco to the occasional rhythm action sections that trigger when you need to wake up a sleeping creature. Apart from the main LocoRoco tune, which, I’m sorry, is just bloody annoying, the rest of the music is actually really good. I found myself somehow wishing I could put the acoustic guitar song that plays when you’re fiddling about in the Mui Mui House on my iPod, as well as the track that plays when you highlight Viole, the purple confident tomboy LocoRoco, on the character select screen, so that I might brighten up my gloomy commute. Yes it’s all sung in a made up language that amounts to little more than gibberish, but it’s better than a lot of the crap that currently infects the charts. Fingers crossed Sony Computer Entertainment Europe decides to release the game’s soundtrack on these shores.

Speaking of commutes, LocoRoco 2 is designed so that it can be played, and enjoyed, on the go. It won’t take you any longer than around ten minutes to complete each of the 40 levels, unless of course you’re poring through every detail, hunting down that last, hidden berry. This staccato structure makes the game great for regular short journeys and for those PSP owners who only play their hand held when travelling.

Negatives? Some will think the game too short, the gameplay repetitive and the experience too similar to the original to warrant forking out another £20, but those people are heartless grouches who no doubt spend their time scaring children and trampling on daisies. For everyone else, LocoRoco 2 is the most uplifting game available, not only on the title-shy PSP, but on any platform.

LocoRoco 2 is the most uplifting game available, not only on the title-shy PSP, but on any platform.
9 Incredible music Brilliant control system Heart-warming art design Not massively different to the first game