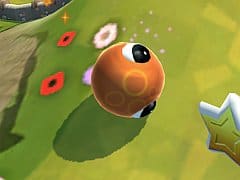 Little Deviants has the dubious honour of being the Vita’s first mini-game compendium. But there’s some doubt over whether or not gamers are prepared to stump up £20 for a collection in an age where many excellent bite-sized gameplay experiences are available on their mobile phones for under a quid. Does Little Deviants offer enough to shame those budget-priced gaming morsels?

The deviants, strange gopher/worm hybrids from space, arrive on Earth only to be followed by an army of old-school Dr. Who-styled robots, complete with nozzles and grabbing arms. The result of this alien invasion is, as you might have guessed, a series of score-based mini-games. Achieve a score good enough for a Bronze award and you’ll also unlock a space-ship part (needed for the deviants to get back to their home planet) as well as another mini-game. Silver and Gold awards unlock additional items.

Being a launch title for the new handheld, Deviants makes use of all Vita’s inputs, so expect the range of challenges to include a mixture of touch screen, rear touch pad, gyro, microphone, camera and button commands. The results are a very mixed bag, with some being more than enjoyable enough to play again and again, while others becoming tiresome long before you’ve managed to earn a Bronze – at times I found myself putting the Vita down once I’d scored enough points, settling for third-place instead of torturing myself more in an attempt at Silver or Gold.

Before dwelling on Deviants’ less-than-stellar mini-games, a handful are good fun. All the games that make use of the gyro are generally decent, with a series of challenges that ask you to navigate underground caves in order to reach a bomb before it goes off being the most entertaining. Race-like levels, in which you tilt the Vita in order to steer a deviant through narrow streets, are never dull, although don’t really showcase the Vita’s unique control options.

A Pac-Man inspired maze mini-game and marble-rolling escapades both make excellent use of tilting too, but the game’s showcase levels (those which make use of the rear touch pad), fall completely flat. Maybe it’s down to the newness of the input, but trying to raise the land in order to roll your deviant about, collecting stars and keys while avoiding enemy robots, proved to be a recipe for a headache. When forced to play these stages it was hard not to imagine them being more fun if controlled with an analogue stick like in the Monkey Ball series or with the gyro.

Another rear touch game, which also uses the front touch screen, is much better. Mimicking the whack-a-mole gameplay model, you simply have to knock robots from ledges inside windows. You tap their back and try to get them knocked off as quickly as possible, mopping up stars and avoiding hitting innocent bystanders.

Augmented reality shooting levels crop up now and again, once again proving that spinning around a full 360 degrees in order to aim is not a fun experience. While the majority of micro games here can be played from the comfort of a sofa or chair (even on public transport), these reality-based stages require full body movement and simply can’t be played without making a fool out of yourself. If you don’t get up and spin around you’ll suffer neck ache trying to spin the Vita around your head.

Little Deviants offers 30 stages, with the majority of games being repeated numerous times throughout, but some crop up far less frequently. Towards the end of the campaign a few one-off events are introduced, but sadly most are either entirely dull or incredibly frustrating. One, which you have to route electricity around a sphere by placing routers in the line of the electricity beams, is fiddly in the extreme. Another, which sees you targeting numbered discs using an aiming system similar to that found in the Bust a Move series, is so simple it’s no wonder it’s only used once.

Outside of trying to complete each game there is some extended playtime to be found if you want to compete for high scores, and an online store suggests that new mini-games might be made available as DLC. An interactive gallery of collected cats might provide some enjoyment, but you’ll have to tolerate replaying many of the worst games in order to get them all.

At £19.99 Little Deviants might seem like a bargain, but on a platform that promises to deliver proper console gaming experiences (and does so decently at launch with a number of other titles), it feels like nothing more than a series of hit and miss tech demos. Released on PSN at a couple of quid and focusing on the mini-games that are good fun, Deviants could have been an essential purchase. As a proper retail release I can’t see where it fits into the current gaming landscape.

As a proper retail release I can't see where Little Deviants fits into the current gaming landscape.
5 Good presentation The gyro rolling games are fun Lots of the games are boring and tedious Too expensive for what it is