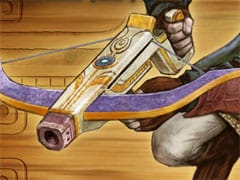 There’s something undeniably cheap about the Wii Zapper. When you hold it in your hands you’re taken back to the days when all you needed to have fun were a few toy guns, make-shift bandannas and some commando rolls in mud. Add an extra 50p to the budget and you’d have water guns, making the danger all the more real. The problem with the Wii Zapper is that it offers none of the fun of these cheap play things, but sadly all the cheapness.

But the Wii Zapper is bundled with a fully fledged game in the shape of Link’s Crossbow Training – a target shooting game set in the Twilight Princess universe. It’s a novel idea for sure, but this faux lightgun shooter doesn’t reach anything approaching the levels of enjoyment found in classics such as Time Crisis and Virtua Cop. As much as we wanted Crossbow training to be a lightgun shooter, it’s just not.

Depending on your set-up you’ll get differing results, but the problem is that no matter how we tried we couldn’t set the game up so it felt like we were shooting the screen – we were adjusting our aim based on the on-screen targeting reticule. Unlike proper lightgun shooters, in Crossbow training this reticule is on-screen all the time, probably for the exact reason I’ve just mentioned: aiming like you’ve got a real gun, or crossbow, simply isn’t possible.

Sadly the combination of the on-screen reticule and the quick-fire shooting makes for a rather odd problem. Because you can see the reticule on the screen, the instinctive nature of the lightgun shooter is lost, with it causing you to take more care over your aim. Pulling the trigger to fire also causes your aim to wobble slightly, which is quite disconcerting even though it’s something you’d never notice in a true lightgun shooter. These factors combined make quick, twitch shooting feel much harder than it ought to.

The game itself mixes standard target shooting, moving enemies and sections that see you moving Link with the nunchuck and aiming with the Wii Remote. The full movement sections cause the most trouble, with the third-person shooter-like controls simply not translating well to the Wii Zapper. You can of course opt to play without strapping the nunchuck and Wii Remote to the gun, and we found this to be more playable, but still not ideal for this type of gameplay.

Presentation is solid throughout, with the game using the engine and assets of Twilight Princess. Zelda fans will definitely appreciate the game more than newcomers to the franchise, but for a budget game it’s well above par and actually one of the best looking games on the Wii. Audio is typically Zelda, with the tunes and sound effects fans will be expecting. A nice touch is the inclusion of online leaderboards for high scores, which gives you an added incentive to re-play completed stages.

As a demonstration of the Wii Zapper Link’s Crossbow training fails quite miserably, but that’s more down to the hardware than any particular failings of the game. Played with a standard Nunchuck and Wii Remote set-up Crossbow Training is fairly enjoyable but nothing remarkable, and a long way from the brilliance of Virtua Cop and Time Crisis. As a budget release you can forgive many of its problems, but that doesn’t make it a better game.

Link's Crossbow Training is fairly enjoyable but nothing remarkable, and a long way from the brilliance of Virtua Cop and Time Crisis.
5 Looks good Budget release Moving and shooting is awkward Zapper doesn't work well