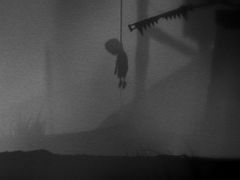 With the influx of pretty independent games over the last ten years it’s easy to start glazing over when you’re staring at high quality artsy aesthetic. The Noughties taught us that armchair productions weren’t actually rubbish after all. The days of churning out cheap flash games in your basement had evolved into a highly stylistic thinking-man’s trade and soon we were inundated with the likes of Braid or Flow. It’s gotten to the point that pretty games happen so often in smaller studios it starts to feel like part of their job description to crank out stunning material.

But Limbo is pretty. It’s incredibly pretty. 10 seconds into the game and it looks like Tim Burton’s entry into XBLA development. “You know what this game needs?” he’d say, and he’d tap at his telly, “More black.” The game is strikingly dark. It’s a black-and-grey platformer coming out of Playdead, a tiny Copenhagen-based studio. The game’s aesthetic had been honed for six years while its designer had been working professionally as a graphic illustrator, and it shows: the game is stunning.

The closest visual comparison is cinema from the 20s. The game begins with LIMBO scrawled on the screen in white-light font that shakes just enough to look like it’s been shot out of a projector. The rest of the game is largely shadows and silhouettes, and what’s not black is softly blurred, forcing you to focus intently on the environment for puzzle pieces.

That black square in the foreground is a box: jump on it or pull it over to that black rope hanging from that black tree over there. Shades end up having their own function in the game, hinting at what’s important to the puzzle and what just looks quite good.

The drawback is that Limbo is so confident in its potent moodiness it can be hard to see anything beyond the gothic art design. The game is essentially what it says on the tin. Limbo is a limbo: a between-worlds death zone on the edge of Hell and your task is to find your sister in there somewhere. A basic list of what it includes is: giant spiders, constant darkness, worms that burrow into your skull, locals being hung from branches, etc. Walk right for long enough and you’re bound to run into at least one silhouette-body, shaking from a tree with a noose around its neck.

Oddly, the game manages to be sinister while still remaining twee. Your character is just a little bobble-headed kid whose only abilities are to push, pull, and jump. You slouch when you stand and your hair flops over your forehead like a wet glove. Your expression is constantly wide-eyed and earnest, with your only visible features being big light-up eyes.

But Limbo really is more than a pretty face. The game is a series of immensely clever and tricky puzzles designed around the most minimal game controls. You get nothing beyond the basics. No hints or inventory. You get a couple of buttons and your wits, and then you’re sent on your way.

Generally speaking you’ll be dead within a minute of your next puzzle. The game expects you to fail often, and you will, but dying in Limbo is never a punishment. It’s a necessary part of learning the rules of each puzzle, and each death scene is animated in such hilarious detail that it’s really its own victory to watch.

Bear traps will litter the first few puzzles while you’re still working out the basic controls of the game. They’ll break the poor kid’s limbs but you haven’t lost out on points, you’ve just learned traps will move if you push them. Later on you’ll be hunted by locals with blow darts and work your way through spider dens. You’ll realise you can’t control the direction of your character when a worm burrows into your brain. You’ll learn that the kid can’t swim when you hit the water puzzles.

Death never means restarting a level; it means you get a decent clean slate as the game reloads the puzzle for you and gives you go after go, and animation after animation of watching your character impaled in various ways. Limbo does what few games of any genre can do, which is trial and error without any of the actual tedium. It’s a puzzle game that is littered with ideas and an artistic eye, but more importantly it understands the frustrations of repetition and makes failure enjoyable.

Limbo is a puzzle game that is littered with ideas and an artistic eye, but more importantly it understands the frustrations of repetition and makes failure enjoyable.
9 Brilliant puzzles Hilarious deaths Beautiful design Baffling plot line