Try to avoid Star Wars fans, at least the ones that were “there when it was shown for the first time” in their town. You’ll undoubtedly be told a story about how their mouth gaped open in sheer wonder at what was happening on the cinema screen, while at the same time hearing about why the new films are awful and how the unaltered originals are still the best. I’m not about to argue with these ‘super’ fans, especially when they’re part of my family, but I know one way to shut them up. Sit them in front of Lego Star Wars II: The Original Trilogy, ideally with you sat beside them, second controller in your hands, and let them relive the movies in glorious Legofied video game form.

If you played Lego Star Wars you’ll know roughly what to expect in this sequel. It’s essentially a third-person action game where you play as characters from the movies, blasting or carving up enemies and solving some rudimentary puzzles. The main difference this time is that you’ll be playing through the story of the original three movies, so in actual fact this will follow on nicely from where the first game left off.

Gameplay is remarkably simplistic, with little more than moving and hammering the attack button being needed, but the various character classes have their own unique skills. Jedis can use Force powers to move objects and confuse enemies, while the likes of Han Solo and Chewbacca can use a grappling hook to reach high platforms. You’ll need to switch from character to character in order to make it through each level, but who you need to be is made incredibly obvious. The trickiest characters to play as are undoubtedly R2D2 and C3PO, who both lack a form of attack and require a ramp in order to climb even the smallest steps.

Other than pushing blocks and making sure you’re the right character to use a certain control point, puzzles often require you to take on a Stormtrooper disguise in order fool security cameras. This more often than not requires a little bit of backtracking, and with one successful enemy attack causing the disguise to fall off, it’s pointless attempting to travel a long distance until the area ahead has been cleared – your AI team-mates do little to help and stand pretending to do something without really doing anything.

Puzzles can generally be solved by performing an action on the object that’s being highlighted on the screen, but a few are a little trickier and will require some thought – or for you to smash up everything in the area in order to make sure you haven’t overlooked some Lego bricks that need to be built. These piles of bricks appear all over the place and, once built, can be the key to progressing in a level. It’s a nice touch to actually have to build things in a game featuring building blocks, and adds to the game’s overall tongue-in-cheek feel.

While the story of the first three movies is told in a way that will be instantly familiar to fans, it’s not without a few moments added by the development team. Jokes are plentiful and often revolve around the voiceless Lego characters trying to talk to each other. You don’t have to be a huge fan of the movies in order to enjoy how the story is told, but it certainly helps to be familiar with what’s going on, as otherwise you’ll miss out on a few of the more hilarious moments.

Star Wars wouldn’t be Star Wars without space combat, and Lego Star Wars doesn’t disappoint. All the major space battles from the first three movies are depicted in Lego form, and are just as simple to play as the third-person action sections. You also get to take part in the Battle of Hoth from Empire Strikes Back, complete with AT-AT Walkers and Rebel Snowspeeders fitted with handy tow-cables. These sections are all played with the camera pulled back so you can get a good view of the action, and are great fun.

If you really hammer through the game you’re likely to finish in less than eight hours, but there’s a whole lot more to see and do once the three movies have been completed. You won’t be anywhere near 100% complete as each chapter (there are six per movie) features numerous sections that can only be accessed with certain non-standard characters, meaning you have to come back once they’ve been unlocked. From within the hub area you can also build your own Lego characters, purchase new characters, build models, and more.

The main reason to play through the game again, though, is to play with a friend. Playing alone is great fun, but Lego Star Wars II is best played in co-op mode. Because the gameplay is so simple (and death isn’t an issue – you simply respawn and continue) it’s the perfect game for players of all ages, and dropping in and out of a game couldn’t be simpler. Anyone expecting some depth to the combat will be disappointed, but for all-round family entertainment, this can’t be beaten.

No matter which version of the game you buy (excluding handheld versions) you won’t be disappointed. The Star Wars world is brought to life beautifully and the game is charming from start to finish. While not a major leap ahead of the others, the Xbox 360 release features graphical effects such as depth of field focus and HDR lighting, making it quite a looker. It also features some of the smoothest jaggy-free visuals I’ve seen in an Xbox 360 game. Sadly, it does suffer from some ugly tearing and slowdown, but it’s still the version to choose if you’re undecided.

On the audio front the Star Wars orchestral musical score is present and correct, and is enough to put a smile on the face of most players over a certain age. Sound effects are uniformly great, and although characters are limited to little more than grunts, they’re probably the cutest grunts you’ll ever hear. On the Xbox 360 achievement points side of things, you’ll get a fair few by simply playing through the adventure, but far too many require you to finish levels without dying – something that is far from simple.

If you have any fondness for Star Wars you’ll find Lego Star Wars II: The Original Trilogy incredibly hard to resist. It’s packed to the brim with fun and offers plenty of value despite what seems like a fairly short main story. All that’s really lacking is an online co-op mode, but get together with a friend or family member and there can be few better gaming experiences. It’s certainly not perfect, and suffers occasionally from clunky combat and the odd obscure puzzle, but on the whole it’s the best Star Wars game, well, since Lego Star Wars. 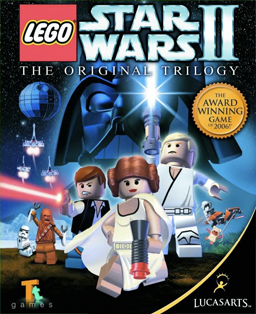